So, last February I had this sudden impulse to just go to Athens, Greece; see the Acropolis. And I had to go NOW! I don’t really know what preceeded this inclination, but I usually go wherever my impulses tell me to, and now since the world has turned absolute bonkers, maybe that was the sole reason…

I had booked what I thought was a cozy room in an alley along Adrianou, where there are plenty of restaurants with lovely outdoor seatings. A large tourist area, centered around Monastiraki square. There’s a metro station on the square, which functions as some sort of a junction, so I could easily get anywhere if I for some reason didn’t want to use my own two feet to walk there.

The location was nothing less than perfect. 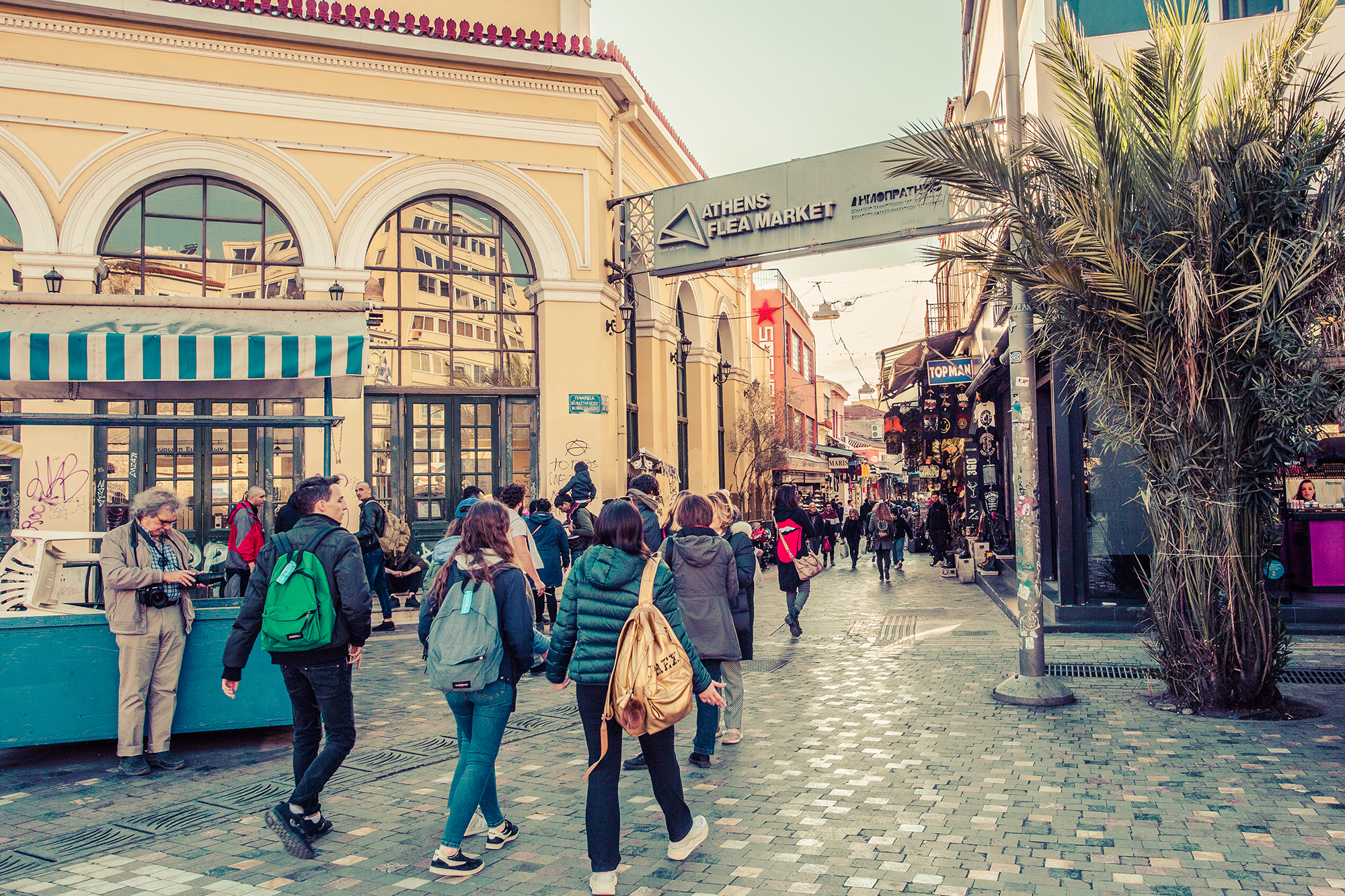 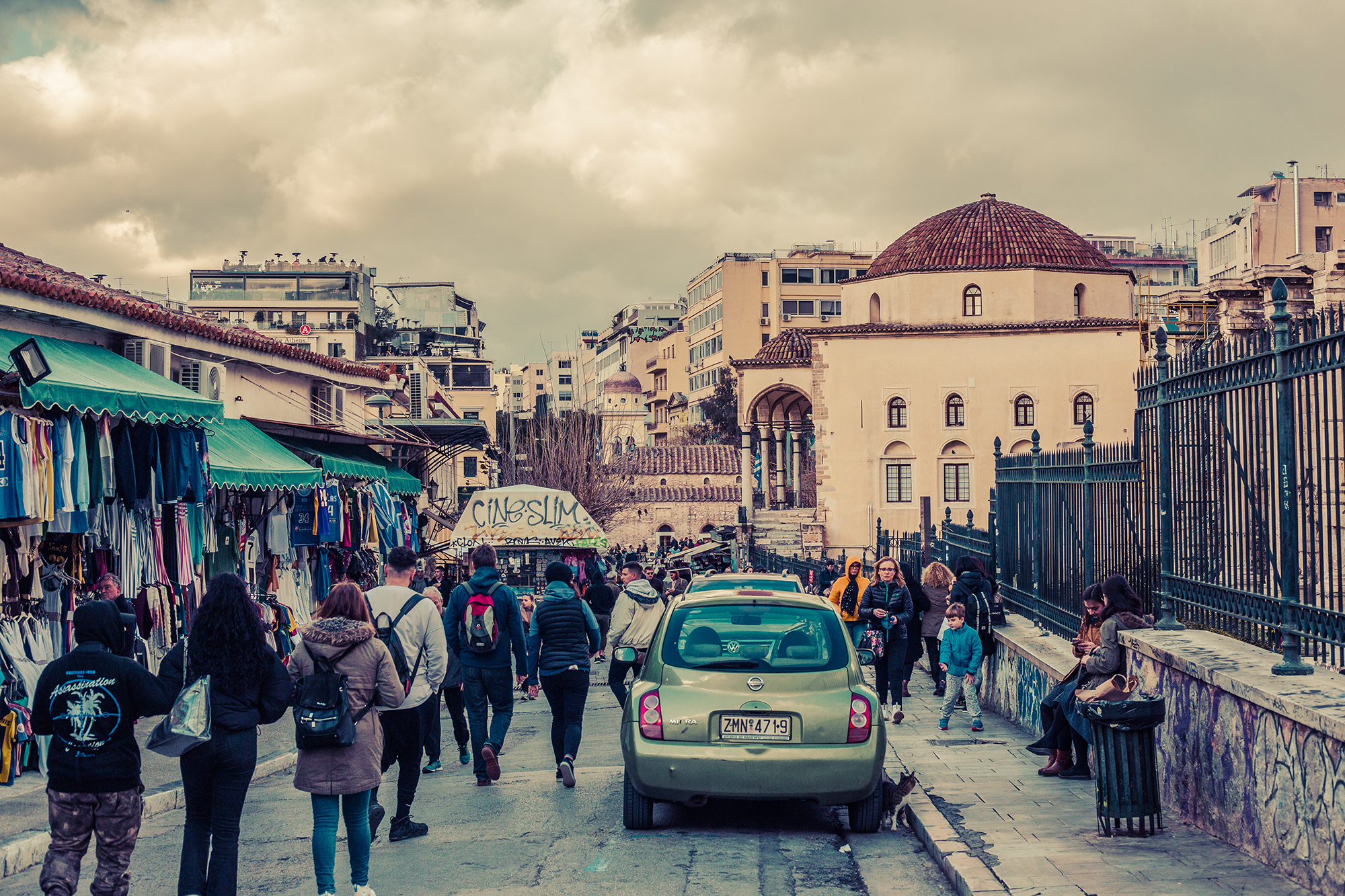 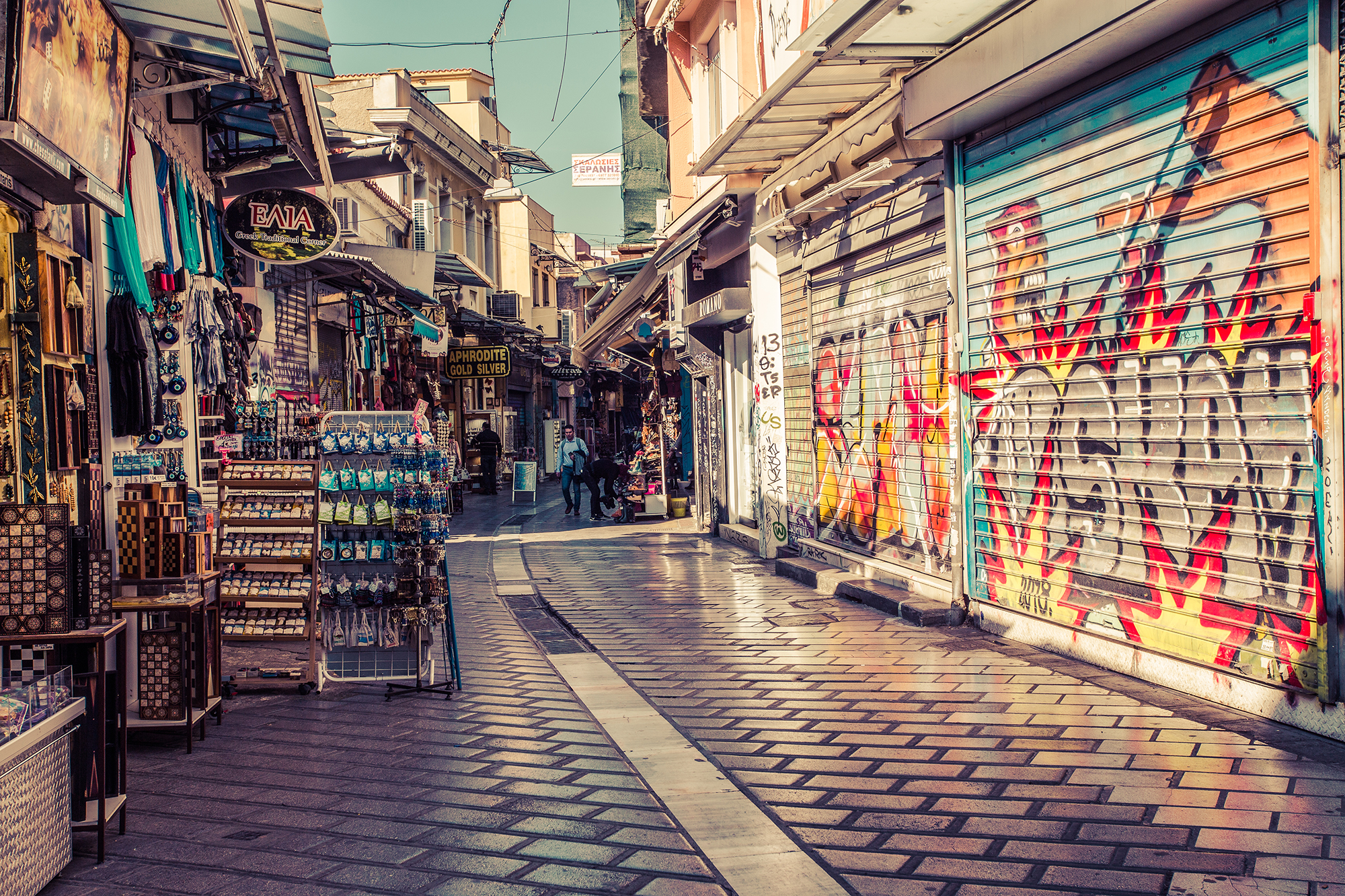 The booking was made through Booking.com. As per usual. And as per usual the room looked so cozy, with a view over Acropolis. I’m not sure what doesn’t have a view over the Acropolis in Athens, but still… Acropolis is after all a cliff on top of the city, looming over the city… As the whole accommodation thing played out, I could probably write a whole post about it, but I think I’ll resist the temptation.

A shortened story it will have to be… 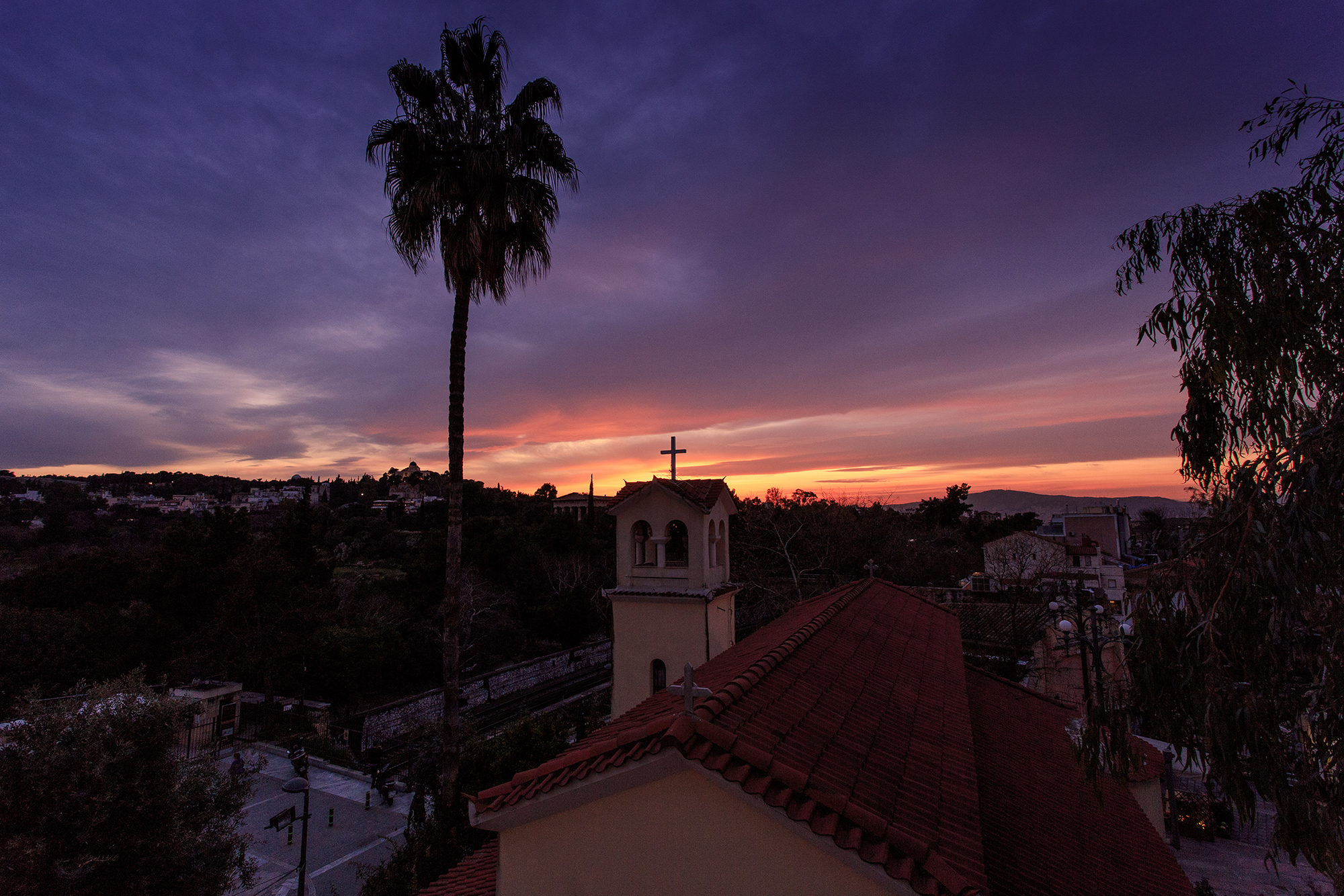 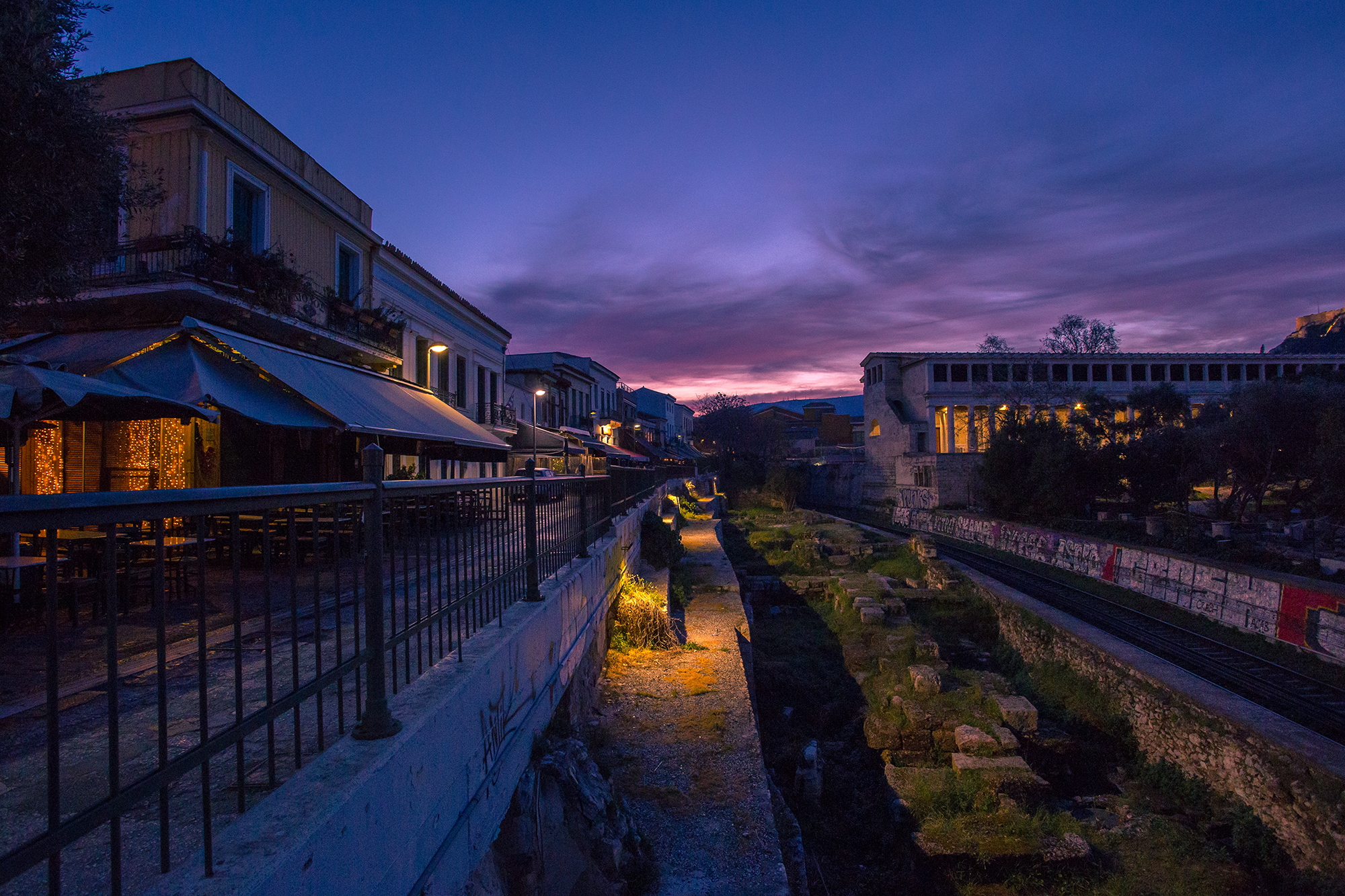 Already upon arrival, things got out of hand. They had forgotten to leave the keys outside for me and the driver they had gotten for me. So he had to take an extra drive to pick up the keys. When entering the room I discovered some overly ambitious person had pulled the heater’s plug, which was located way up there – about 3 meters up. The room had crazy high ceilings! Gorgeous, sure, but nonetheless a hassle when you couldn’t reach the plug!

Being an empath and all, I, of course, felt sorry for the driver, so I just laughed it off. We could fix this in the morning… sure… I mean I’m a Viking after all, so how cold could it actually get for me? In Greece!?

Greece has been Swedes’ goto-sun-paradise for years, after all!

So, ok, sure… Even though I had put on all the clothes from my suitcase, including my winter jacket, and the down duvet in the room, I was still shaking from the cold. The following day the owners tried to blame the driver for the misfortunate situation and it just kept on going. If I even was lucky enough to get hold of them, they always blamed someone else. Preferably a completely random person. During the 2 weeks I stayed there the problems just kept showing up. The Wifi was sporadic, however to my and the other guests’ enjoyment, I managed to solve that problem without much effort.

The only positive thing with the accommodation was the location = unbeatable.

The hot water was also sporadic – there it came and there it went – but when it left it stayed away for a couple of days. Each time. The owners, who weren’t physically there, wasn’t all that interested in fixing stuff for their guests. So it took them a while to try and fix the problems – any problem. 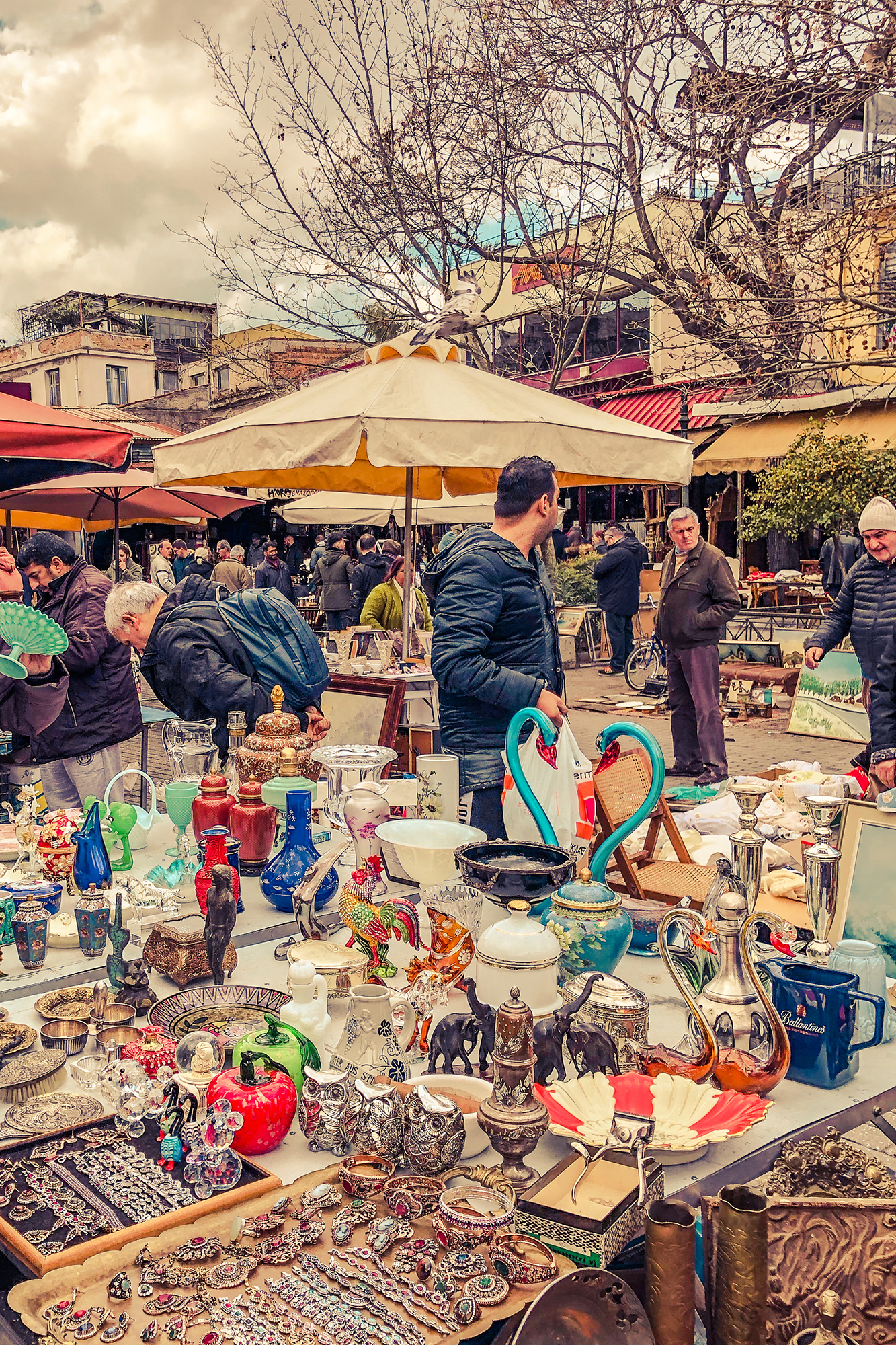 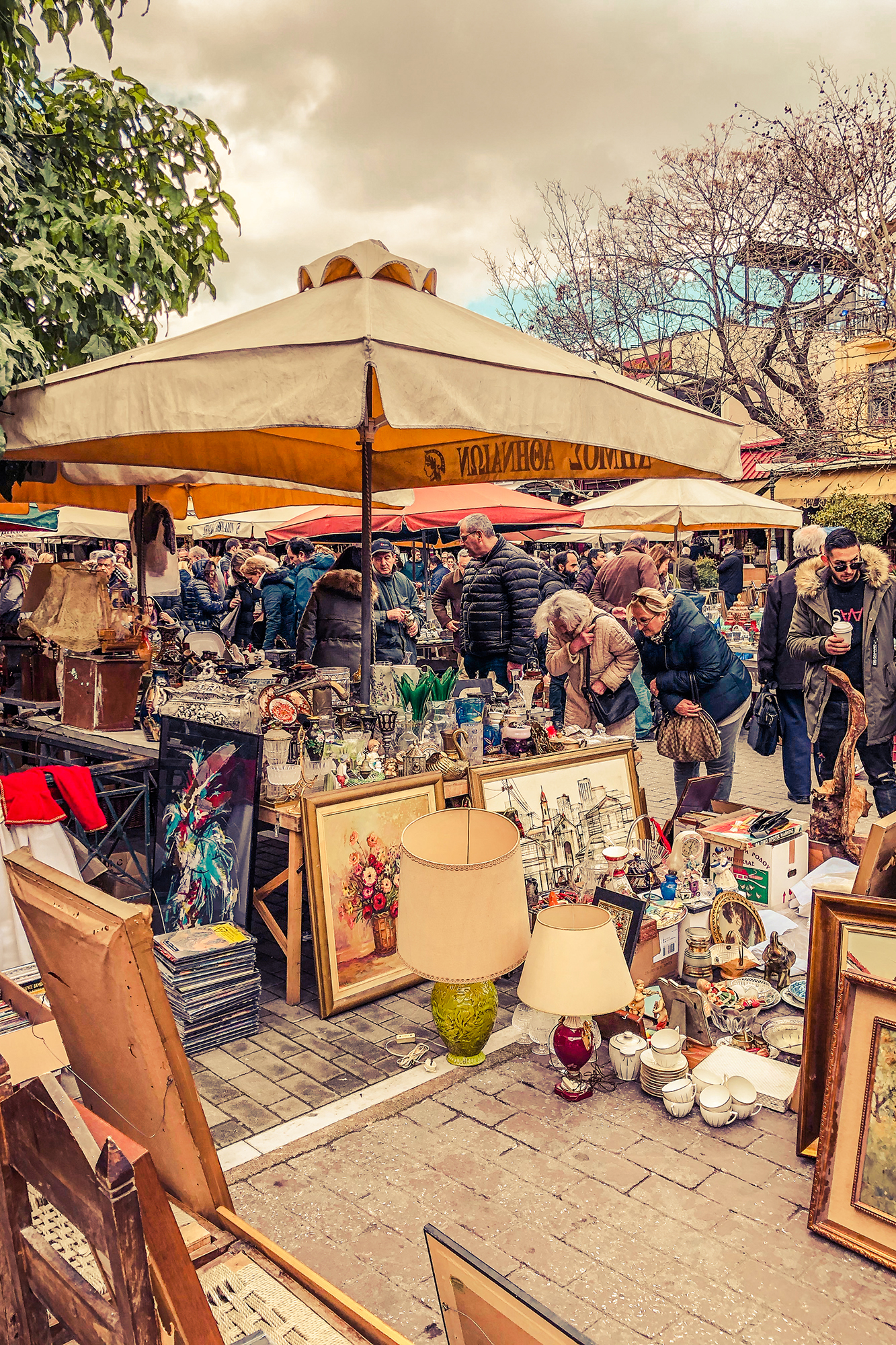 Athens was really refreshing. Exactly what I needed. I just love wandering around in old ancient history, while I’m at the same time in a modern city. Kind of like Istanbul, a mix of the old and the new. Amazing. Cities like that have such special energy. Pure magic! 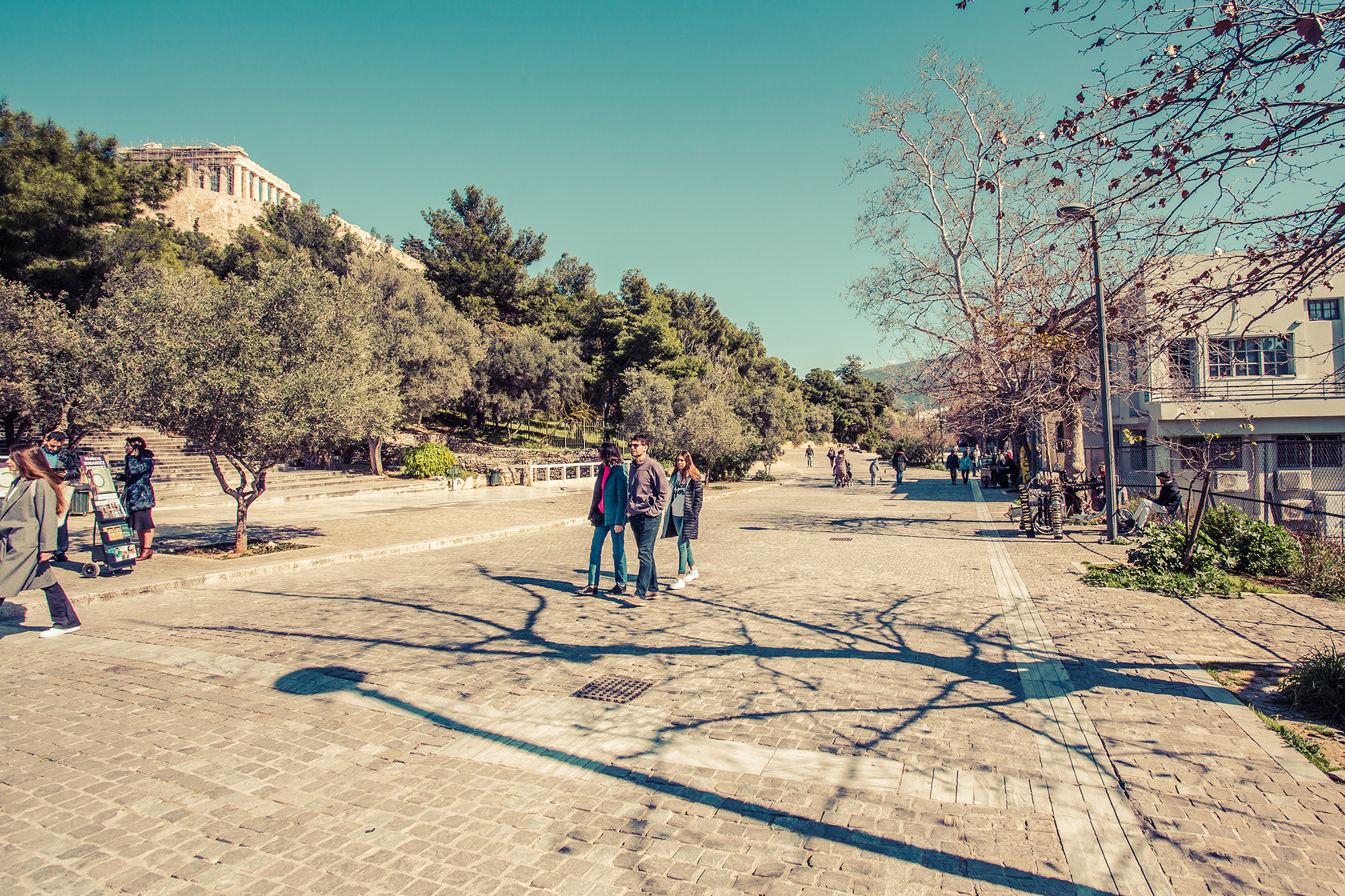 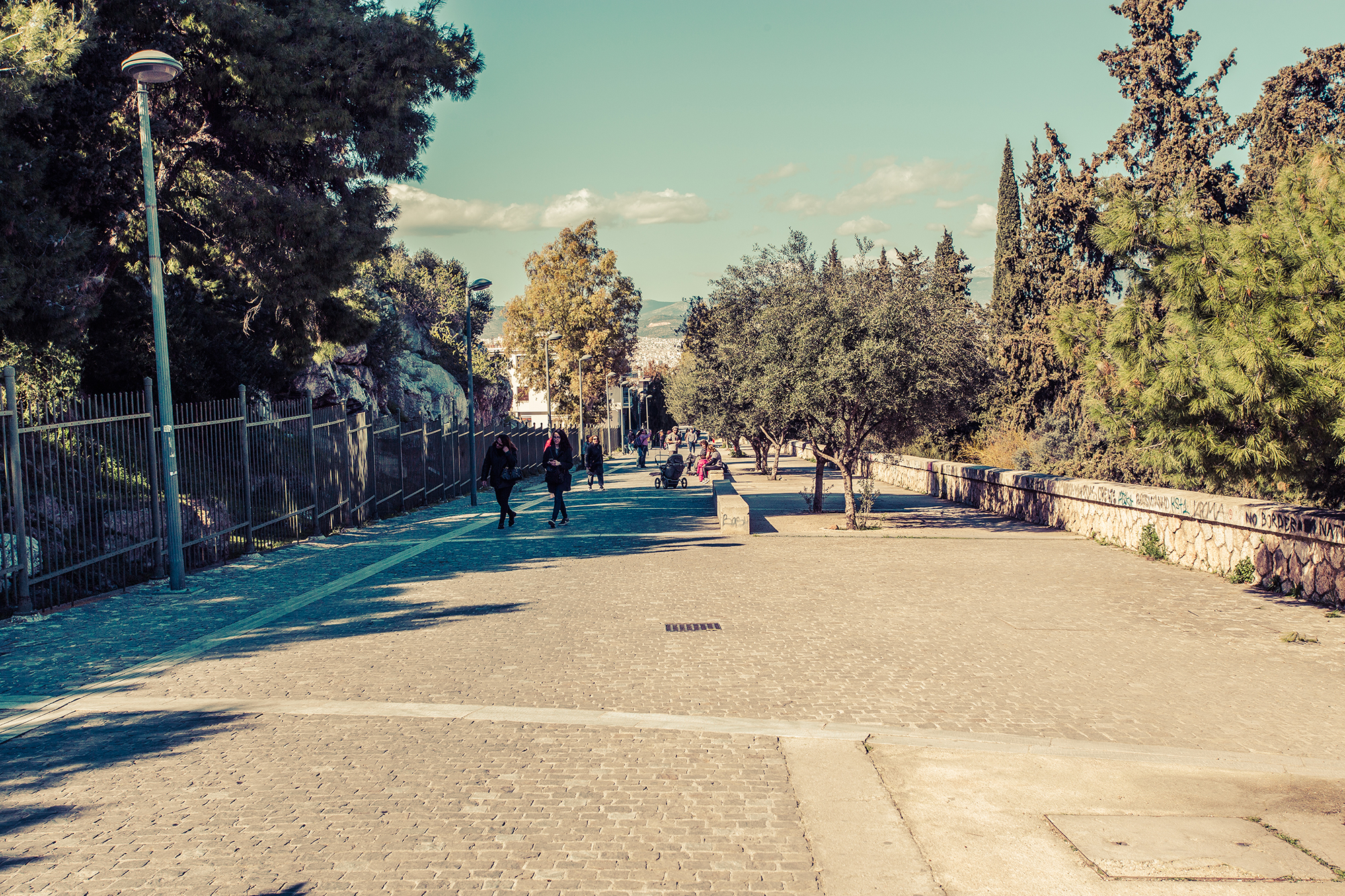 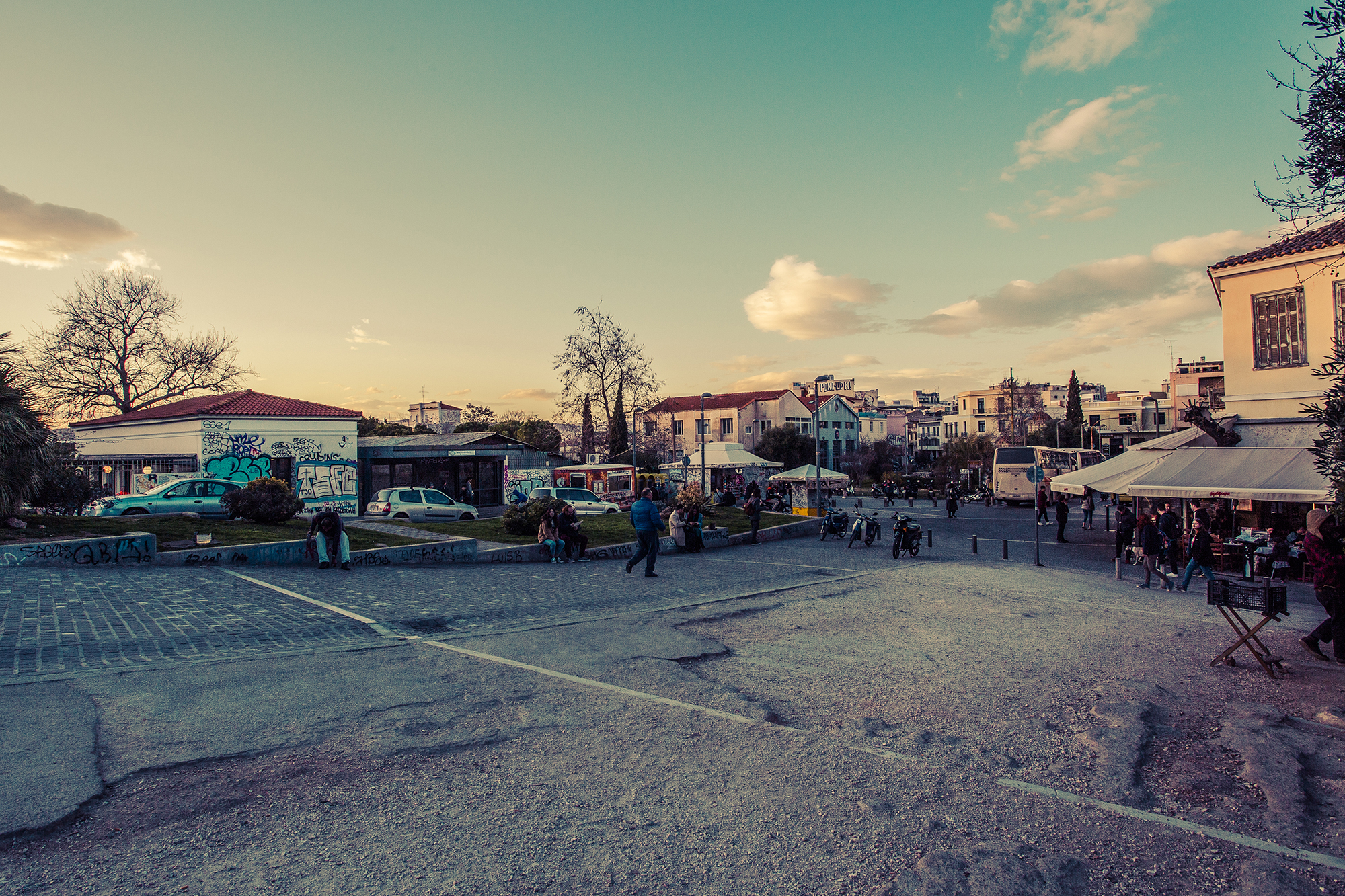 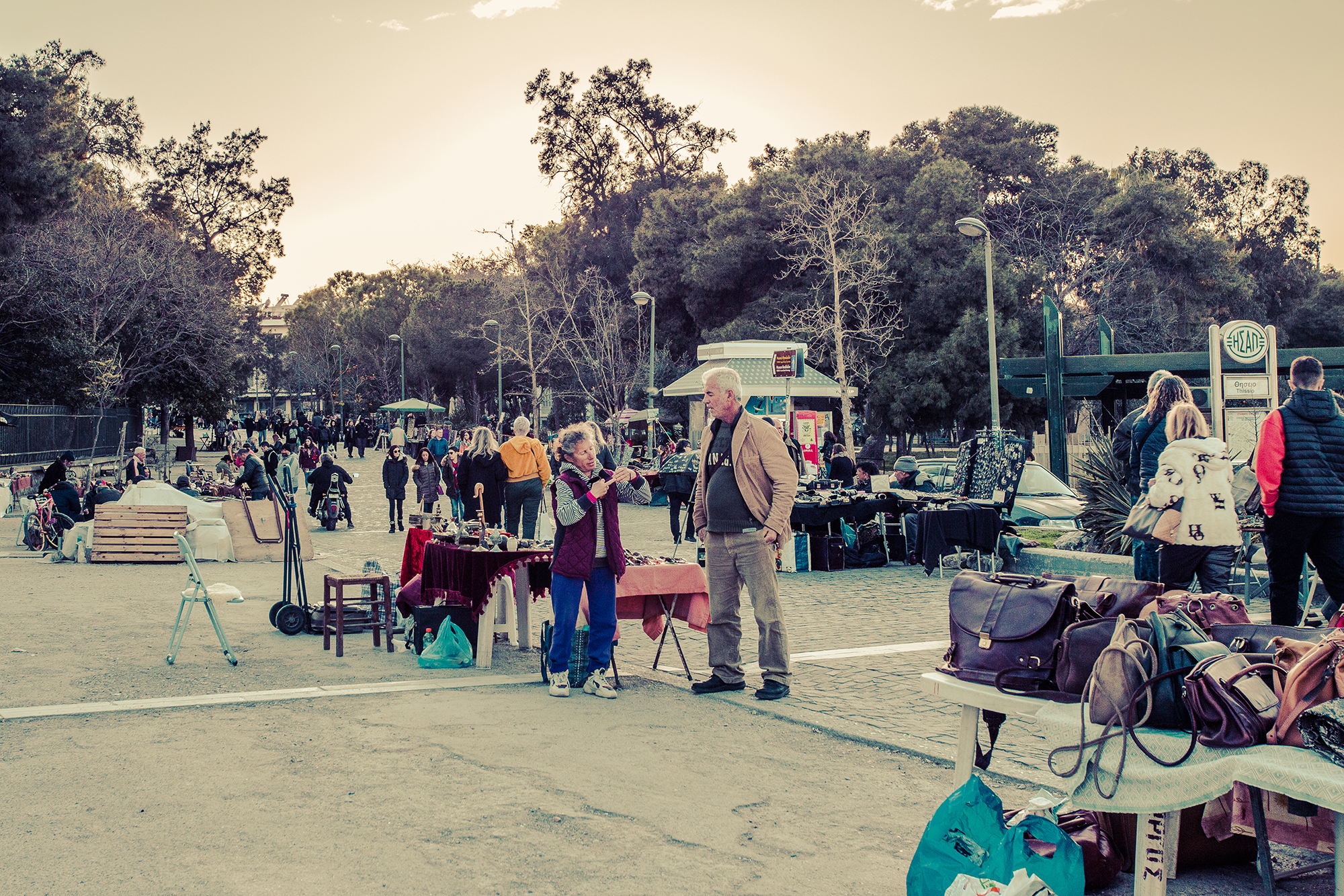 In Athens, Greece, I visited plenty of ruins, and needless to say, Acropolis several times, actually 5! It wasn’t cheap, but that magical atmosphere up there was worth every penny.

I also spent my time on touristy stuff; travelling on a hop-on-hop-off bus. It was actually way more fun than I’d expected. I got to see parts of Athens I otherwise wouldn’t have had the energy to get to on my own feet. Unfortunately however, it was freezing cold (double-decker with the top outside).

I hadn’t brought enough clothes and far too few blankets, i.e. none! 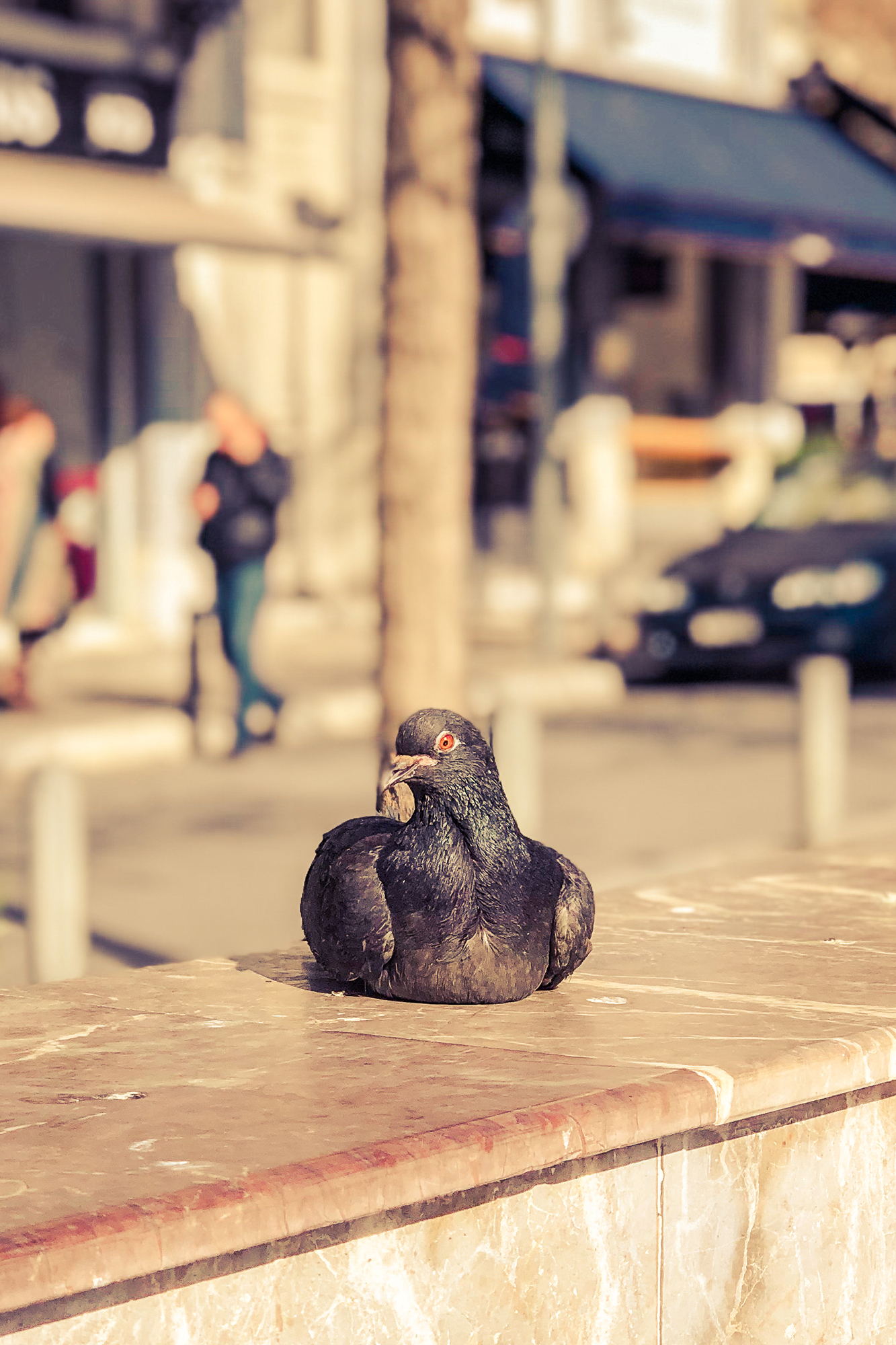 So, even in Athens people seemed to like cats, and there are cats everywhere. People are shamelessly feeding them openly on the streets, and they also put out water bowls for them. All over. Every time I got to see this I got all fuzzy inside. After all, there actually is hope for humanity. 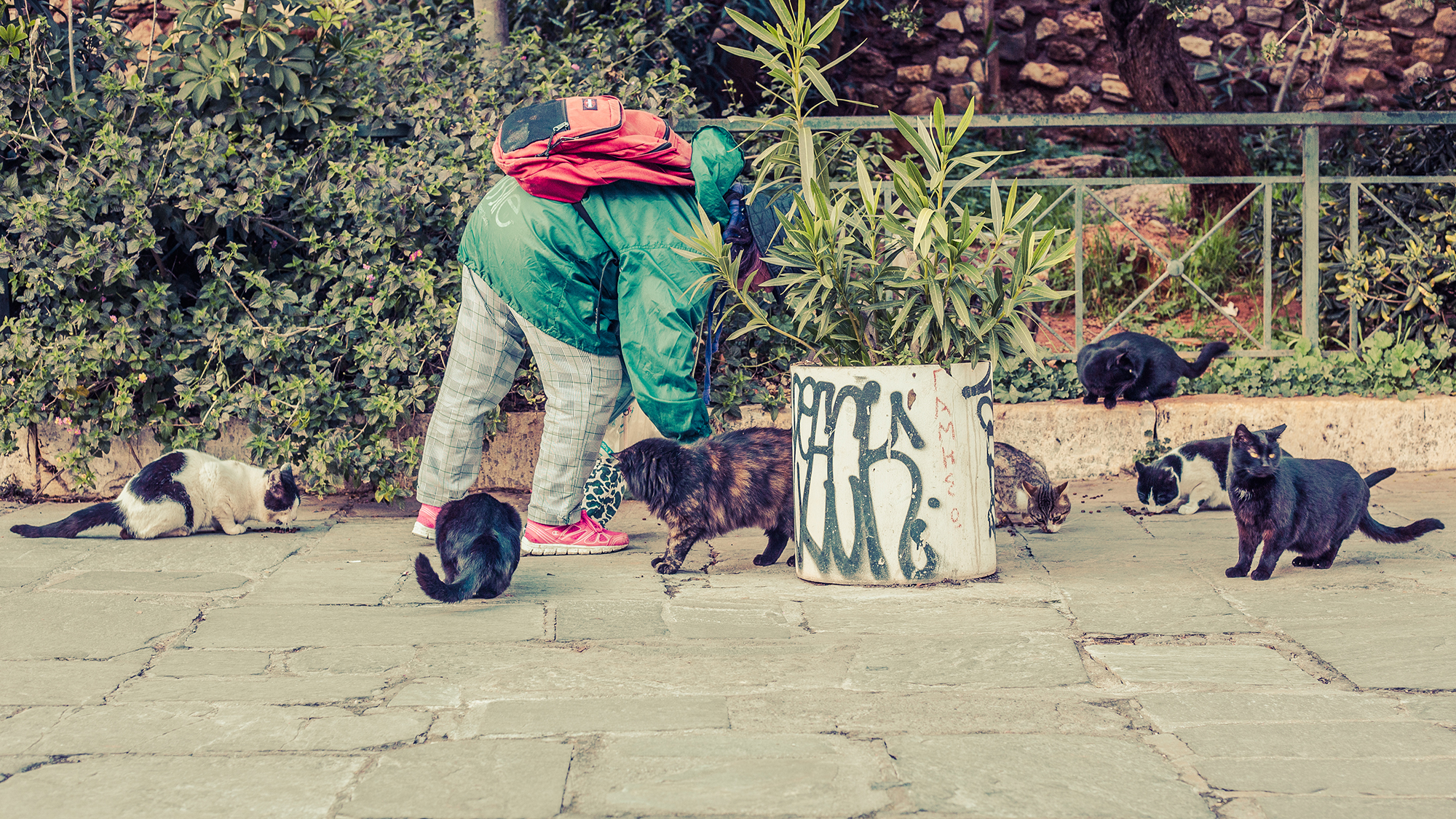 I also got to visit an ancient cemetery, but only a short stop where I met a cute cat. I was so thirsty and hungry, though, so I didn’t have the energy to run around. I figured I’d return another day. Well, sure, that didn’t happen… 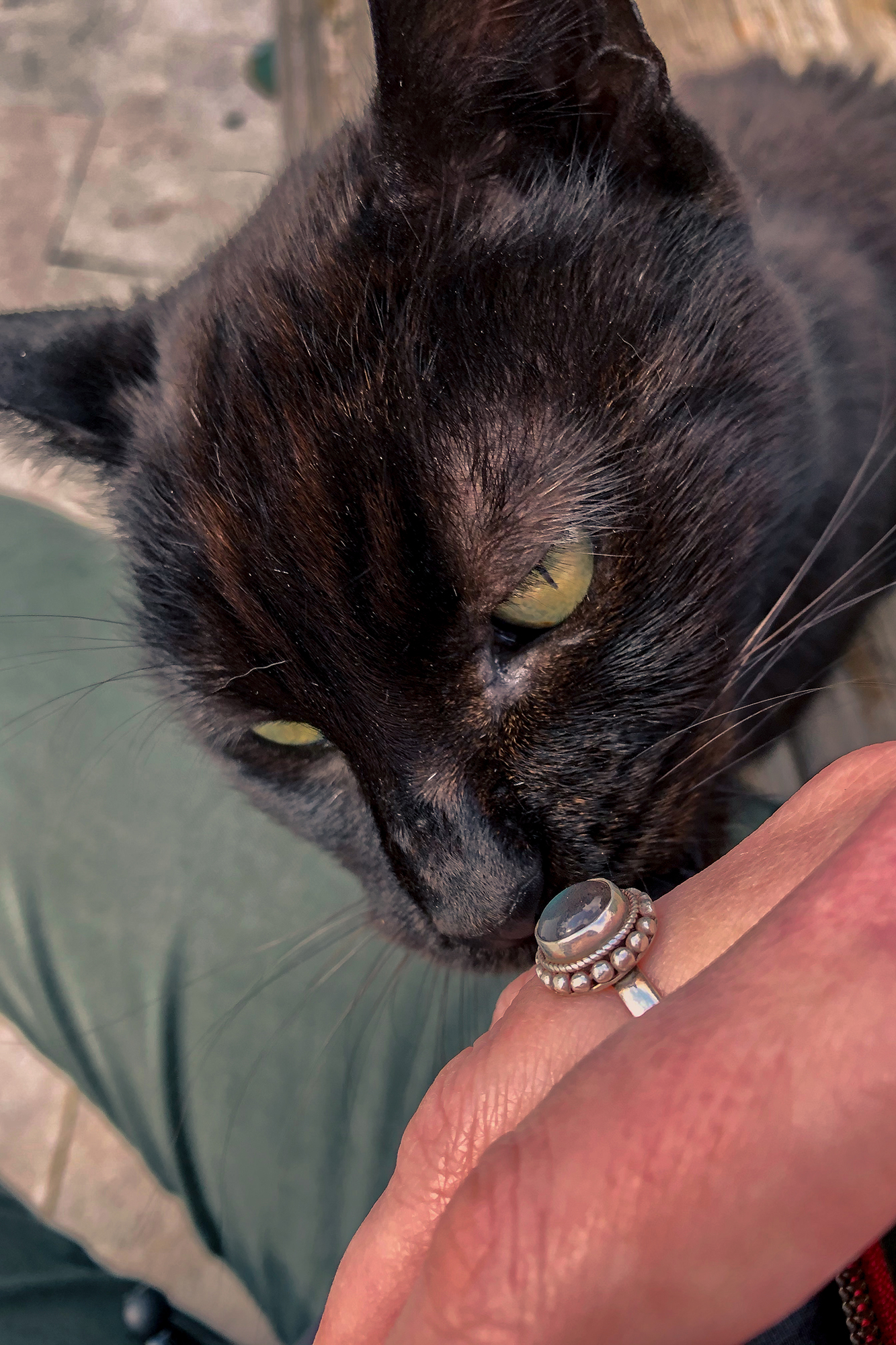 There is a very lovely picturesque neighbourhood in Athens called Anafiotika, with lots of old and colourful houses, tiny alleys and what else? Well, cats. Somewhat struck by this influencer disease I ran around like a crazed moron to find this specific house and those specific stairs with plants on. I had seen this on Instagram, and Pinterest, of course – so perfect.

Running around like a mad man, until I suddenly realised what I was doing and instead got annoyed! 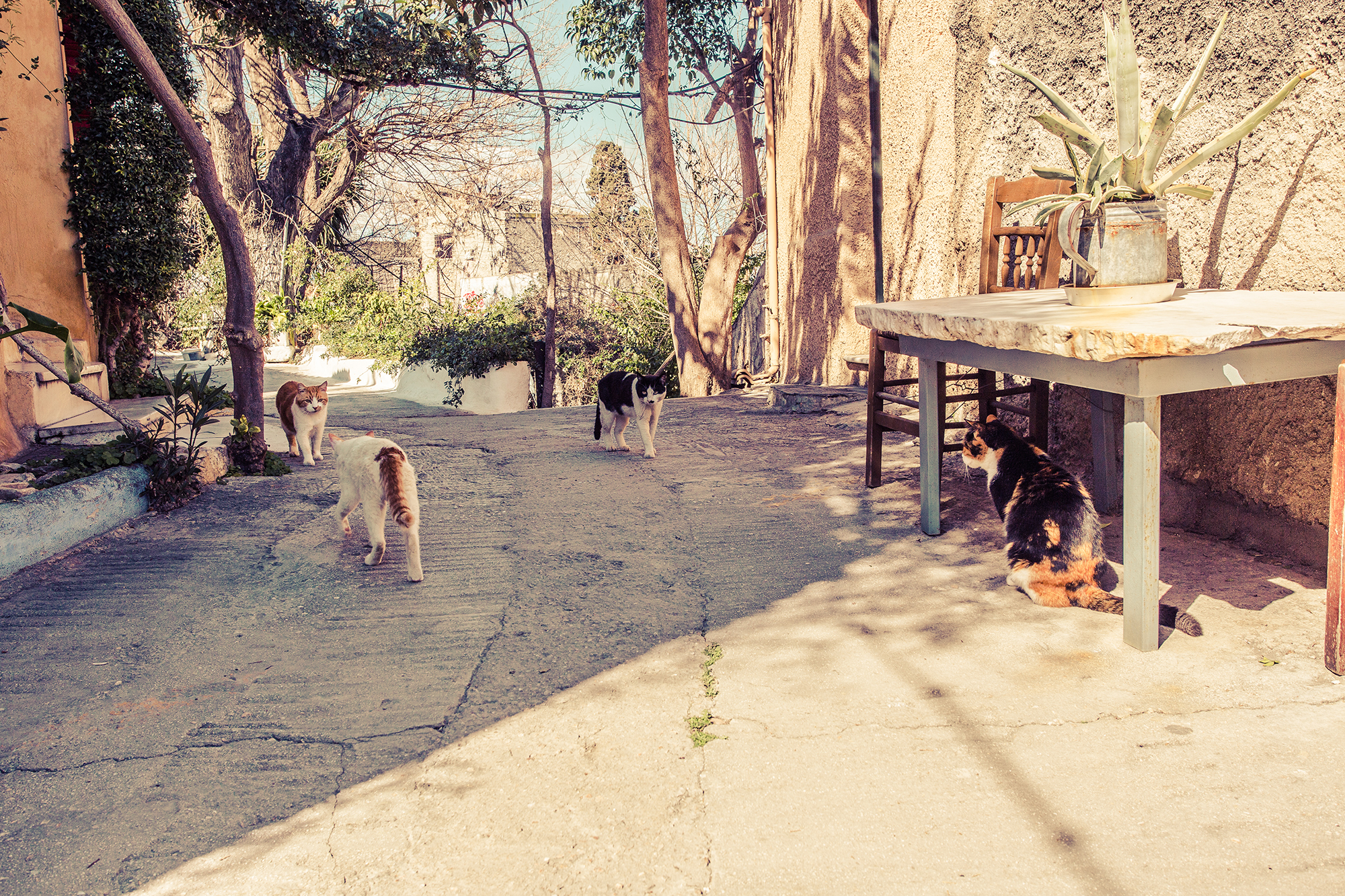 Was I really such a fool? Couldn’t I just find my own stairs to photograph? Find something slightly more unique…? 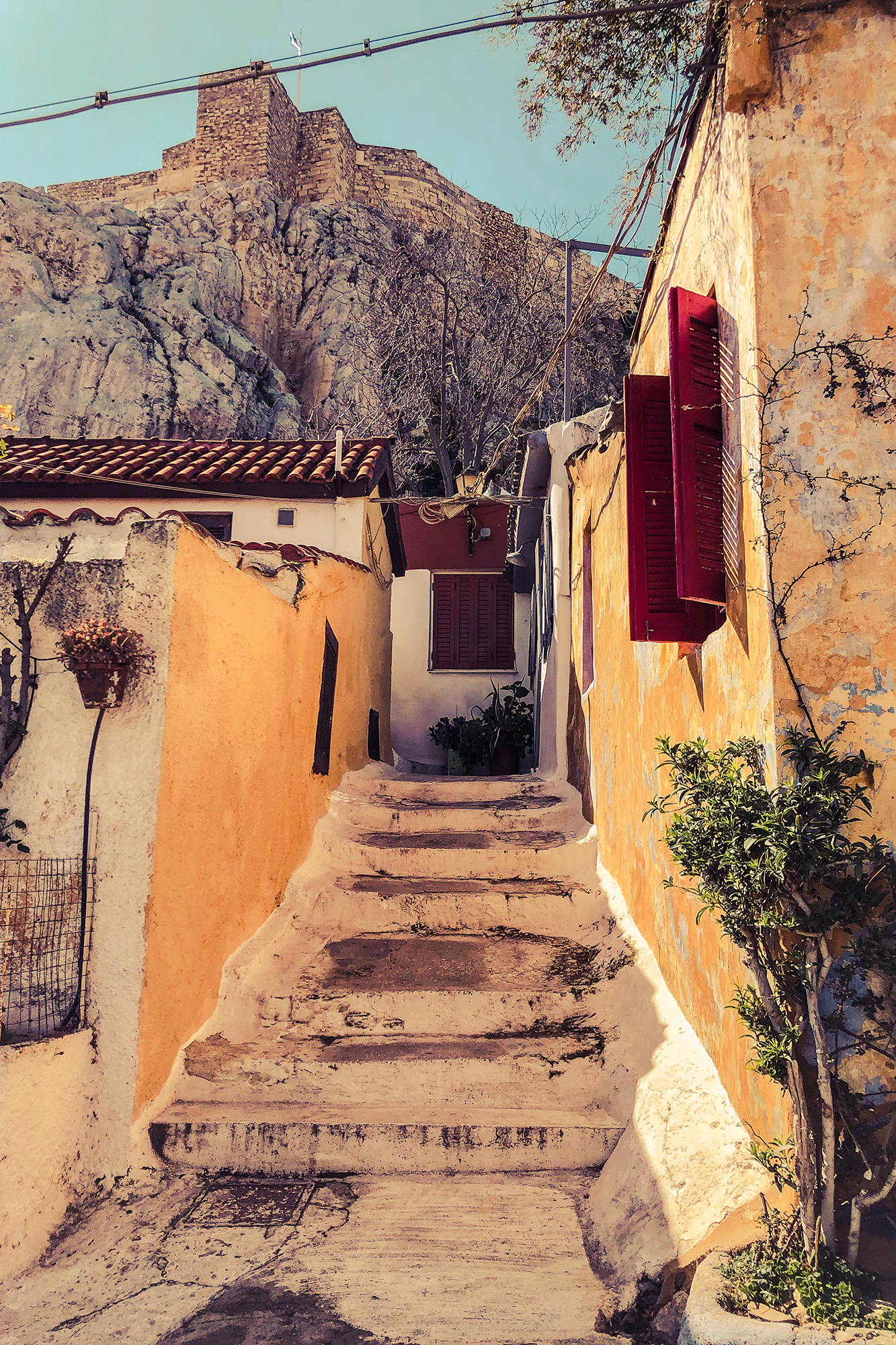 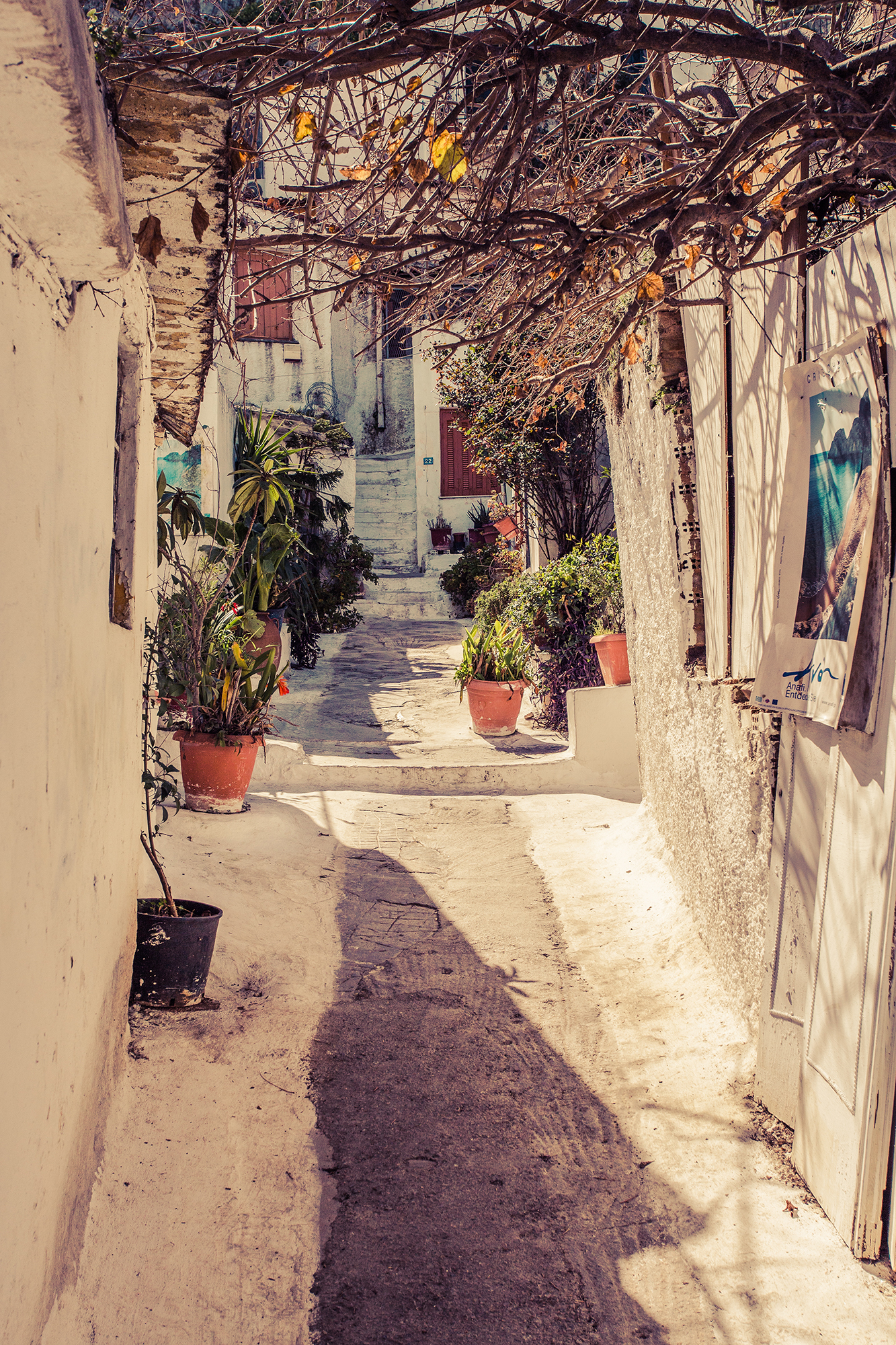 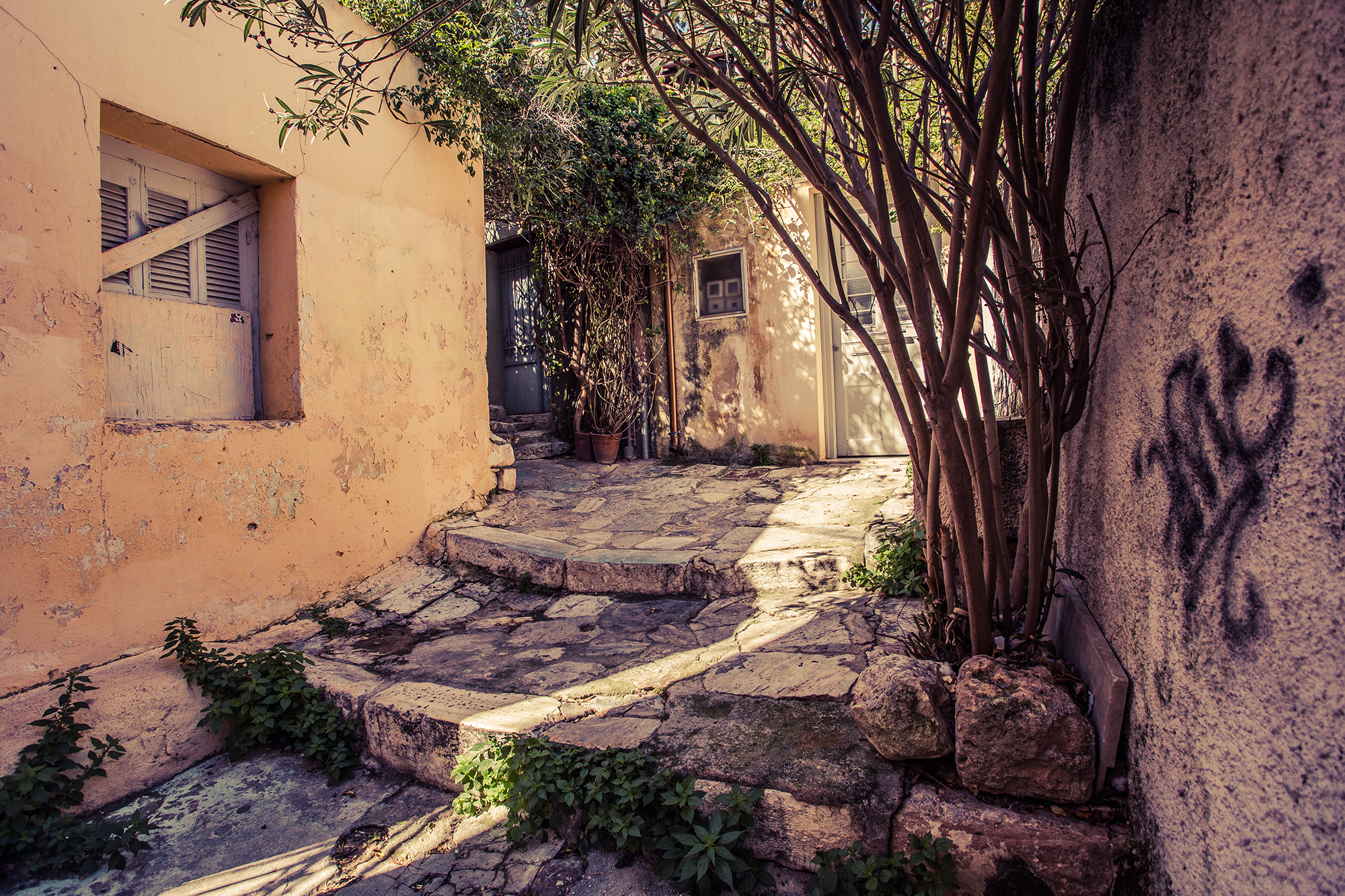 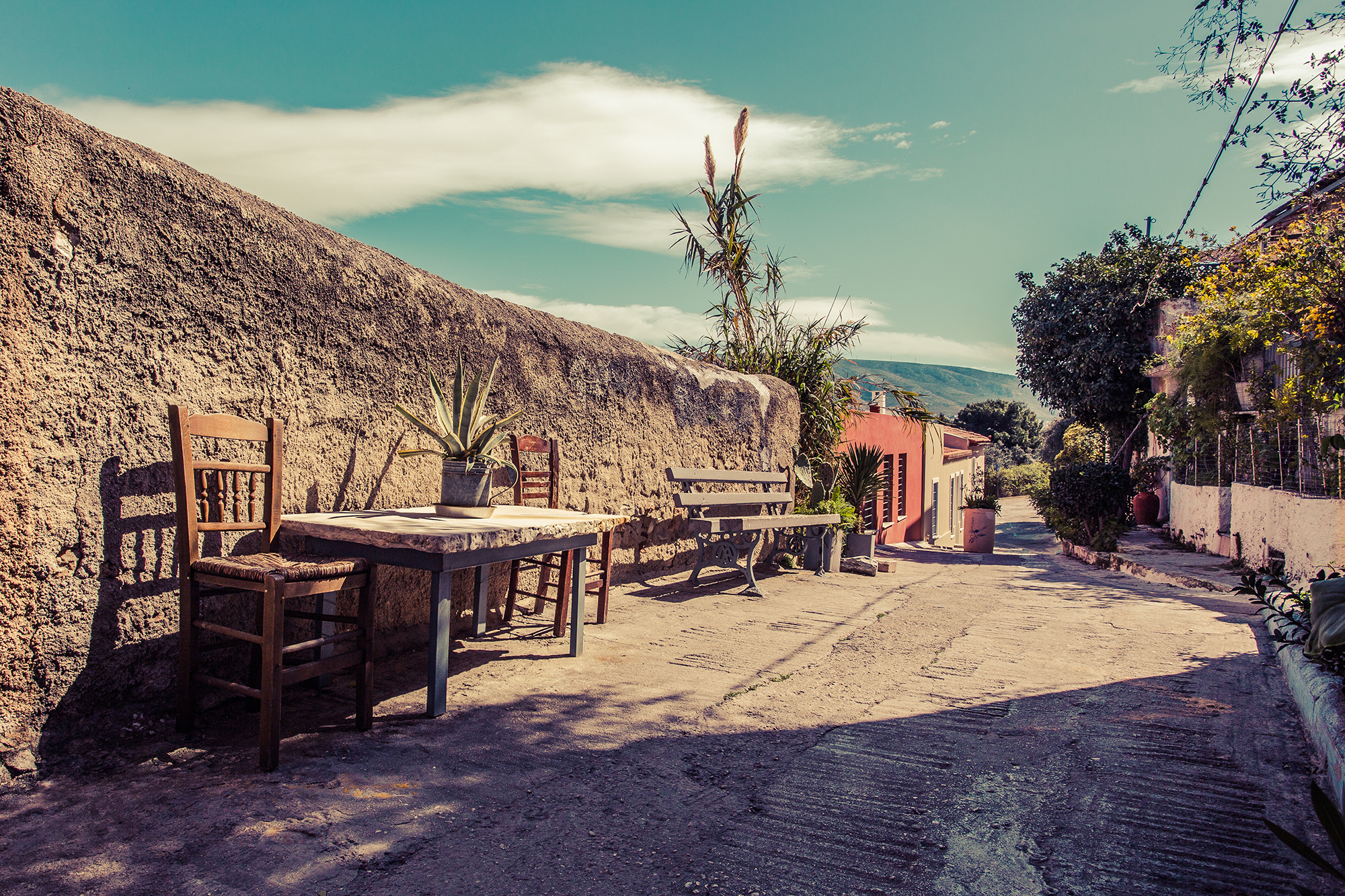 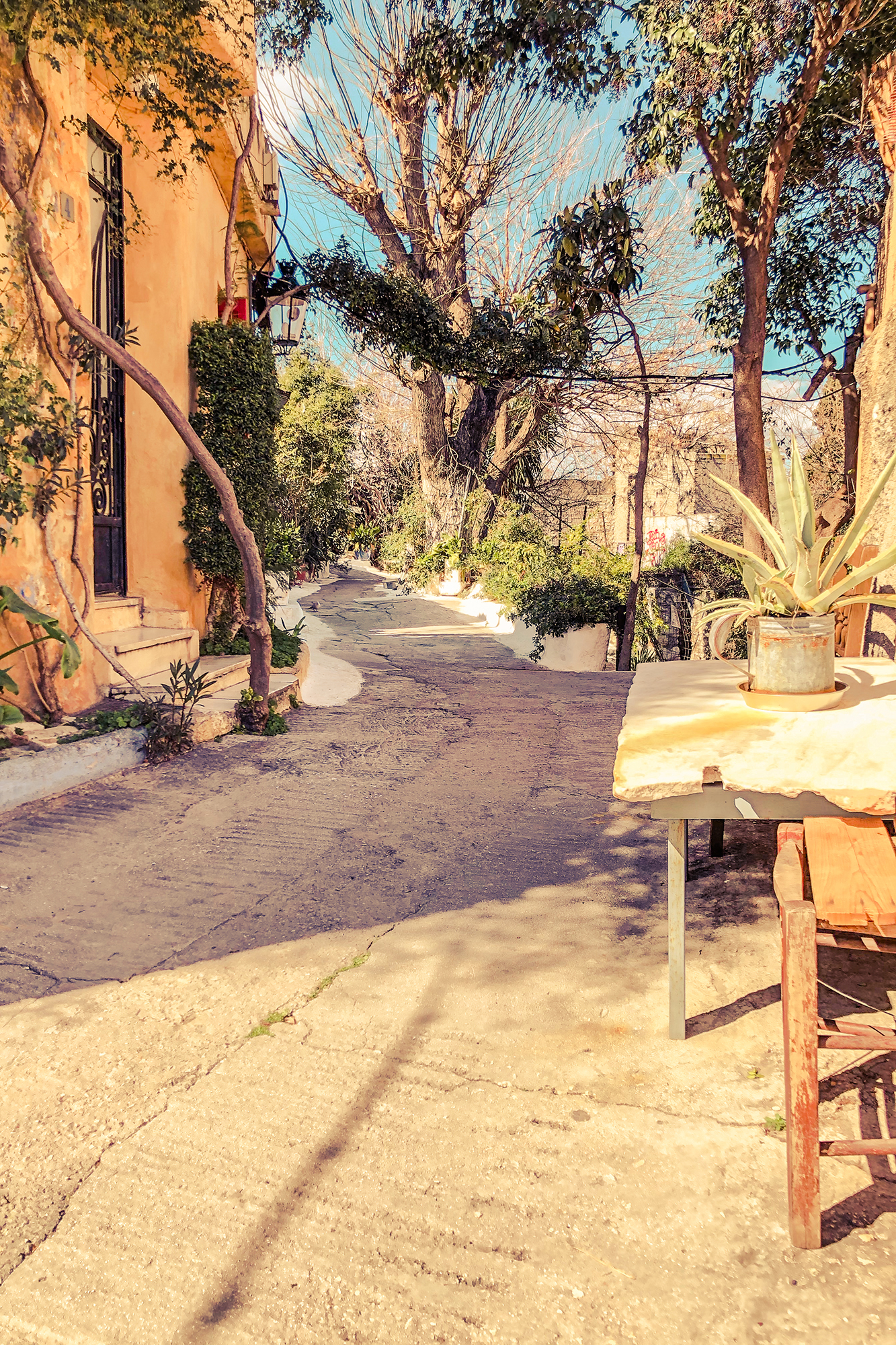 My main troubles in Athens, Greece, were probably food. It’s always exciting with a new country/a new city, what to eat? What’s special here? I usually prefer to eat the local food and don’t enjoy random international restaurants, or even worse – “Swedish” restaurants.

I’m equally not particularly interested in eating the same type of vegan food I can eat at restaurants back home, or in other parts of the world. I don’t really know how to describe this vegan food, but it seems to me like it’s some kind of mainstream vegan food (and I’m the only one who doesn’t like it!). This is not at all exciting, it’s boring and not connected to the country’s local food.

In my utopia all food could be served vegan. Or why not on trees… 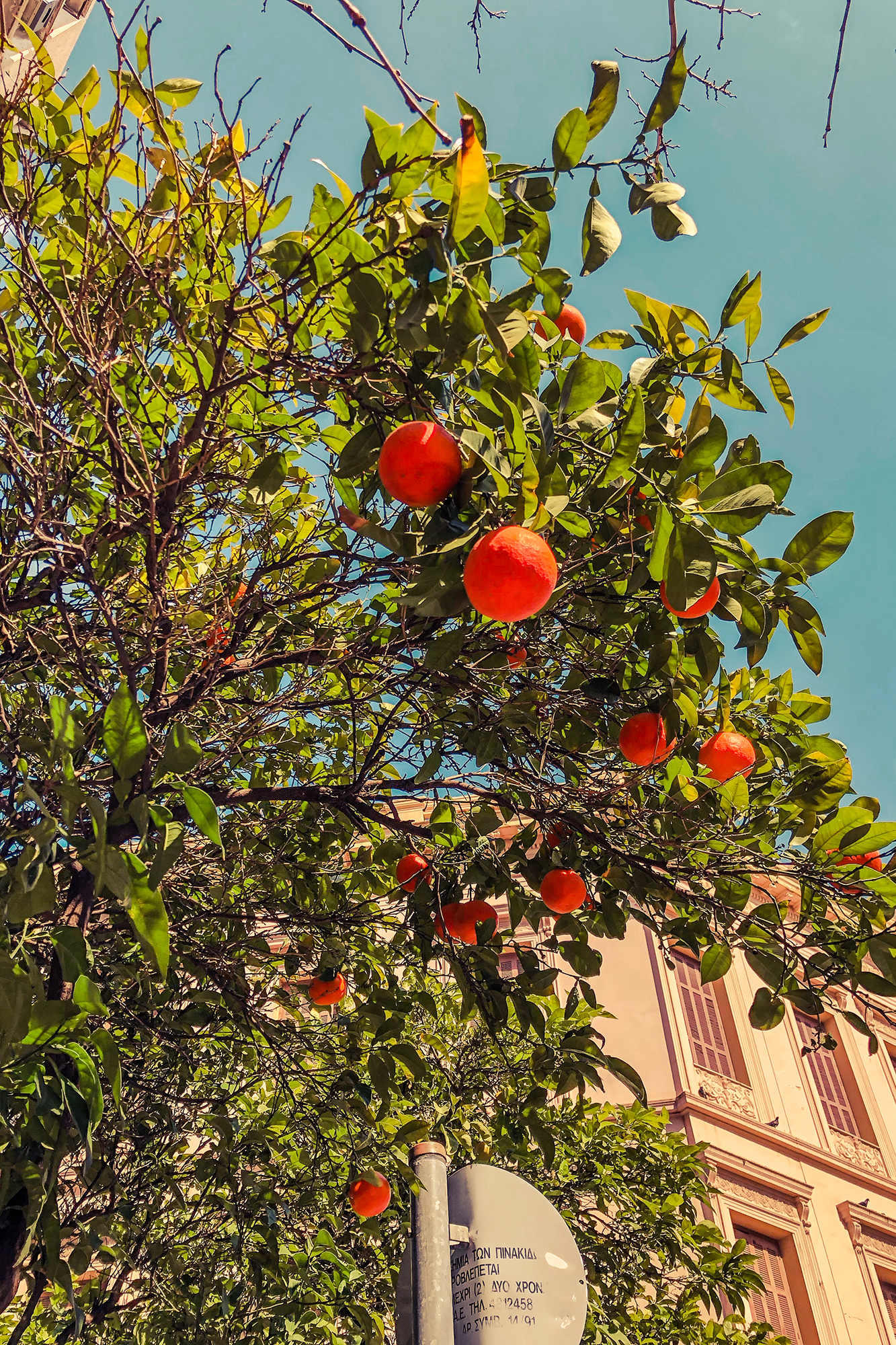 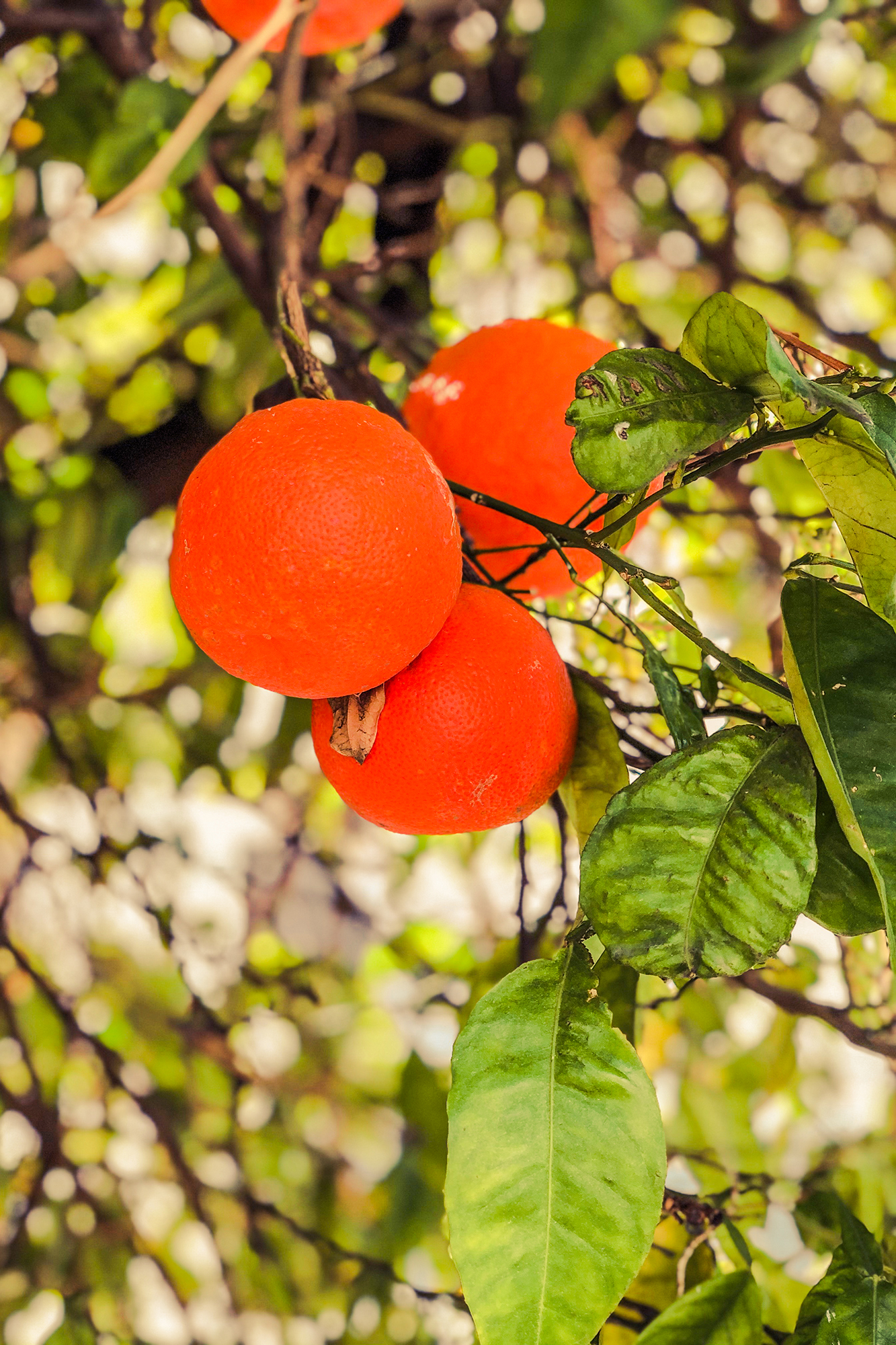 By the end of the trip I had actually found a couple of local shacks where they served simple ordinary Greek food, even in the expensive neighbourhood I stayed in. Admittedly for a slightly higher price tag than normal, but nonetheless. The restaurants in the said area seemed more focused on some kind of tourist crap with random pastas and grilled animals.

Smoothie bowls are not really for me.

Breakfast was usually some spinach pastry of sorts or just freshly baked bread, juice or smoothie. Simple and tasty! I tried out a smoothie bowl, but it only gave me stomach ache actually, because it’s such a cold dish.

Street food is the shit…

It was usually falafel for lunch and/or dinner since this was the easy go-to-vegan dish. Just needed to make sure the sauce was vegan, and that’s it. The pita bread was a lovely surprise. Not at all as the ones you buy back home, this was all fluffy and soft. I had a few gyros, but without the meat, of course, and with more vegetables. The bread was just… wow!!

At times I got so sick and tired of falafel, so I found me an Indian restaurant. I, however, was in Athens, Greece, thus I wanted to eat Greek food. But for some reason, there seemed to be cheese in every vegetarian dish they served, so it was a bit of a hassle. Sure, I could’ve just asked them to remove the cheese, but… Vegan didn’t just seem to be that common. Or I was lounging in the wrong neighbourhood…

Athens, Greece… a city you have to visit at least once in your life…

Apart from my food issues, I enjoyed Athens. I liked that no matter how cold the evenings were, the people were out and about – hanging out on streets and squares, dancing and singing. There was so much life everywhere.

Greece’s population is roughly the same as Sweden’s, about 10 million, and in Athens’ metropolitan area there are 3 million people. The city has more inhabitants than the Swedish capital of Stockholm, but I don’t think that would’ve mattered in this case. Greeks are relating to each other in a completely different way than Swedes do. Well, Swedes don’t really hang out, we’re just shutting ourselves inside… 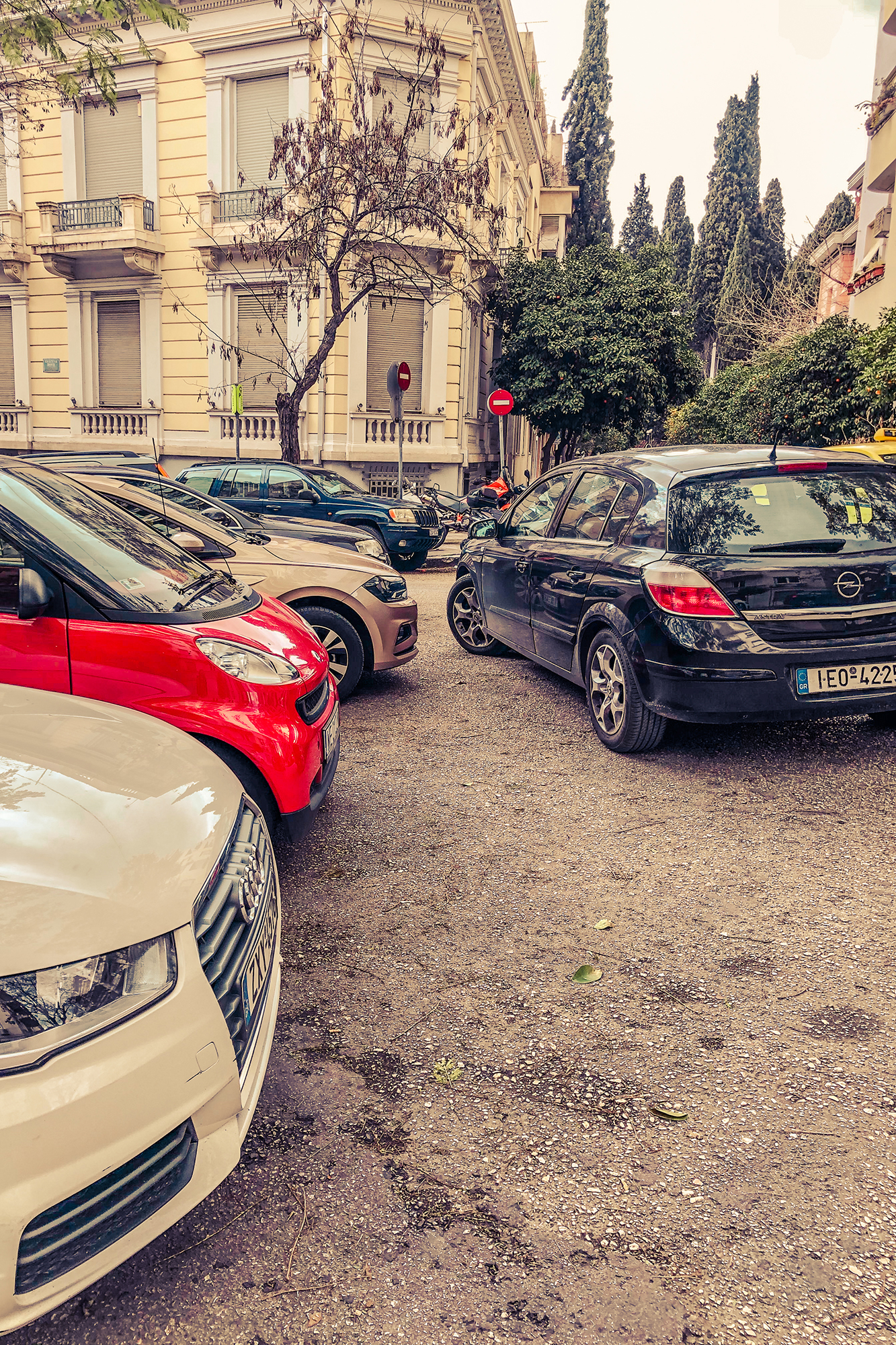 On the Monastiraki square, there were performances every day and night. People were happy and dancing, the outdoors seatings around the square completely full, in spite of the outside being a complete freezer. The weather was similar to a cold autumn evening here in Sweden. But instead of doing it the Swedish way – lock yourself inside – the people just put on some more clothes, because… no FOMO on hanging out.

I am an introvert after all, but this was weirdly enough quite appealing to me.

I remember how I enjoyed cycling into the city of Yangshuo whilst in China. Along the road I saw old people outside everywhere, just sitting there playing board games, hanging out, talking and laughing. We don’t really see our old here back home, they are all trapped inside.

I believe the lack of human contact is what makes us Swedes sicker and sicker, because we’re losing the spark of life. 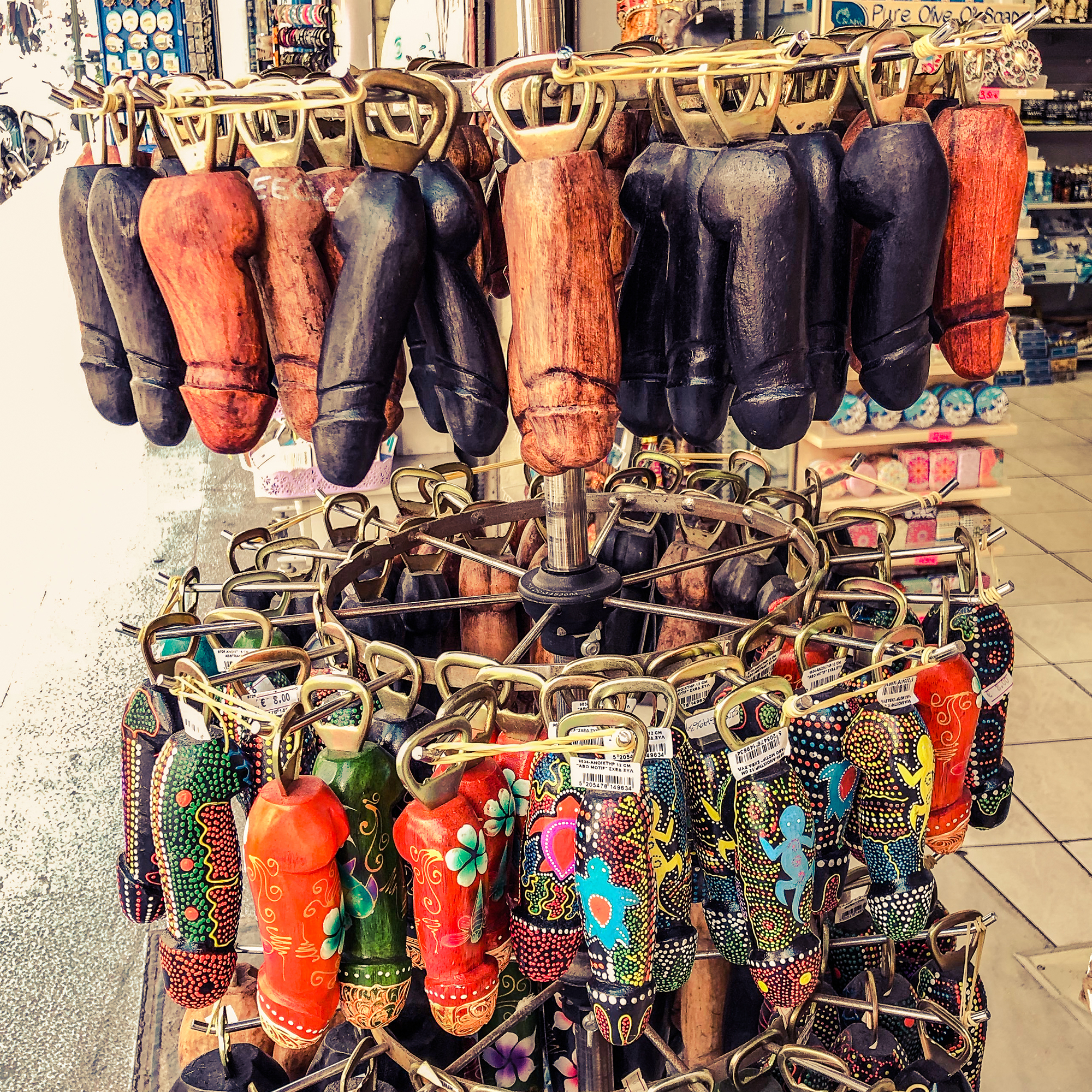 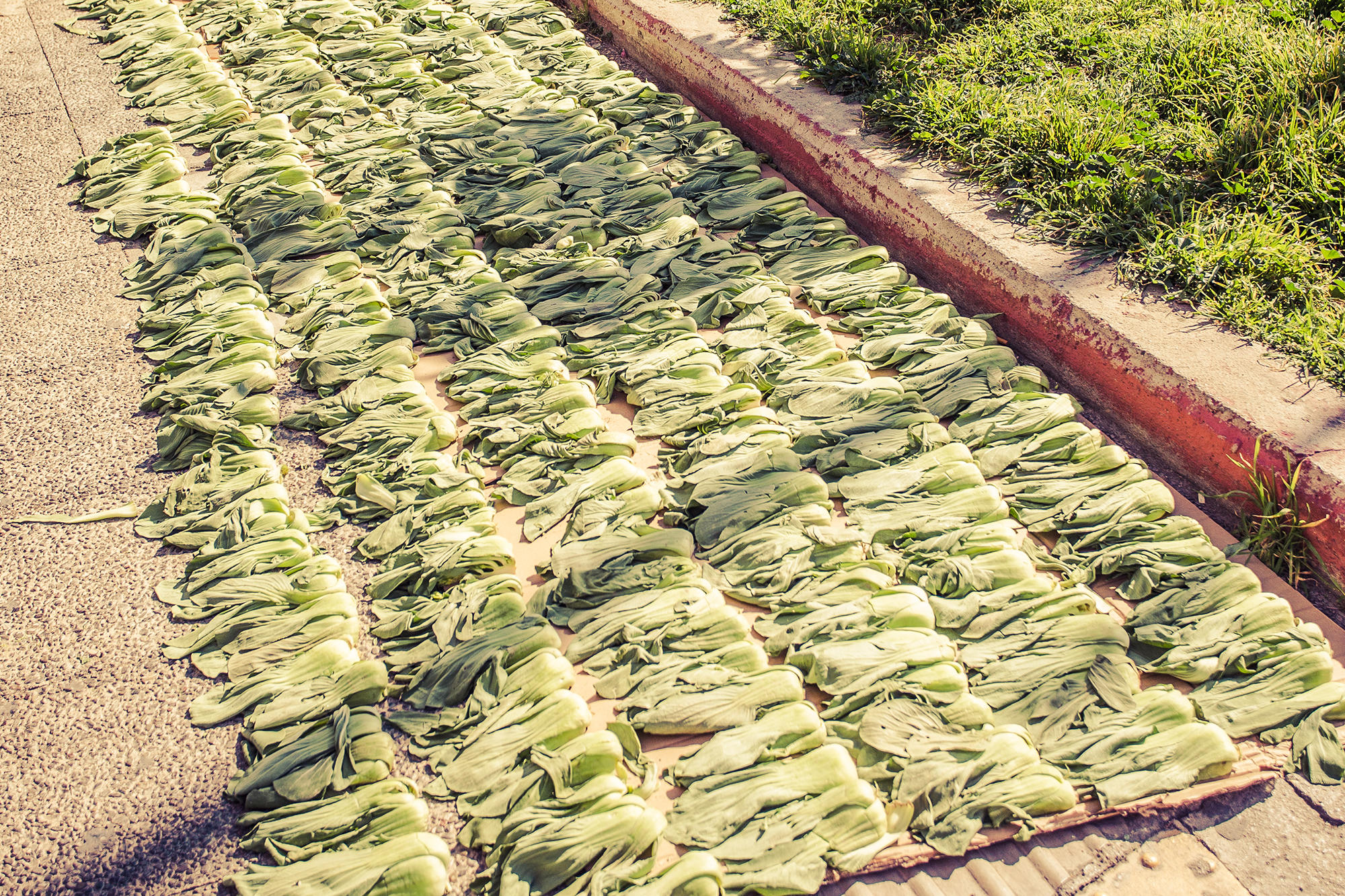 And here too… vegetables on the ground… For what purpose? I saw this in China as well.

I was out and about on the square quite a lot, enjoying the atmosphere. It was so multinational, and that is something I truly enjoy. The mix of cultures. Human beings are meant to mix and blend. We all belong to the same race, and I just get completely nuts when I hear people dividing us into skin colours, nationality, or whatever criteria.

We are all same same!

Have you been to Athens? What are your impressions? What was your favourite? Please leave a comment!