Arriving in Aswan Egypt from Hurghada (and Cairo too) was like arriving in a completely different world (or maybe country to be less dramatic). Aswan Egypt is green and lush, amazingly beautiful with a lovely relaxing atmosphere.

Aswan was all paradise… Was it Eden?

My hotel in Aswan was located more or less on the boardwalk along the Nile, and it was so fancy. Even though the poorer neighbourhoods was just around the corner, my hotel seemed to be one of the better ones. There were lots of horses and carriages along the road just standing there waiting for tourists… 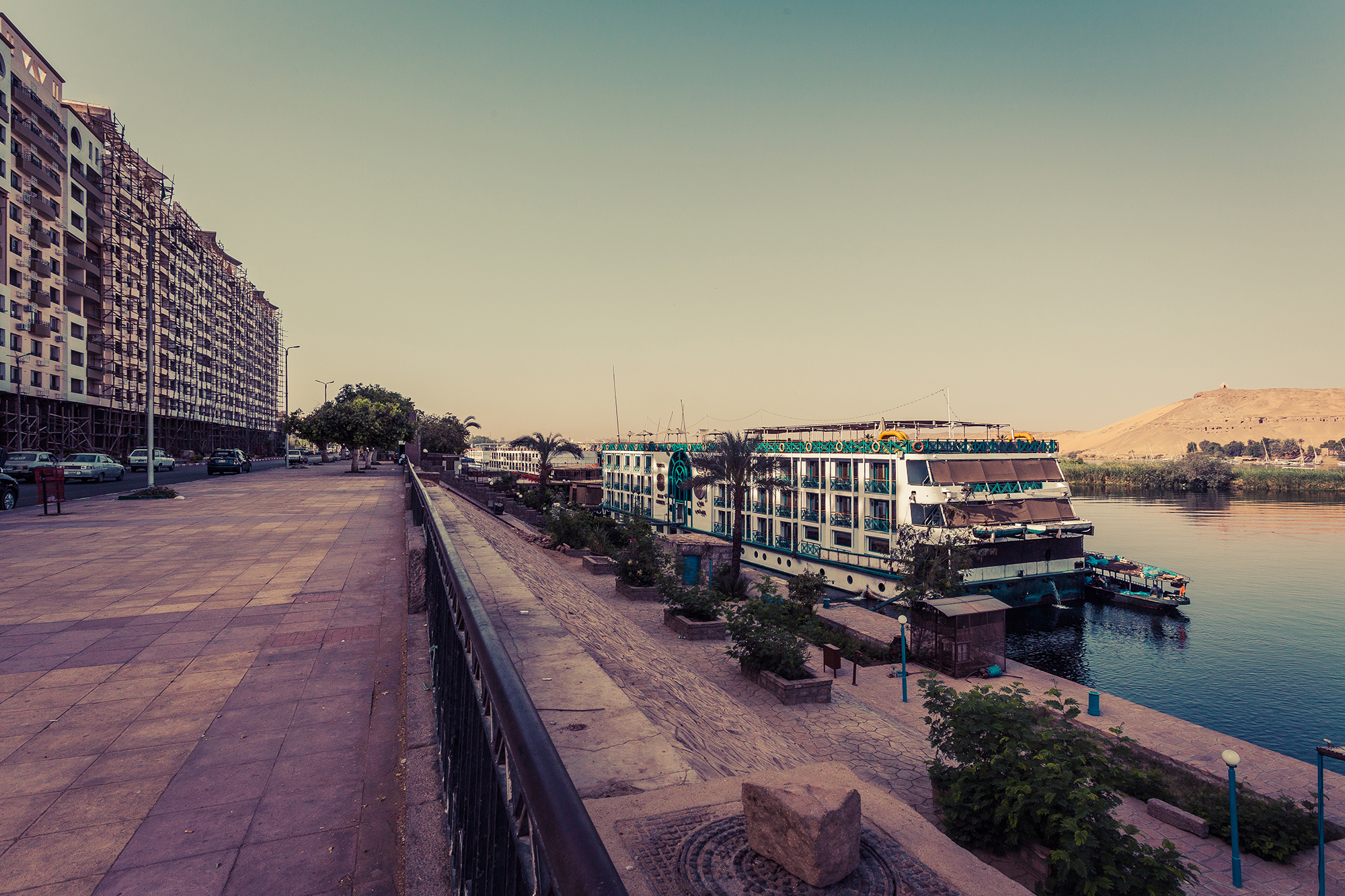 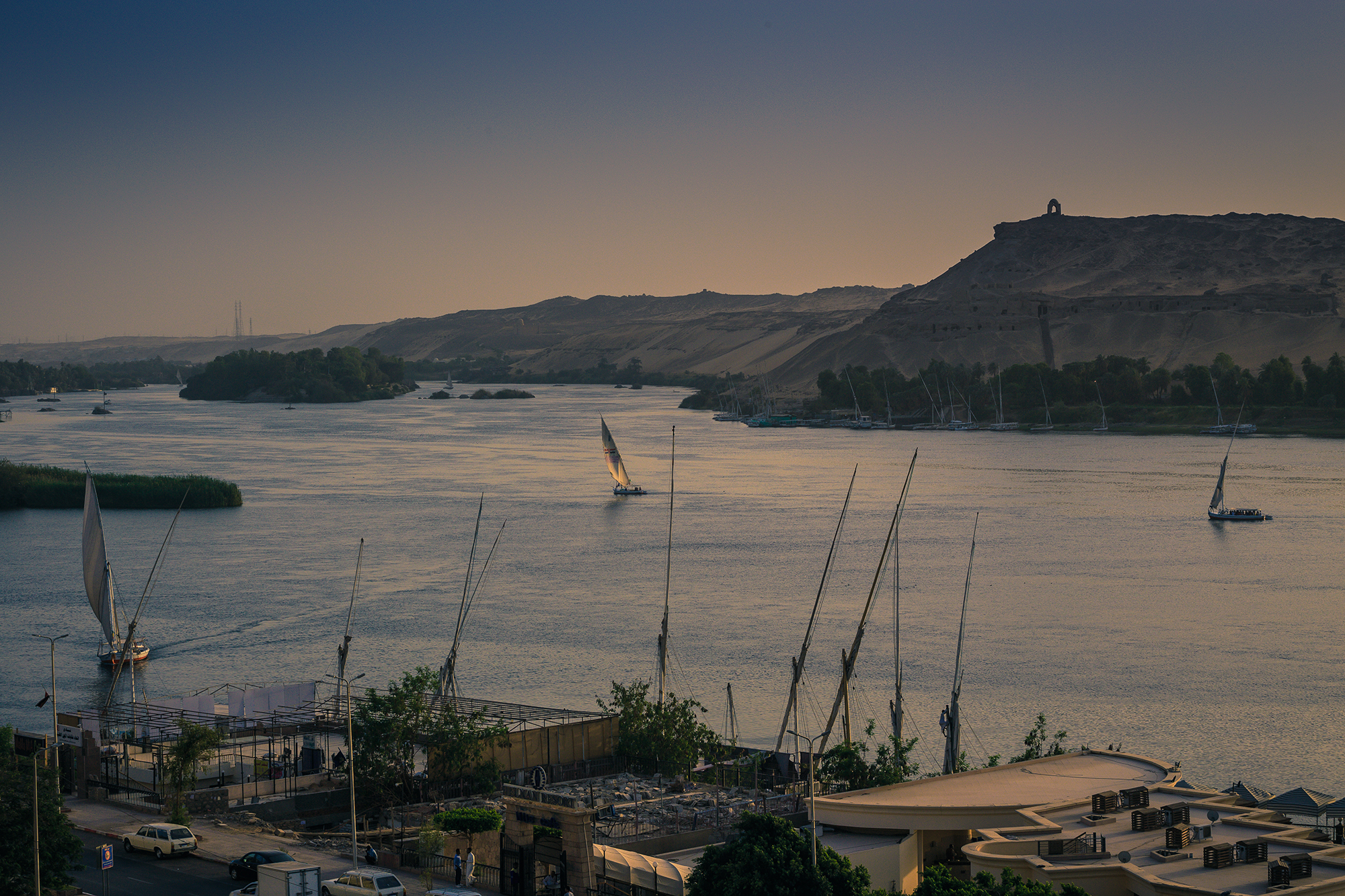 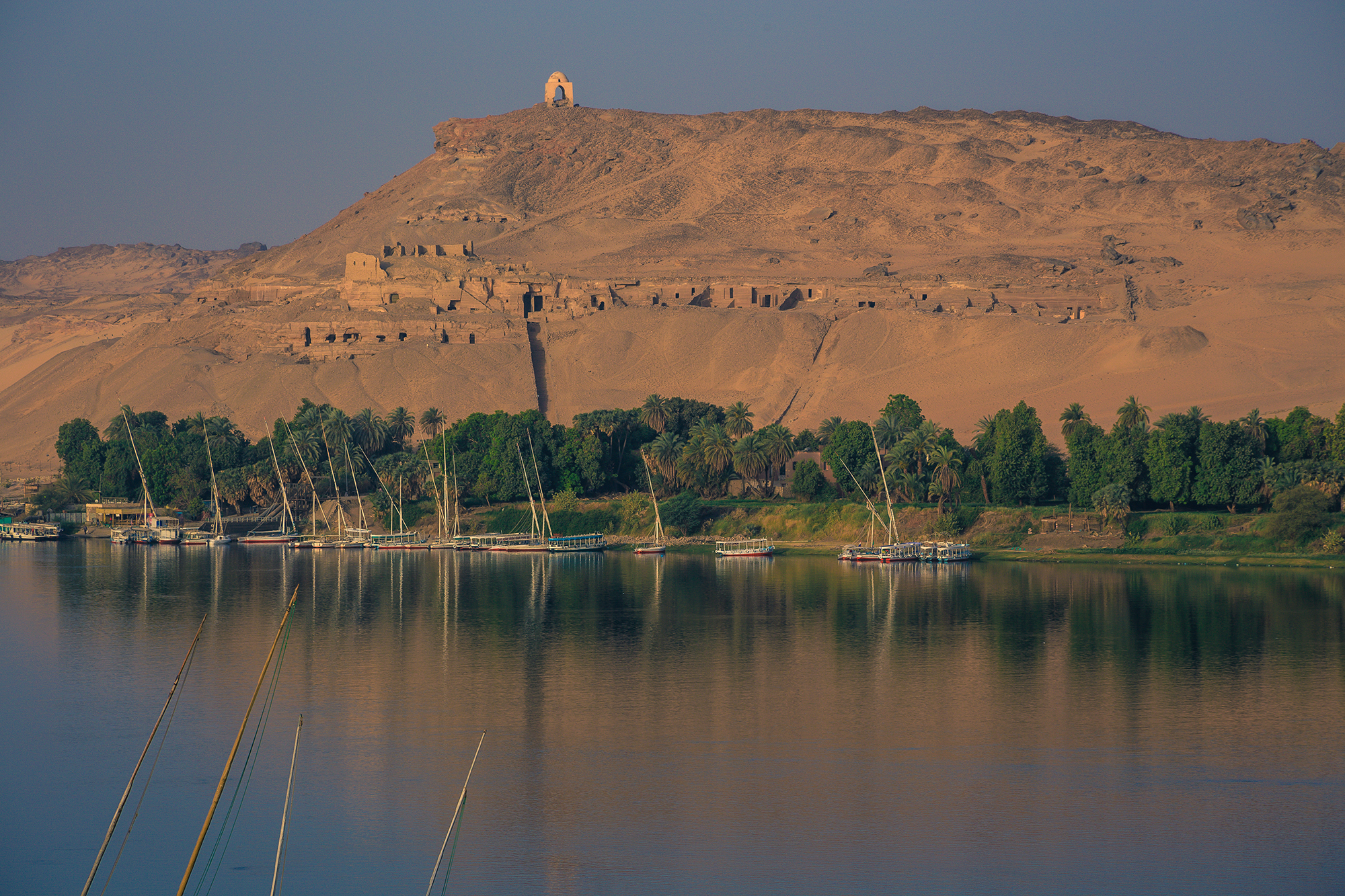 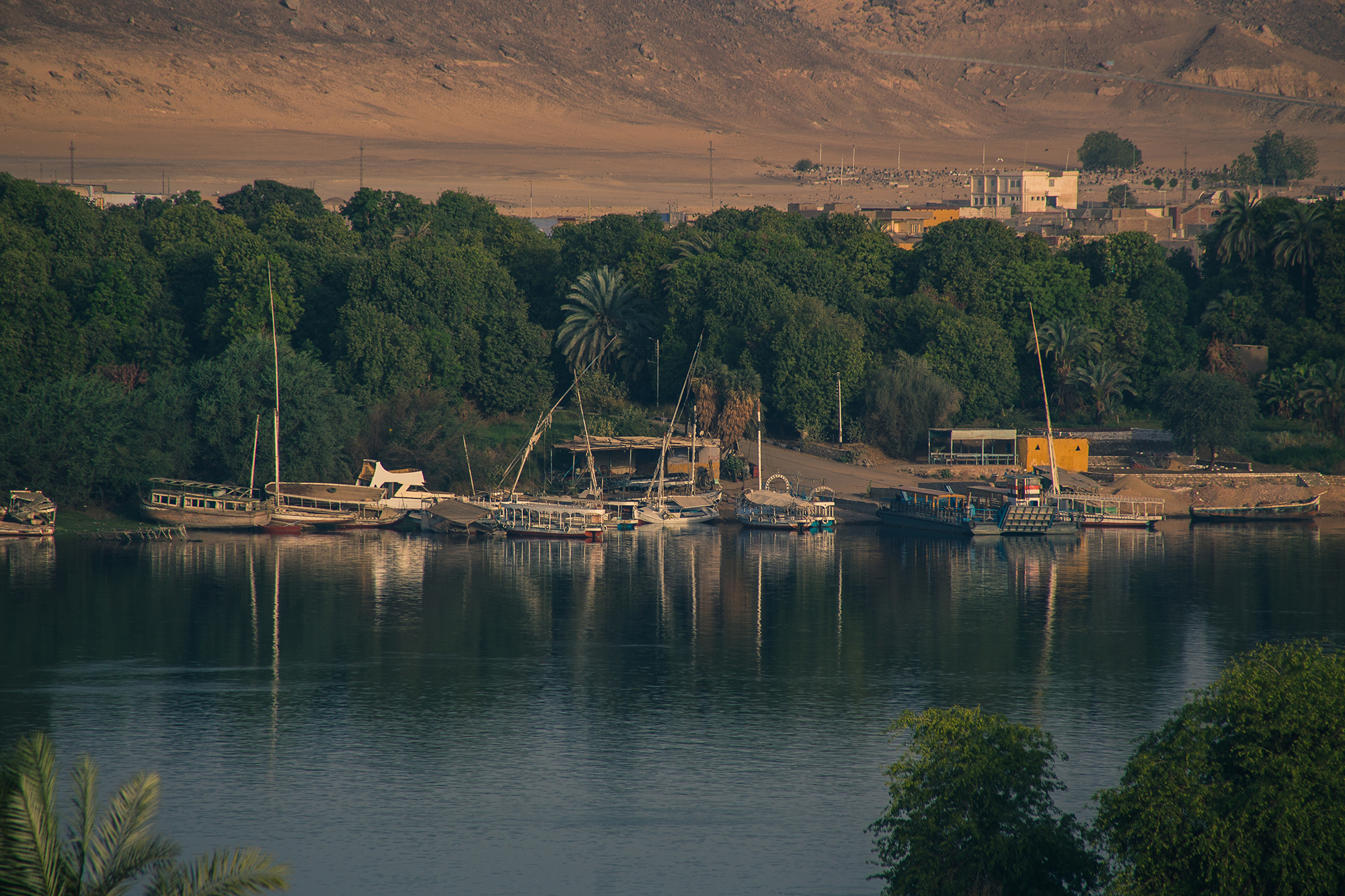 A guy in the reception in my hotel in Hurghada had helped me book a flight to Cairo along with a guide while there. For some weird reason I had forgotten all about how to book online, or maybe I just didn’t think it was possible for Egypt, so I turned to the receptionist. He had contacts, but he did feel kind of worried about helping me out, wishing I would rather turn to my tour guide.

Even so, he came through. And this guy was very professional and respectful, but the guy given the job arranging my flight and guide was somewhat creepy and started calling me without warning, and completely random. Fortunately, when we met and I was handed the ticket I only had one more day in Hurghada, so he never got the option of getting really creepy.

The flight price included a pick-up to/from the airport in Hurghada.

After they let me off at the airport I never saw him again.

The rest of my trip in Egypt I booked through Memphis Tours online. Excellent travel agency – I can really recommend them! They gave me a personal package which worked for me and my needs with great hotels, super professional guides, as well as new nice cars. With AC. Everything was so smooth! From beginning to end! Perfect!

The reason I went to Aswan was of course – Abu Simbel. Even though I’m crazy about ruins, some ruins are closer to my heart than others. Abu Simbel is one of the closer ones. Just like the Parthenon in Athens and Machu Picchu in Peru.

In the morning my guide picked me up for Abu Simbel at 08, but the engine decided to frack around, so it would be about 2 more hours before we were on our way.

On our way to Abu Simbel we stopped one time to have something to eat, but they didn’t have much to offer so I just had some potato crisps. 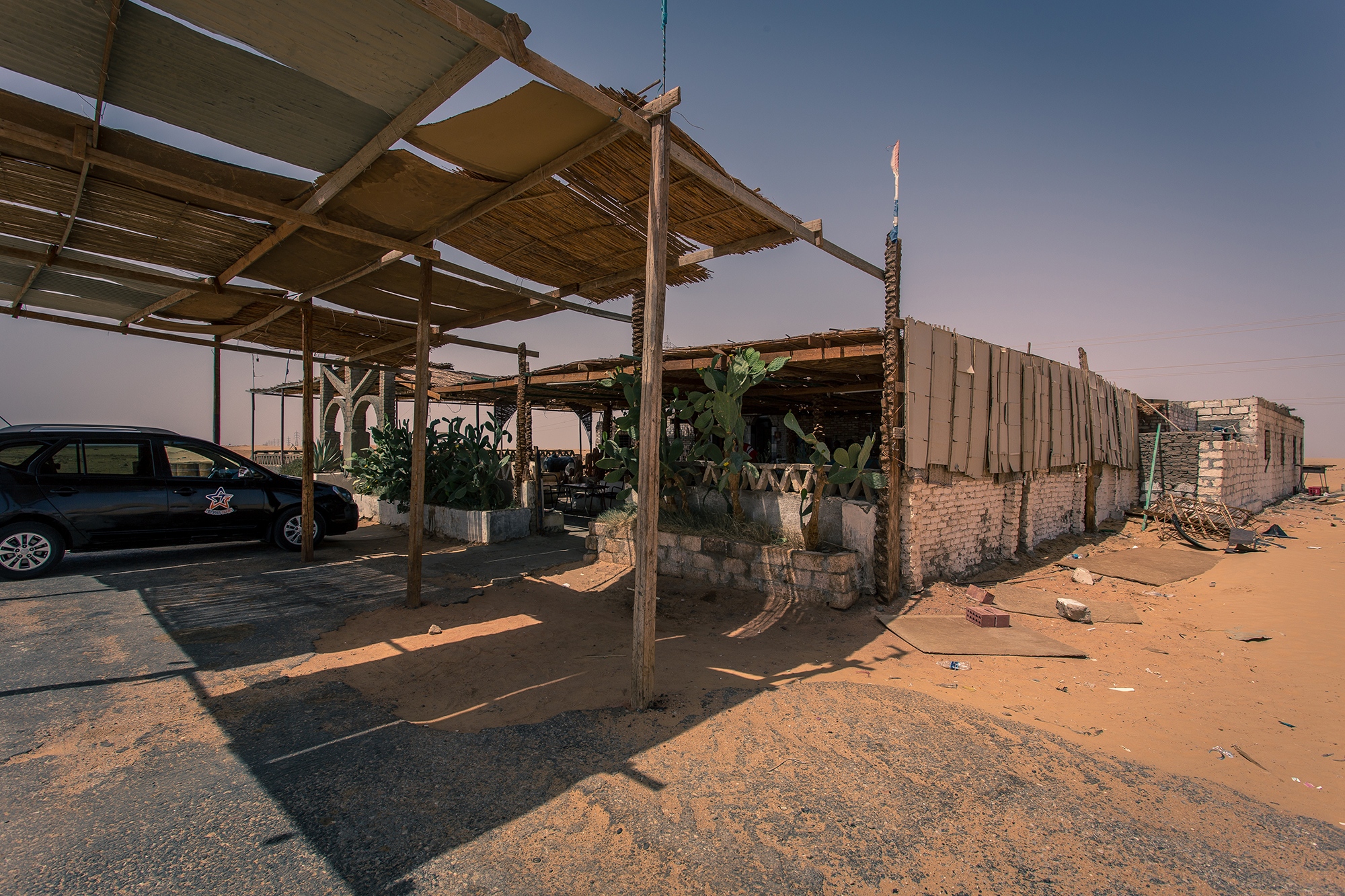 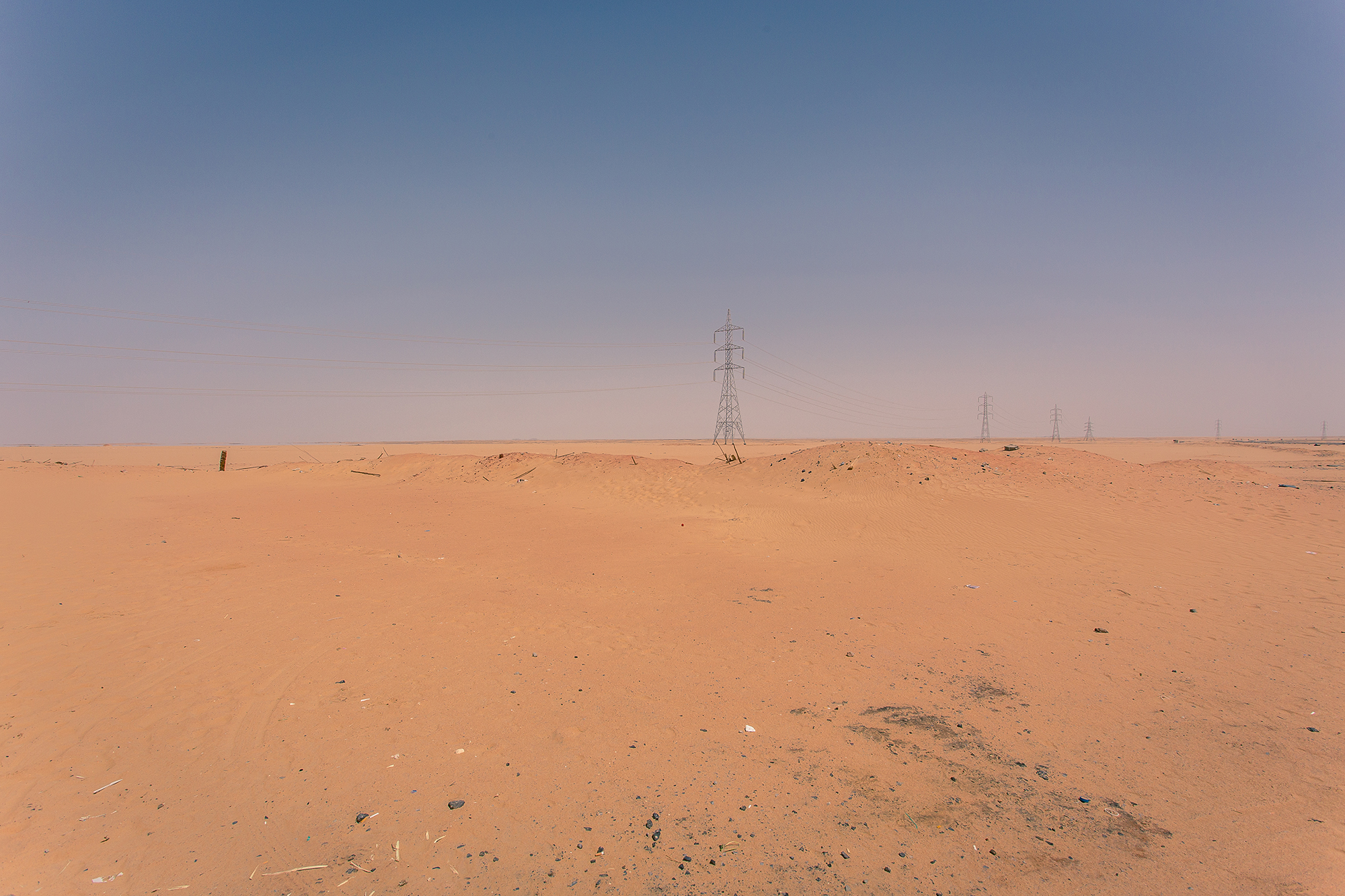 Arriving at Abu Simbel the guide told me plenty about the temple, all of which I won’t divulge here. They started building the temple in 1244 BC and it took about 20 years to finish. Totally crazy – that is some fast building! Abu Simbel is the temple of Ramses II; the same Ramses II I was completely fascinated by when I was younger reading the books by Christian Jacq.

Something truly interesting is that the whole temple was actually moved between 1964-1968, due to the construction of the Assuan dam. That is simply insane! 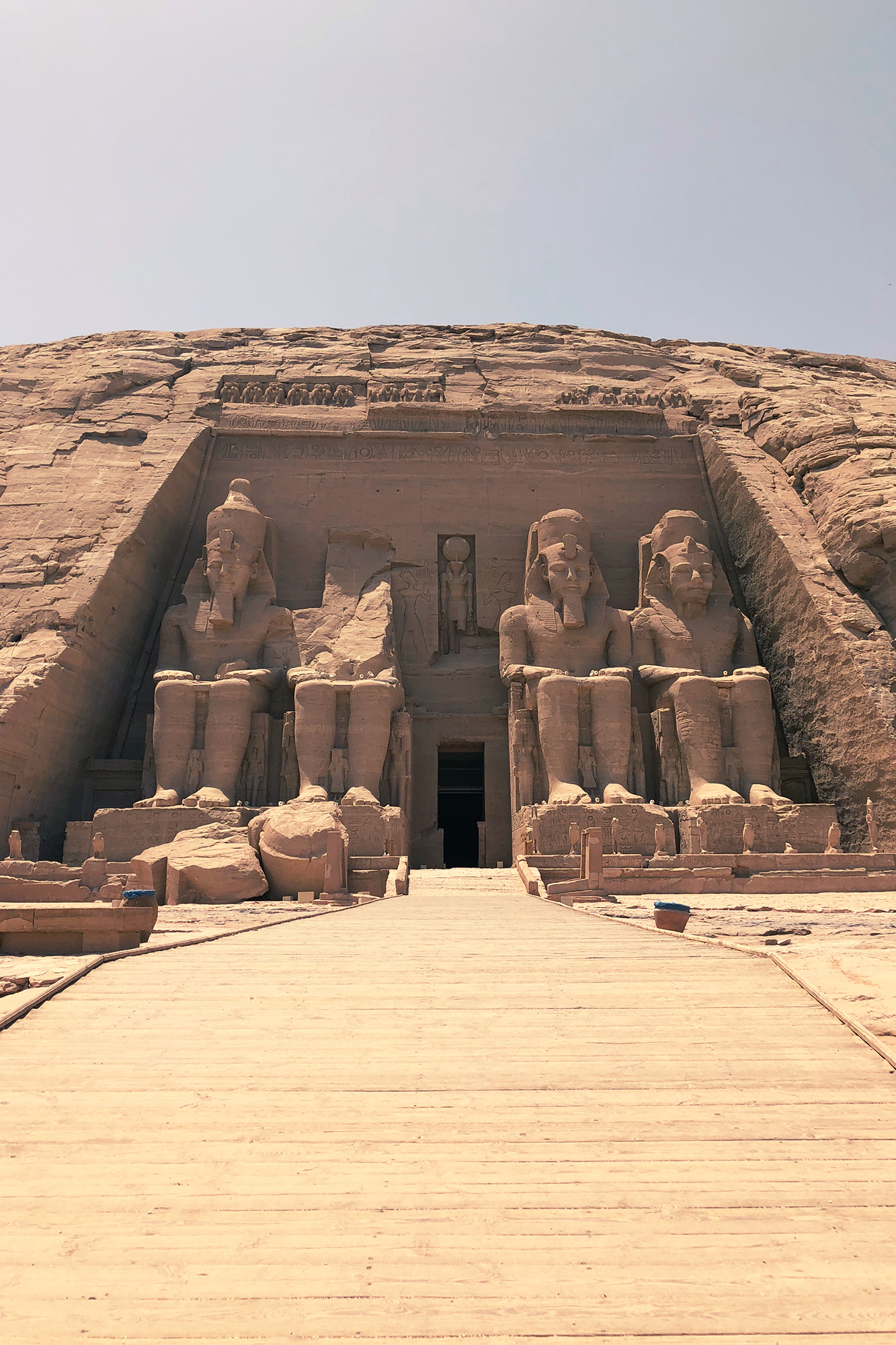 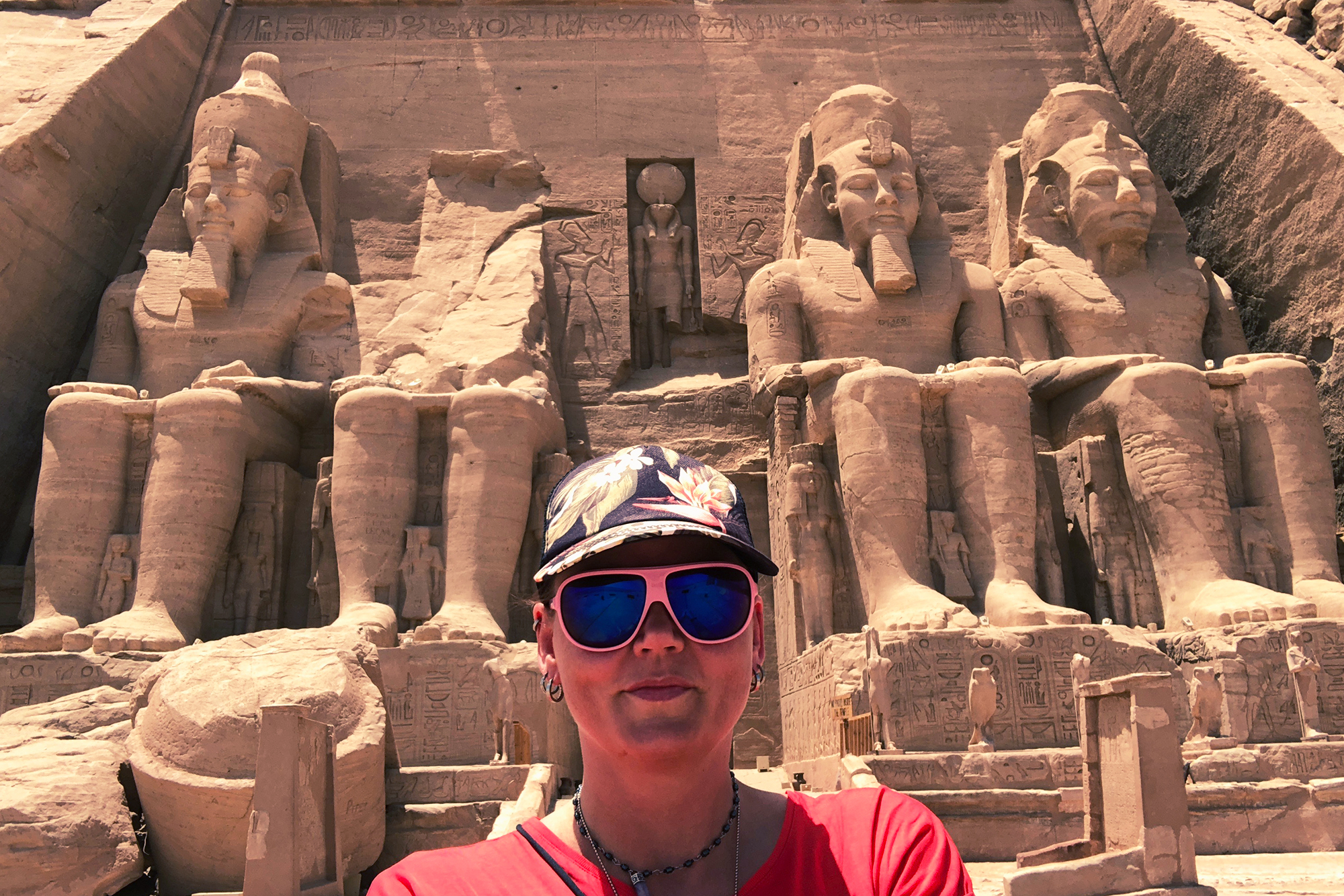 After the guide had told me about Abu Simbel he helped me out – taking some stiff awkward photos, suggesting poses for me… You know, such activities that I love… or not… Something I’m very skeptical about and the reason I rarely use guides is that I’m worried they won’t give me enough space. I enjoy walking around among ruins, or wherever I am, pondering what life was like back in the day, thinking about how many people have been walking around there before me. I want to touch the stones, feel their energy. I don’t want to be disturbed by someone yapping in my ear all the time…

But this was not the case in Egypt – I had a lot of time on my own. Perfect mix! 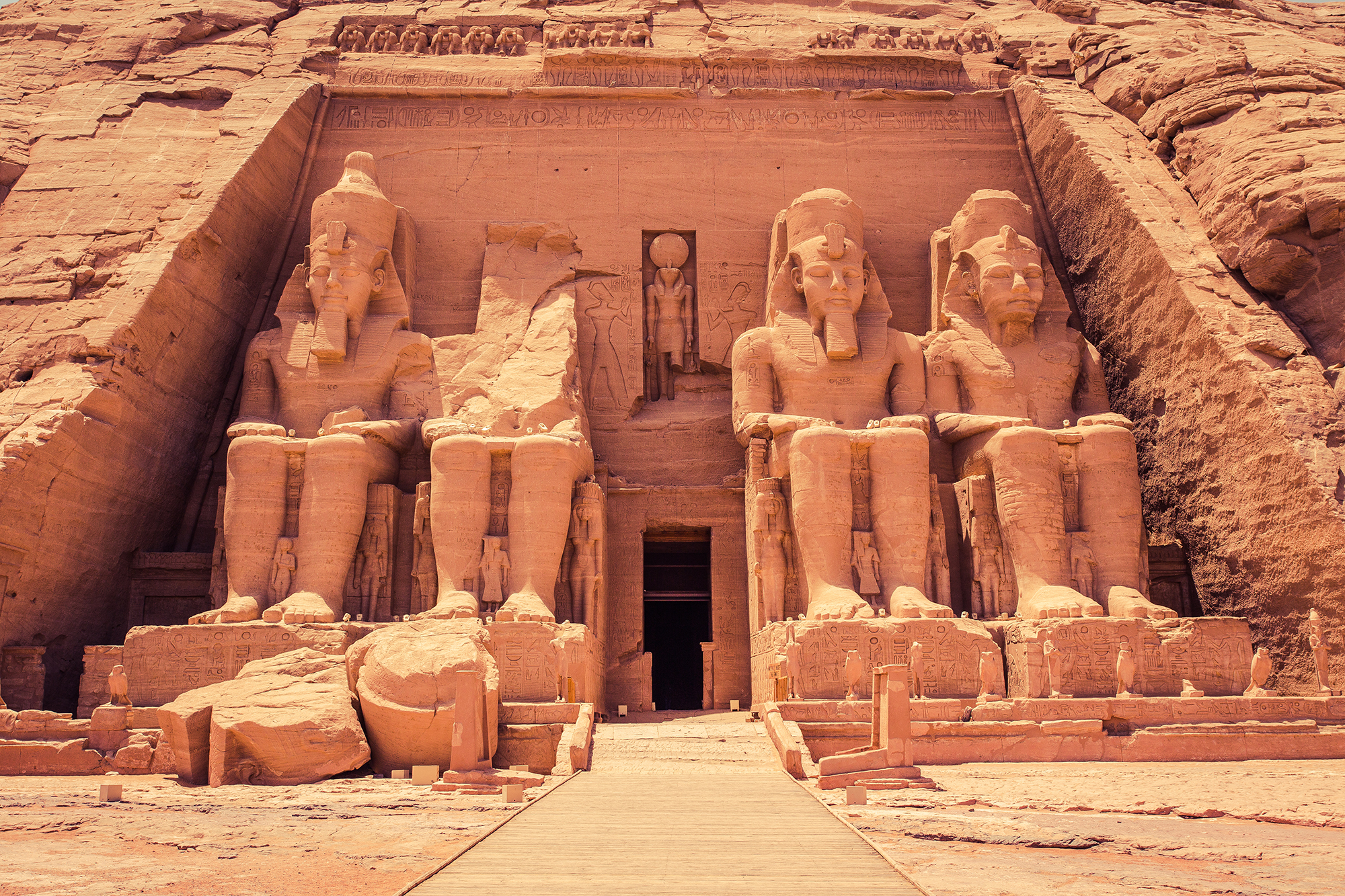 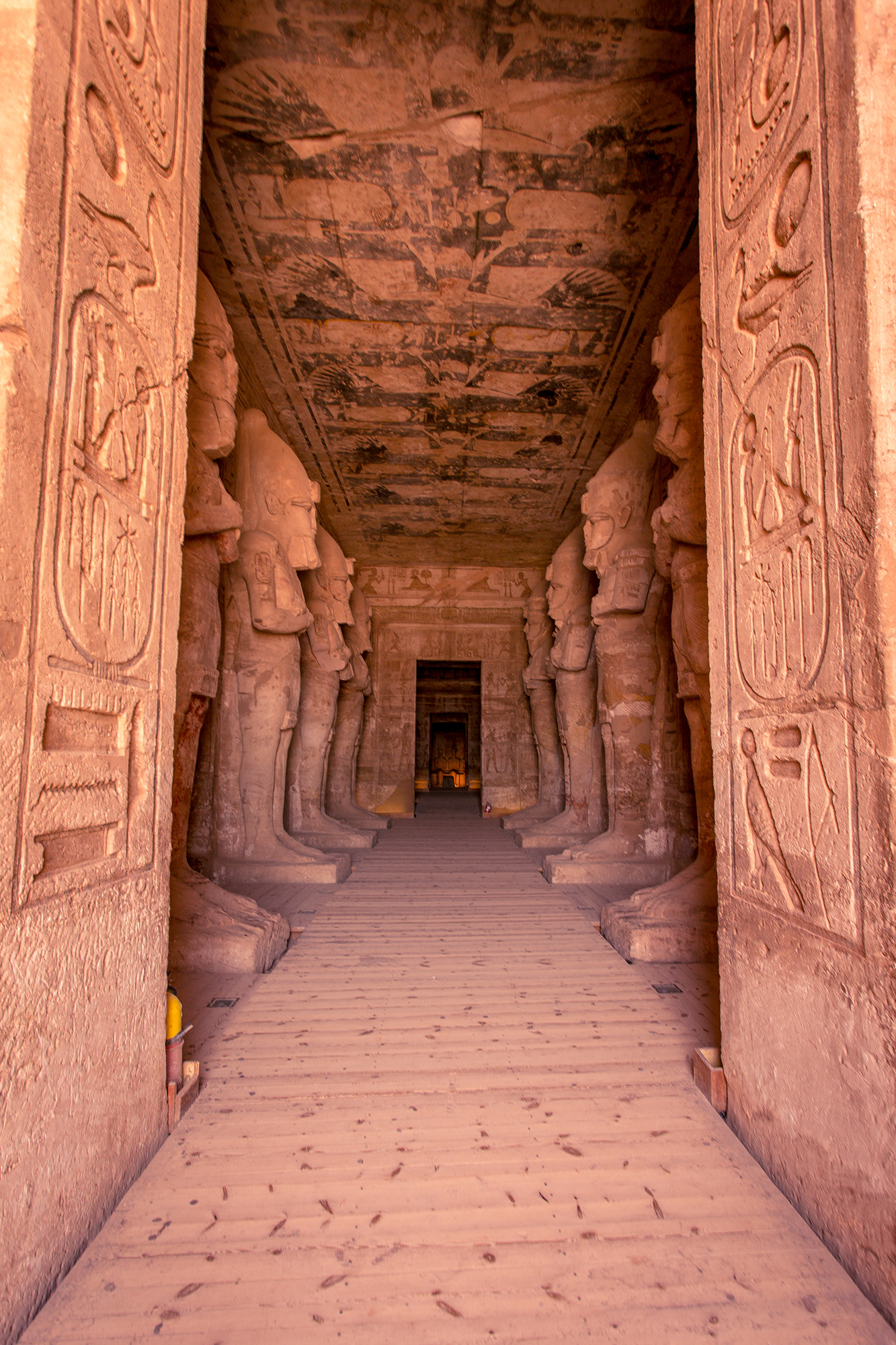 While wandering about around the large temple the guard noticed me and felt an urge to help me out with some photos. So he handed me the key to the temple, a very large key in the shape of an ankh, and we took some photos.

So this guard too felt I was being slightly awkward, so he suggested some different poses as well! 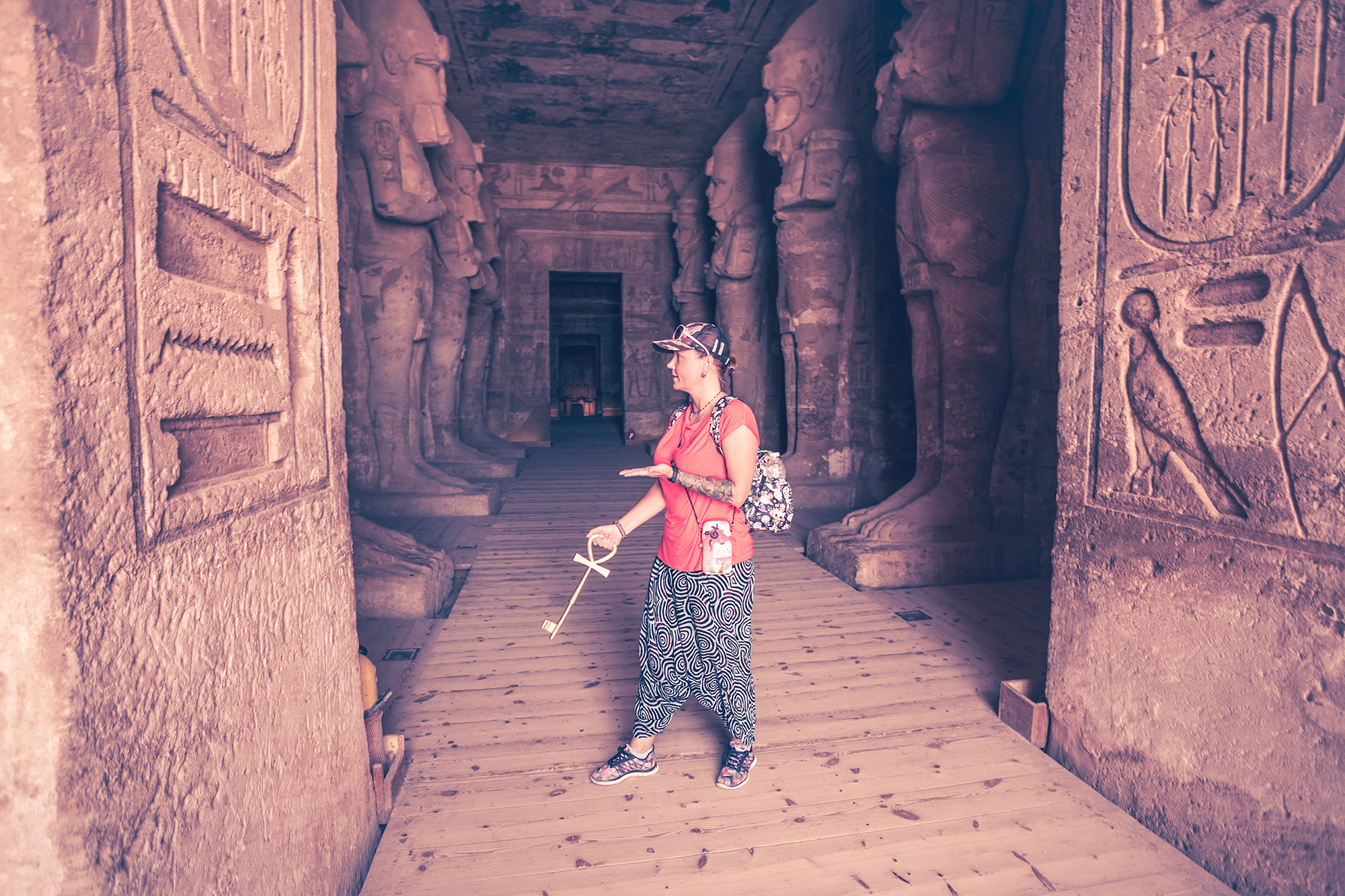 My only problem at Abu Simbel was that I only had a hat for protection against the sun. I should’ve brought an umbrella, or something similar. I only carried a small bottle of water too. It was in the middle of the desert and it was 49 degrees Celsius! 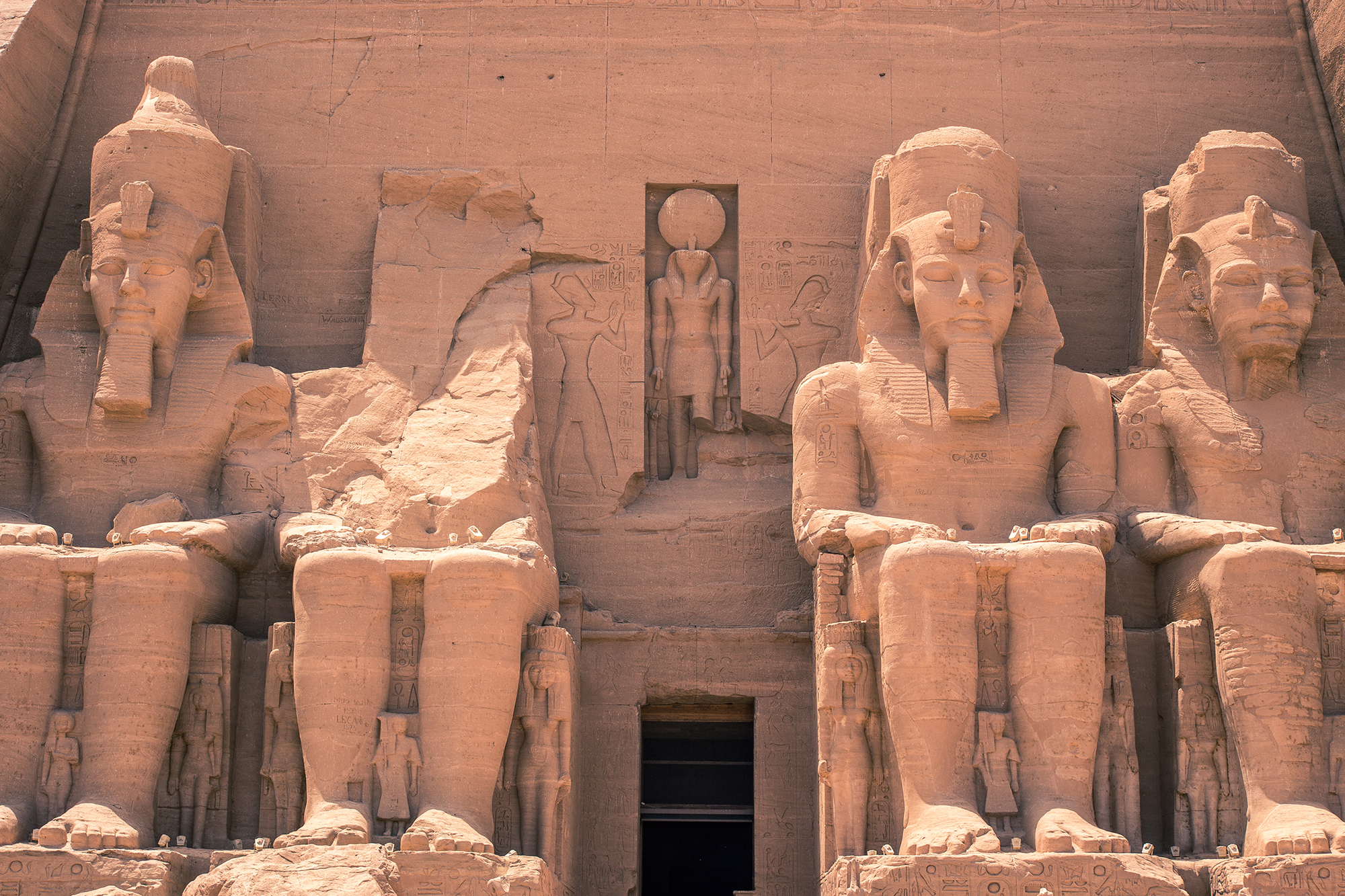 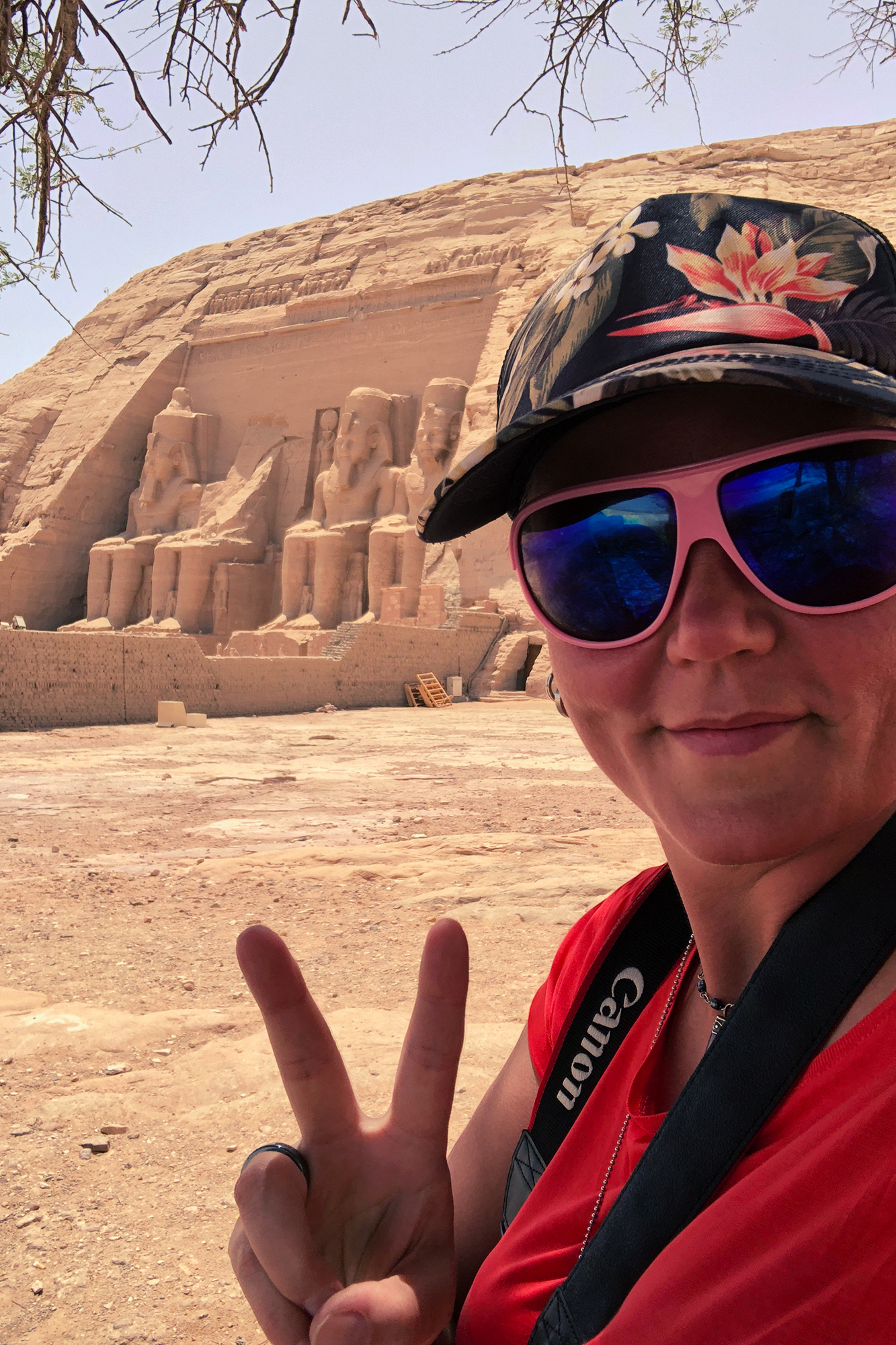 So, needless to say, I fell pretty ill here – heatstroke. For the second time in my life. It even got slightly tricky for me getting back to the car. That was how bad it got. I had to really pull myself together, and eventually, I reached my destination. The guide was chilling at a café in the shade – perfectly happy.

My reward for not drinking enough water was a humongous migraine! Of course! 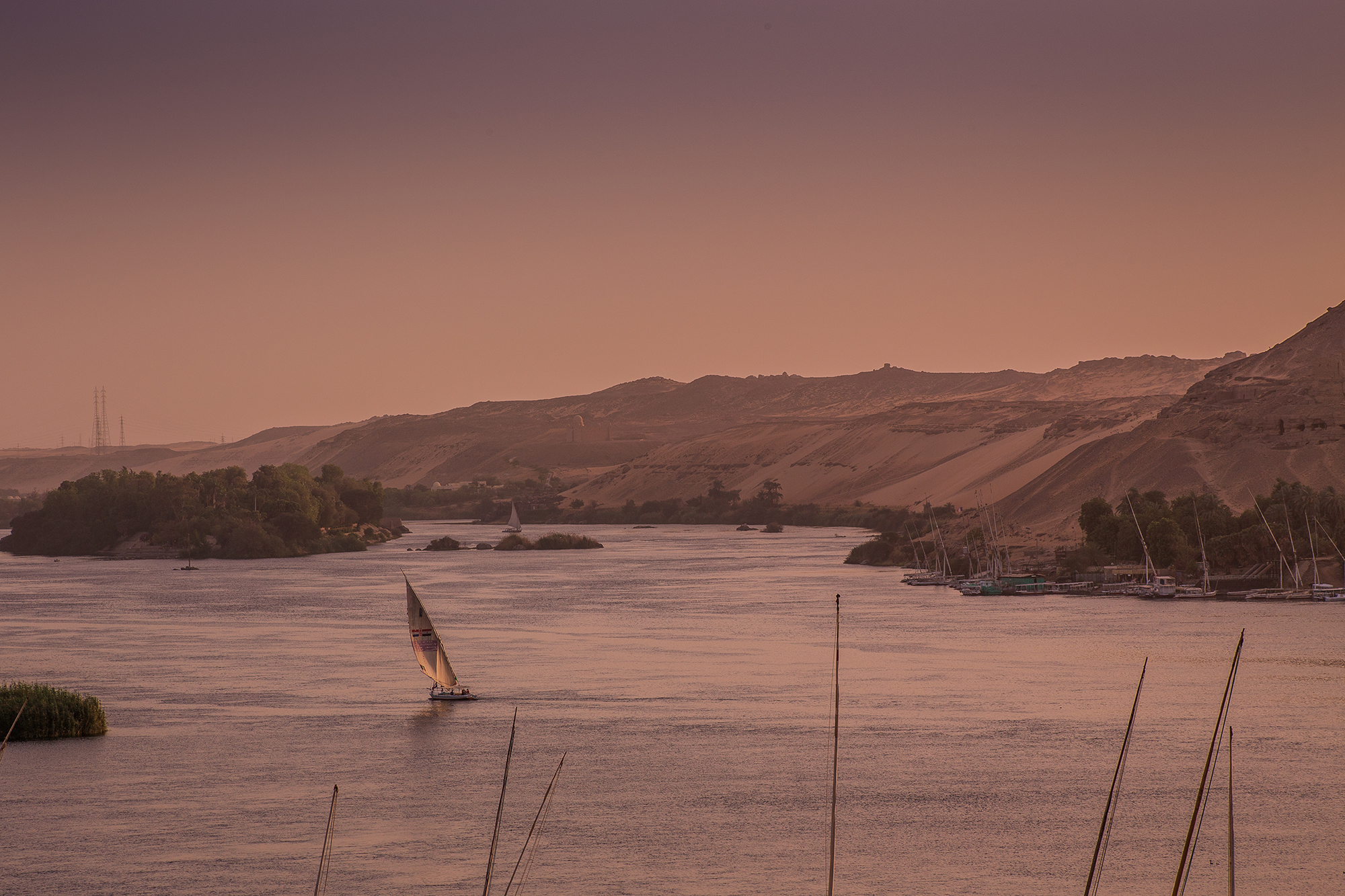 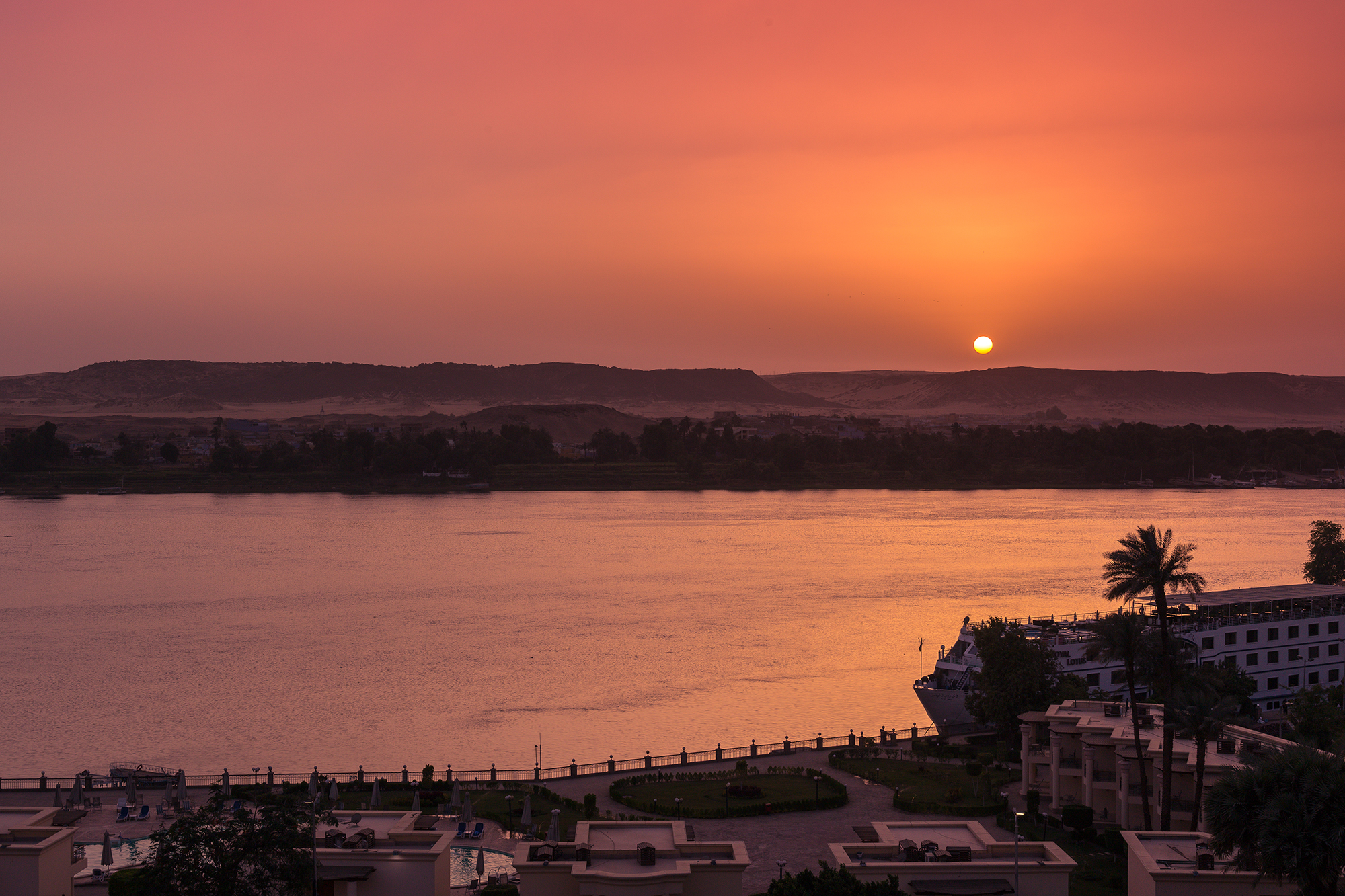 Another night in Aswan Egypt and quite late when my migraine wasn’t killing me anymore, I took a stroll along the boardwalk, looking around. There were plenty of horses and carriages along the boardwalk and it was rough to see how thin and malnourished the horses were. At the same time I saw the men, sitting there in their dirty, ragged tunics.

Each and everyone is of course entitled to their own opinion here. Just like with everything else. I feel I need to chose empathy for the human beings living in misery, even if my heart and my empathy is bleeding for the animals who end up hurting. 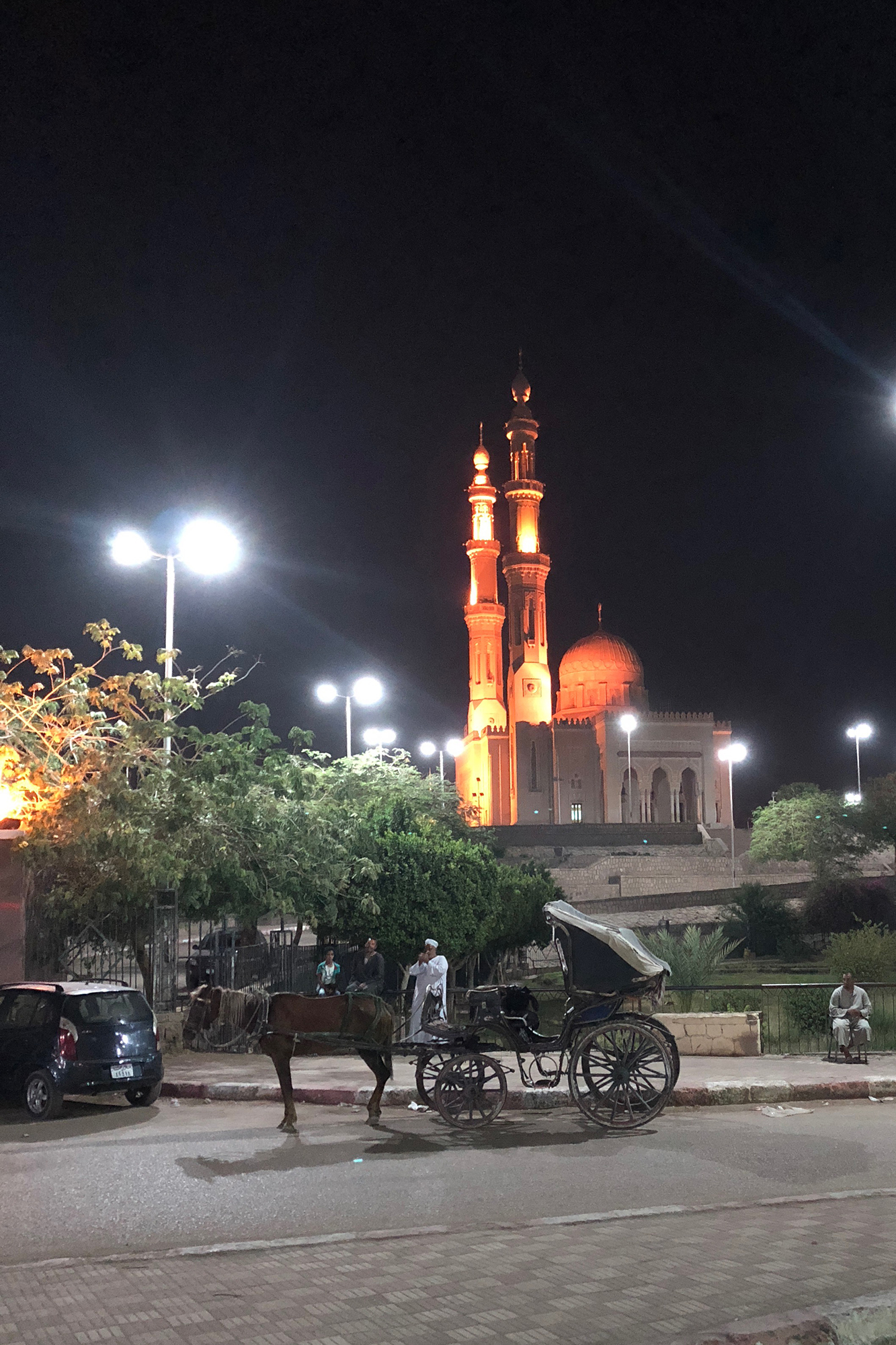 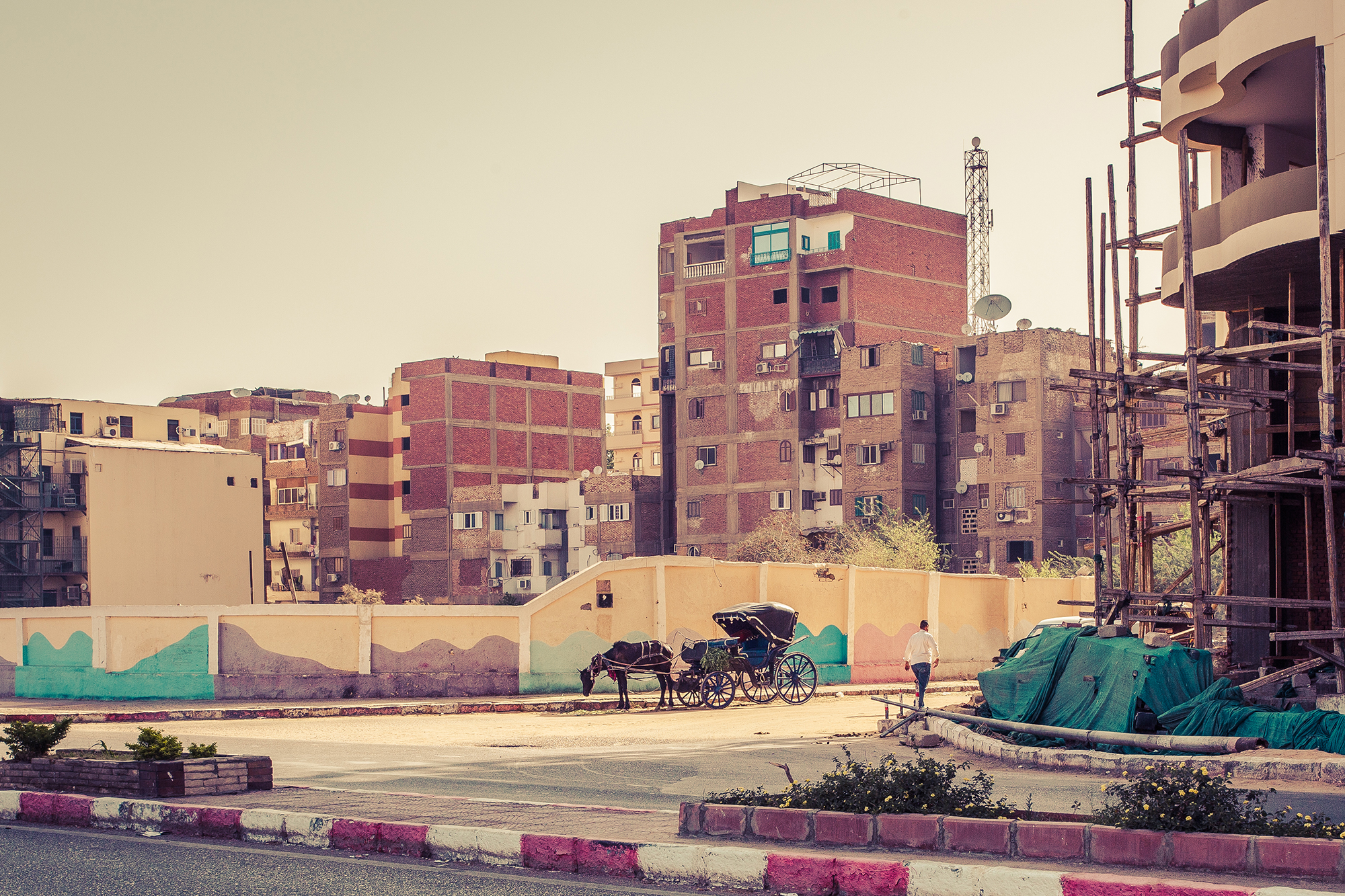 What right do I have to judge someone for simply wanting to support their family? Me, coming from a privileged life and country.

If it only were that easy to demand people step up and stop using animals. I wish we were living in a utopia where no animals ever need to suffer, no humans need to suffer, but we’re not there just yet. Unfortunately. With that said I’m really not saying this is not something worth fighting for. I however believe we need to use other methods for these countries than we can use here back home!

Before I was moving ahead with my flashy car to Luxor we visited Temple of Isis, which also had been moved due to the building of the Assuan dam. The temple used to stand on the island of Philae, but today it stands on the island of Agilkia. 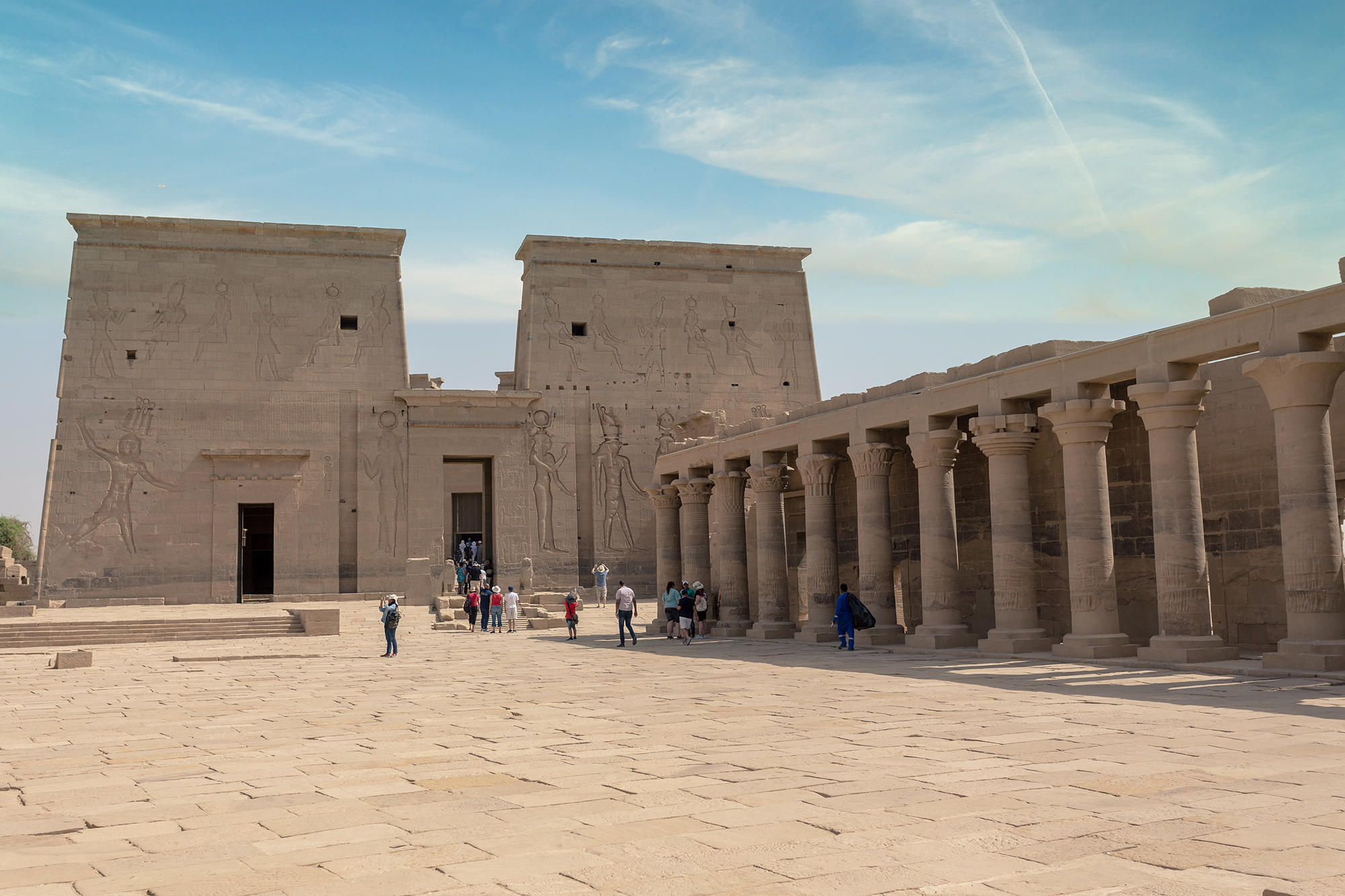 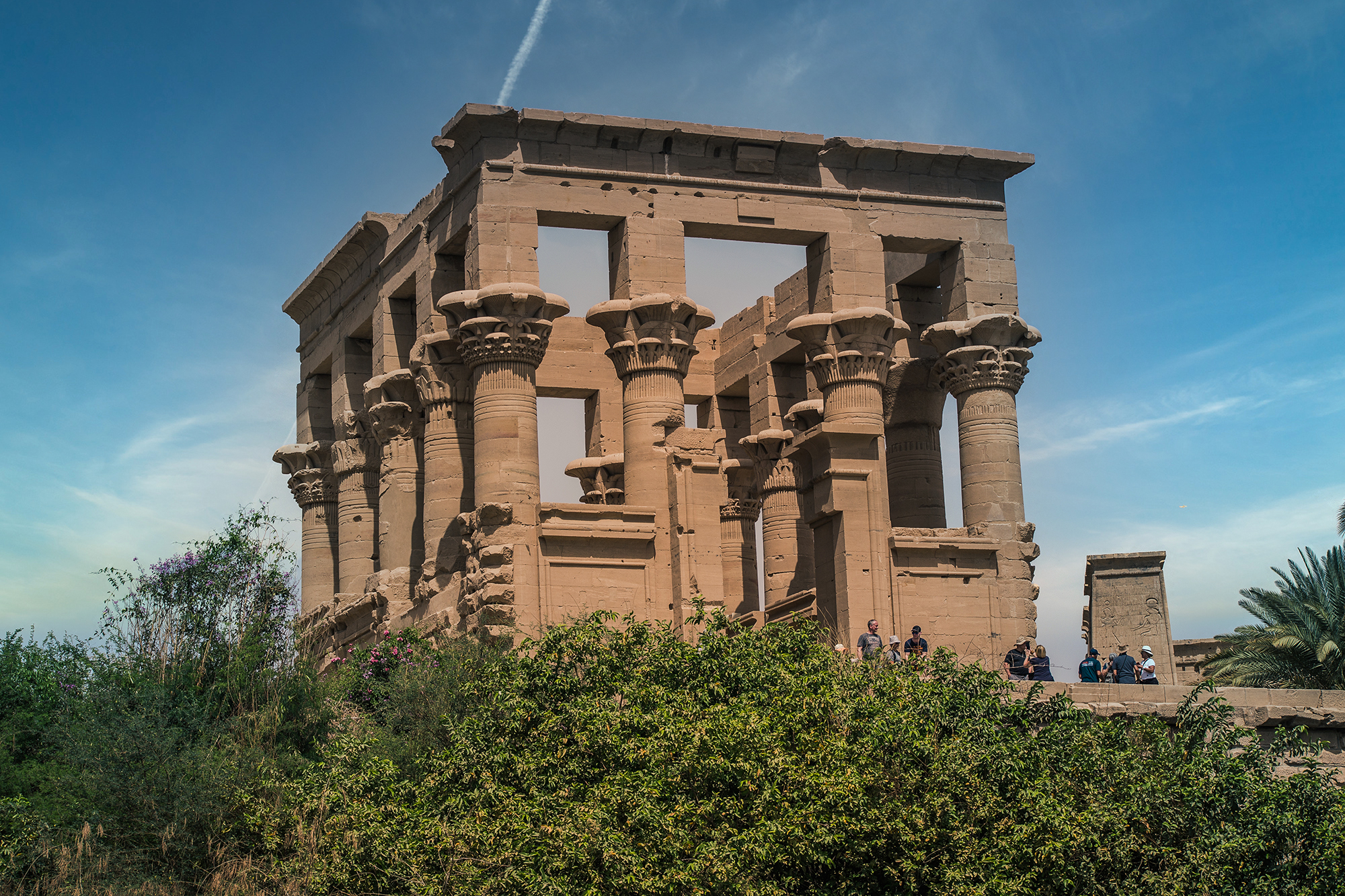 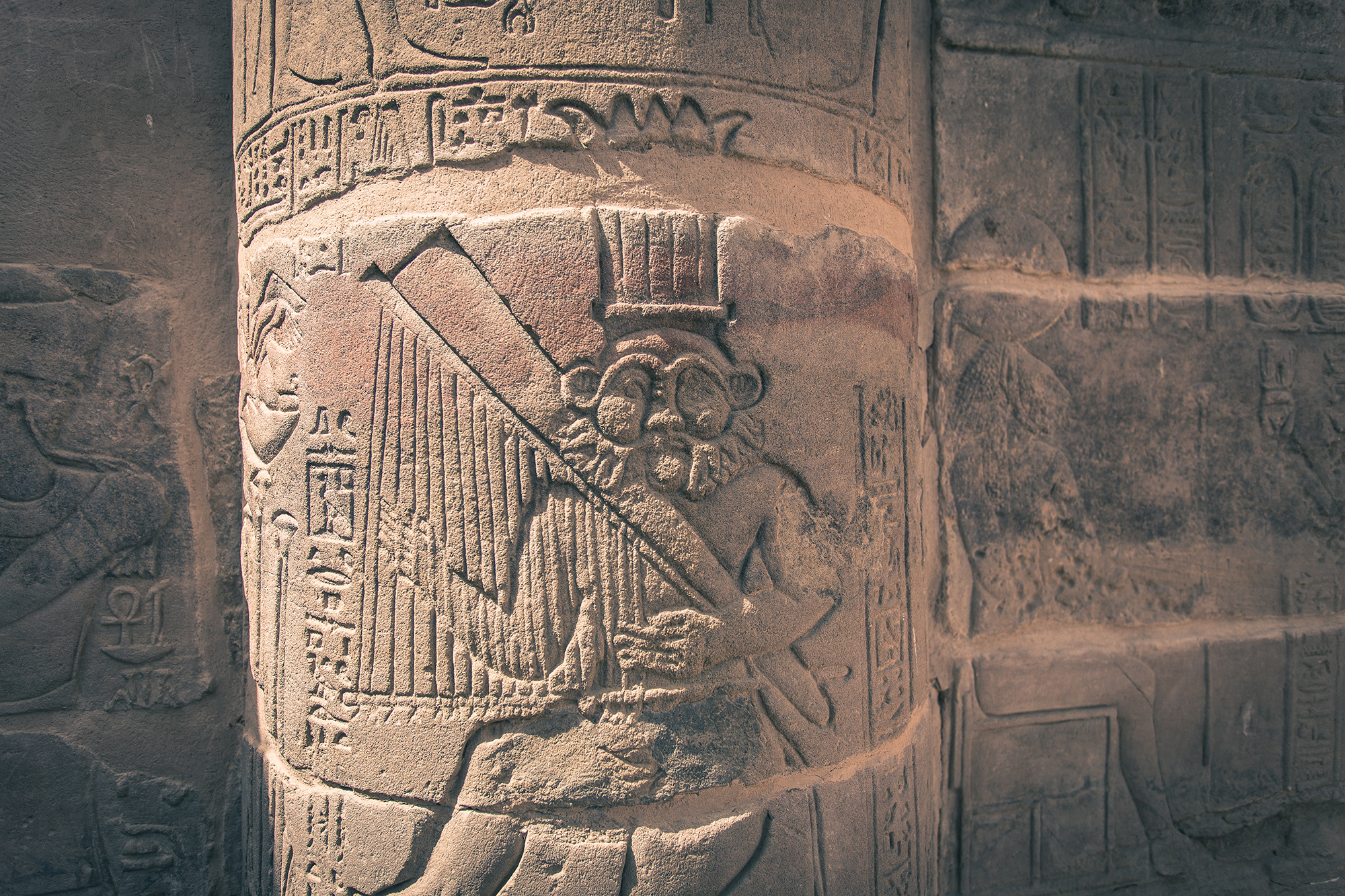 Before we moved on to Luxor, we checked out the obelisk and Aswan dam.

Have you been to Aswan? Abu Simbel? Please leave a comment!