Cancún did not really interest me. If I’m to be completely honest I was really disappointed even on the first evening when the taxi took me to my hotel. What I saw through the windows was just a pure tourist frenzy. So no, I was not impressed.

If I’m to be even more honest I don’t even know why I at first thought Cancún would be for me!

I had been looking for some really nice hotel to chill, just laying by the pool. I can’t deny this is what I got, so Cancún did do what I had set out for…

The Maya ruins El Rey is just smack in the middle of the tourist area of Zona Hotelera, and it didn’t take me many days to find my way there. I took the bus, which is pumping out crazy loud music, and flies through Cancún like a bullet!

Something positive about Cancún’s Zona Hotelera is the 24/7 buses for only 12 pesos.

This is as cheap as it gets (apart from the rest of the Mexico I have seen!). Jumping off the bus I passed by some bushes and saw a pretty large iguana. He was just there on the ground, chilling and enjoying the solitude and quietness (!). Maybe a fellow introvert like me. Next to Zona Hotelera’s incredibly heavy trafficked road. He just didn’t seem to mind. 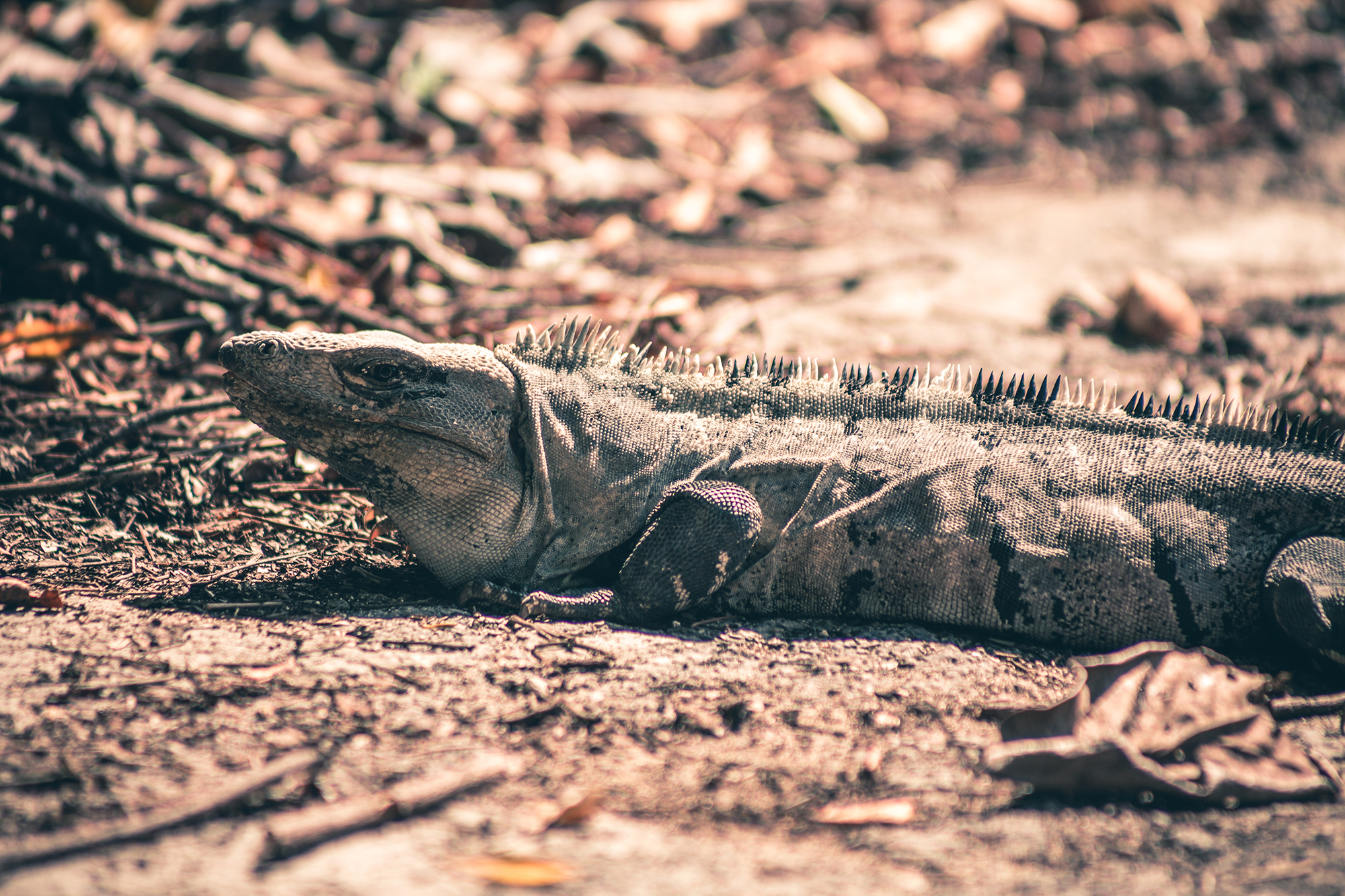 Already on my first day out walking in Cancún, I had actually met an iguana in the middle of the sidewalk. For some strange reason, I had not taken a photo! What was I thinking? Even though my camera was with me… But I wasn’t about to make that same mistake again.

Well, it’s not every day you get to see an iguana in the wild, or so I thought! 🙂

No, maybe not in Sweden… Anyway, I walked on towards the Mayan ruins El Rey, which was my goal. When I had paid the entrance fee a man introduced himself. It turned out he was a guide, and he told me a lot of interesting facts about the Mayans and the ruins El Rey.

Sadly I turned down his offer of a guide. Usually, I don’t hire guides, and it’s not because I don’t feel it wouldn’t be interesting, nor that I’m too cheap… It’s because I enjoy discovering places on my own and I can’t really relax having someone with me. It’s probably that introvert-thing I suppose…

There was something about this man, however, which made me feel so guilty for not hiring him! Such an old kind man and he was standing here day in day out (in this hysterical heat!). Every day offering his knowledge to ungrateful tourists for no money at all, and most of them are probably too cheap to pay him.

It pained me, but I said no. 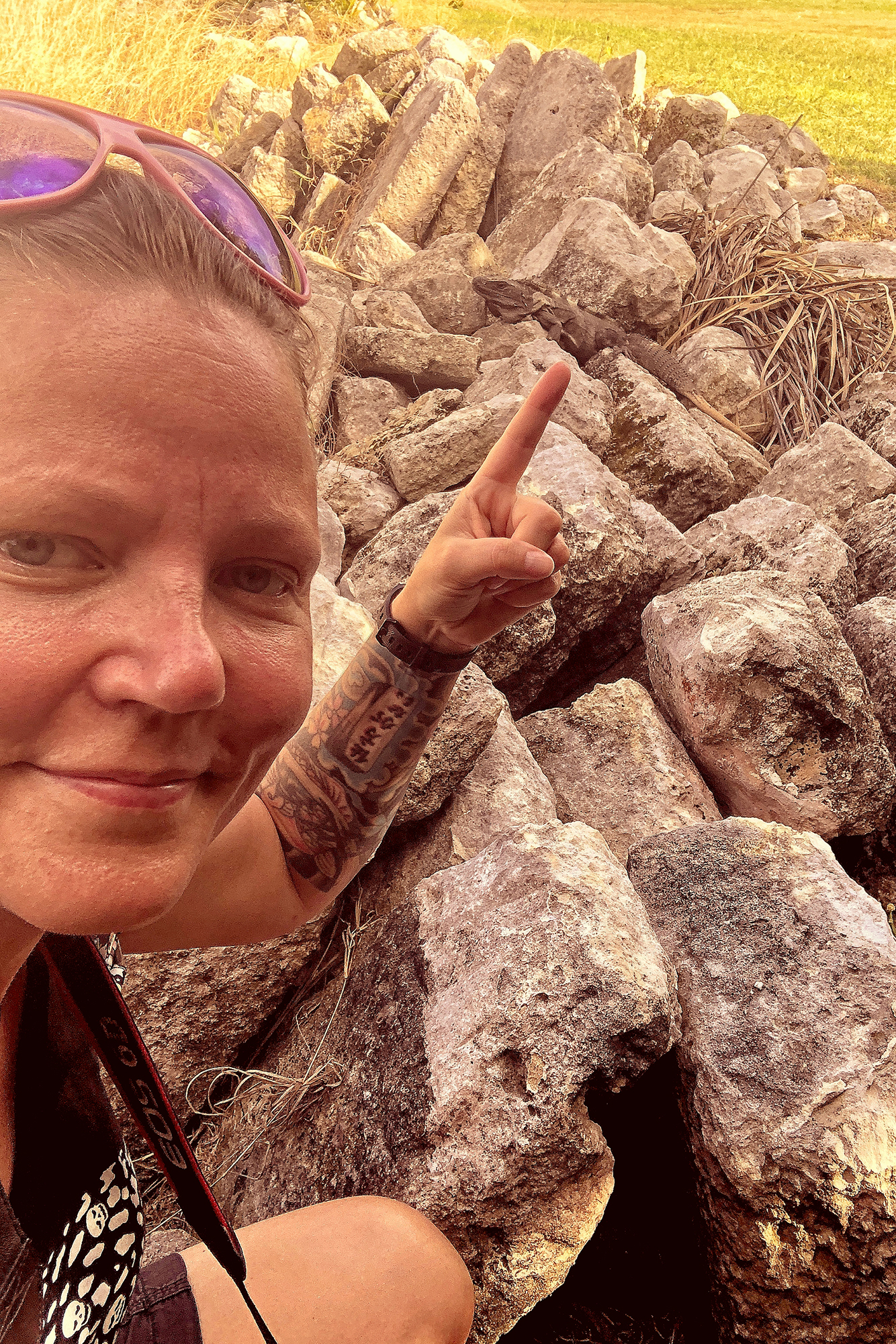 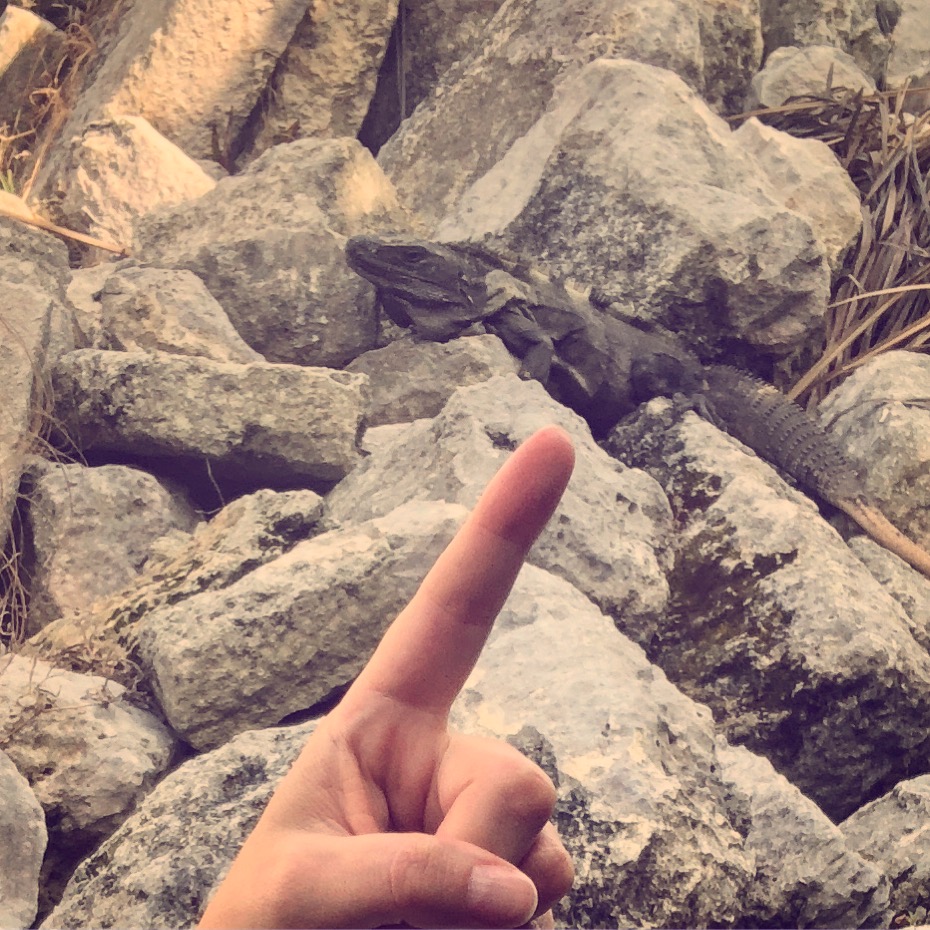 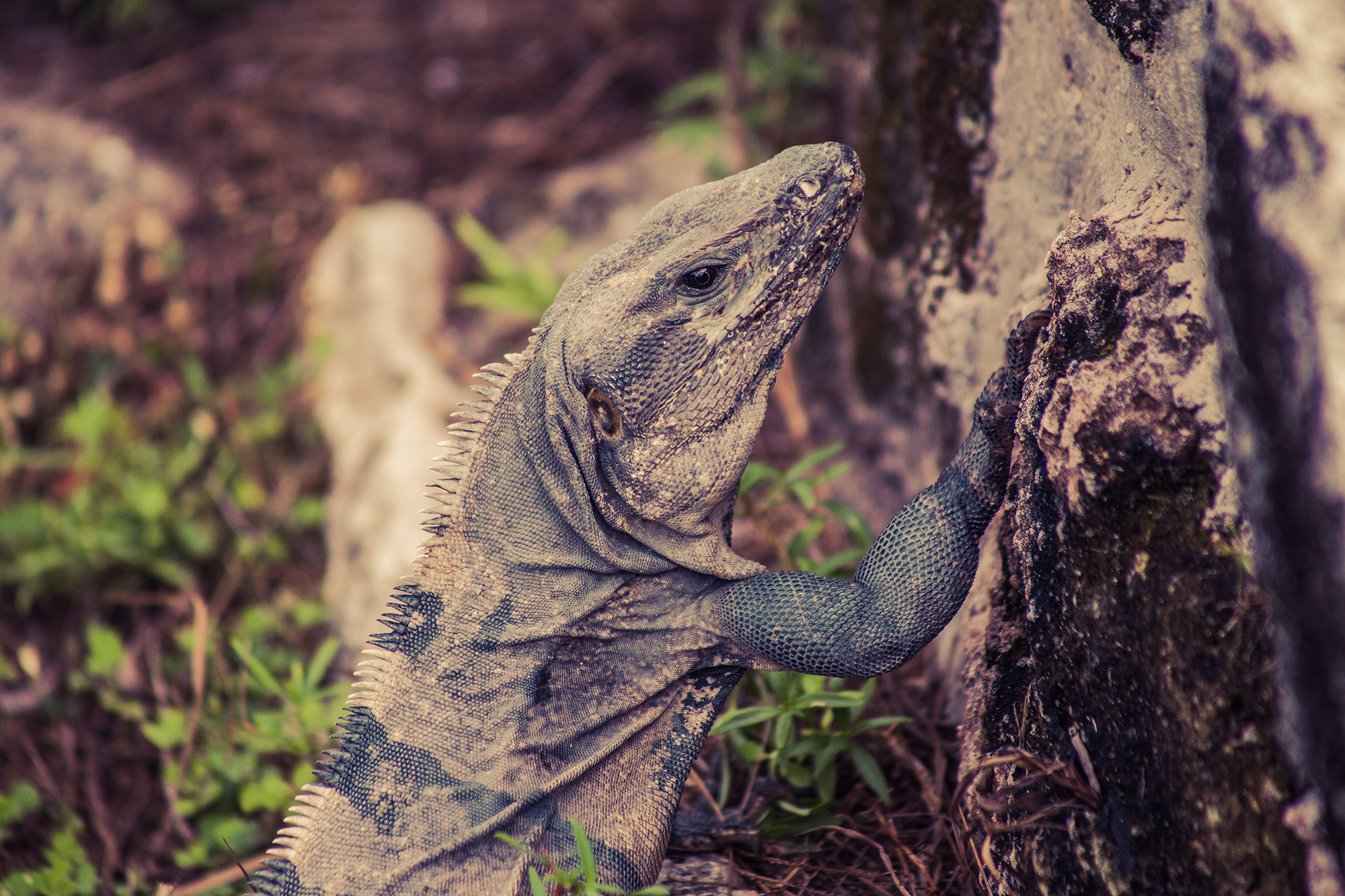 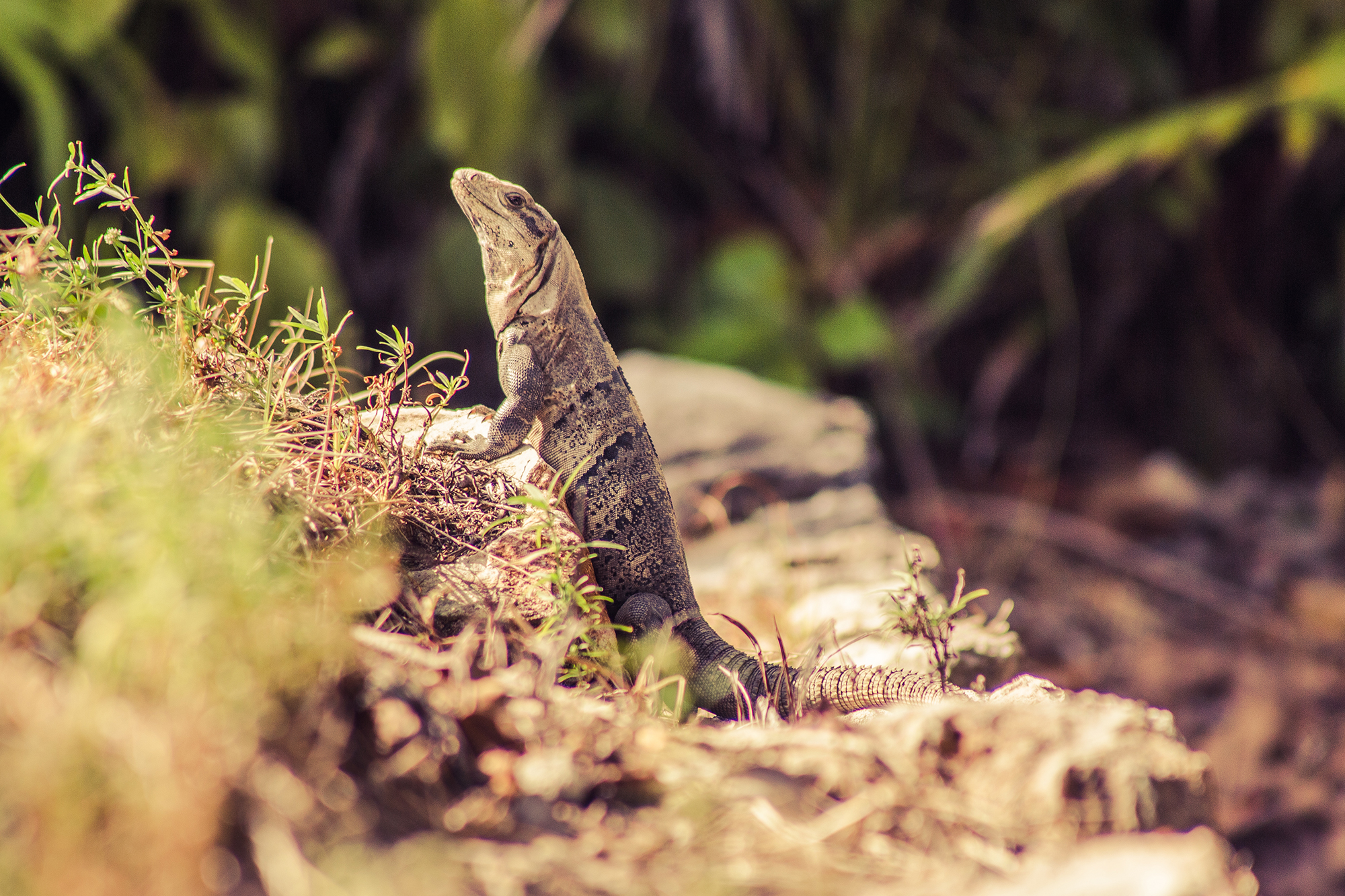 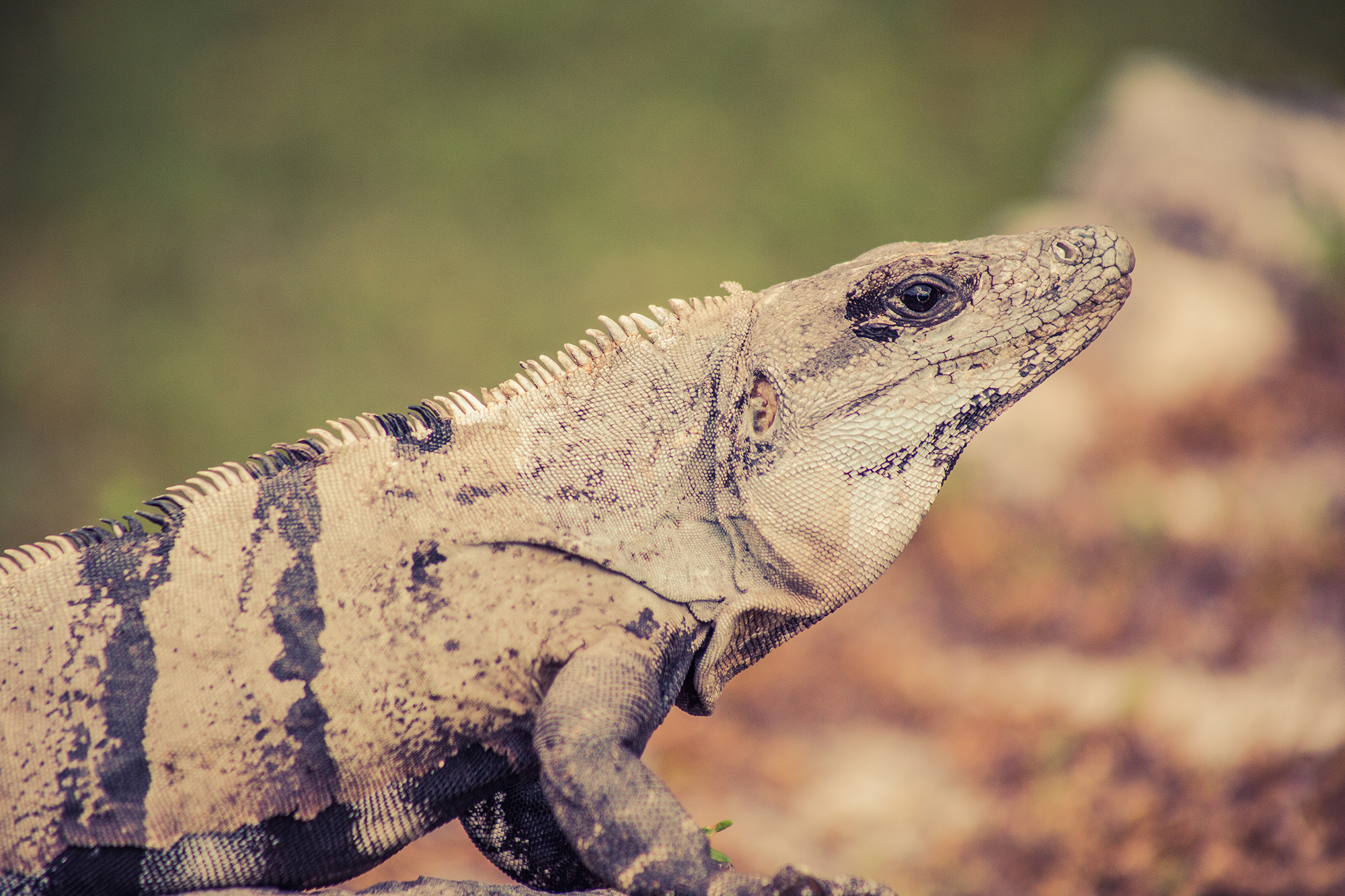 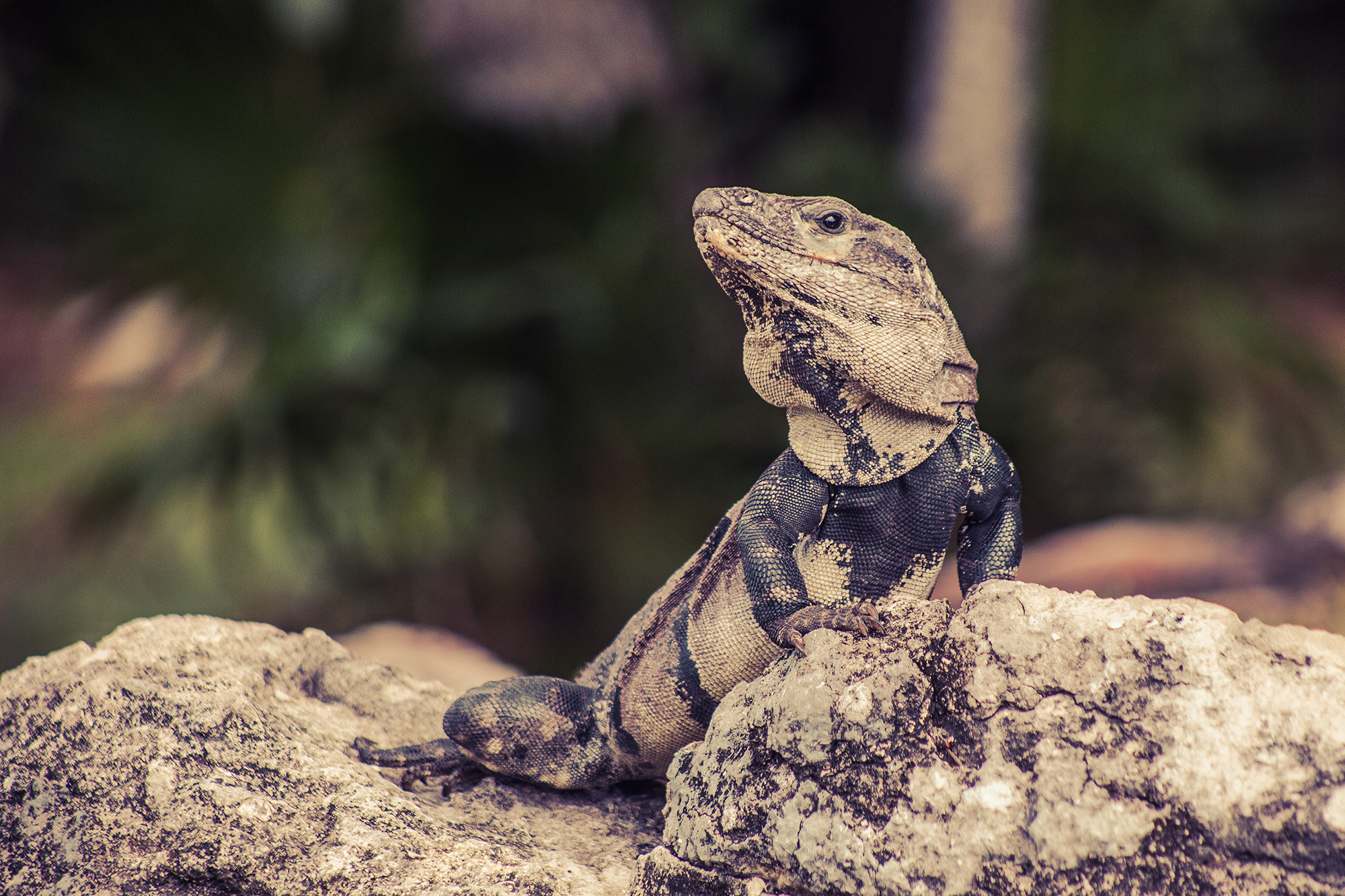 They didn’t mind me as much as the guy out on the street had, so I could get rather close, which was cool.

There were also some birds here, and one of them I’ve seen around Cancún several times. Well it’s probably not the same one, but you know, the same kind. It looks rather unusual with its very long, thin, lightly crooked beak, but I have no idea what type of bird this is. If anyone knows please leave a comment. 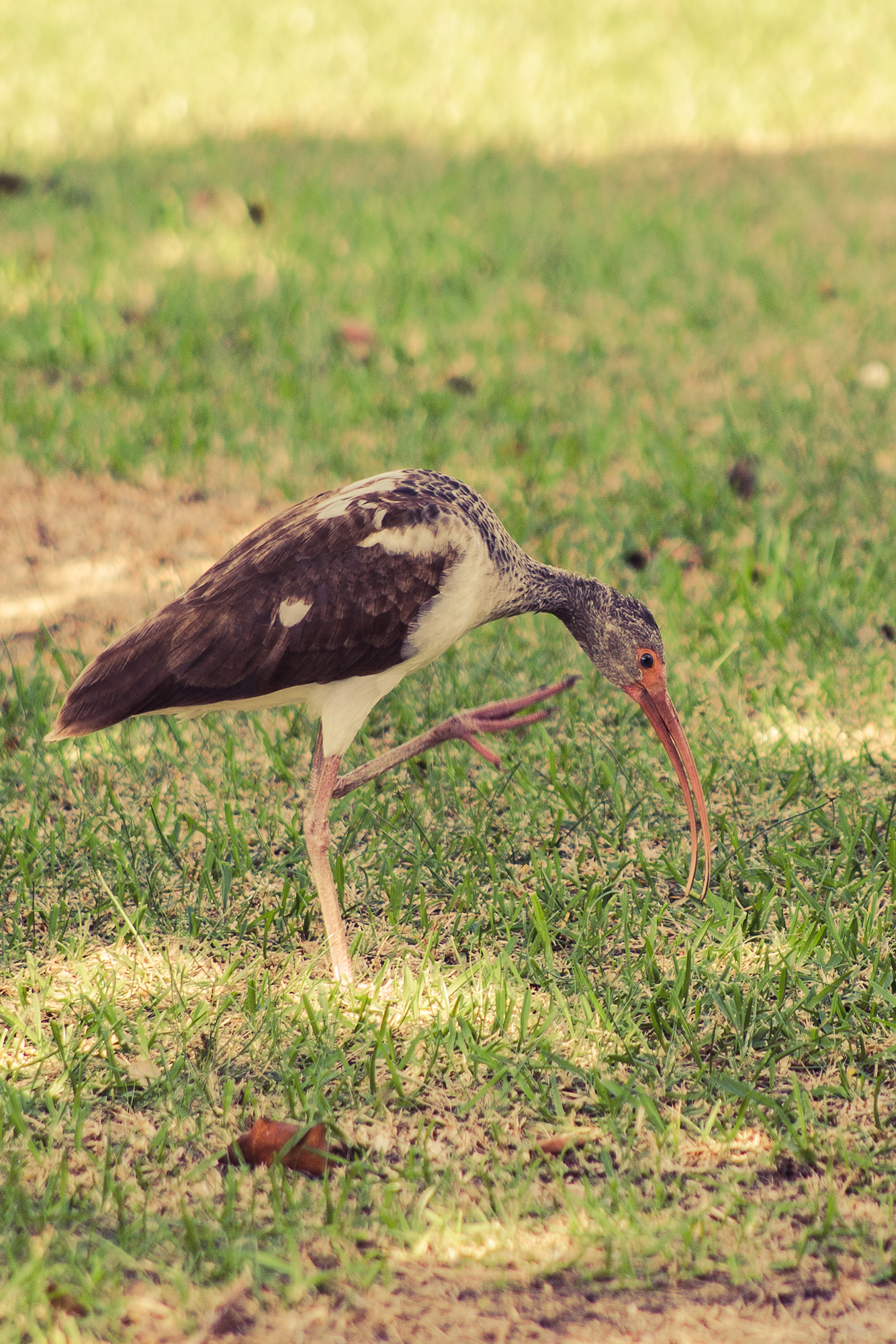 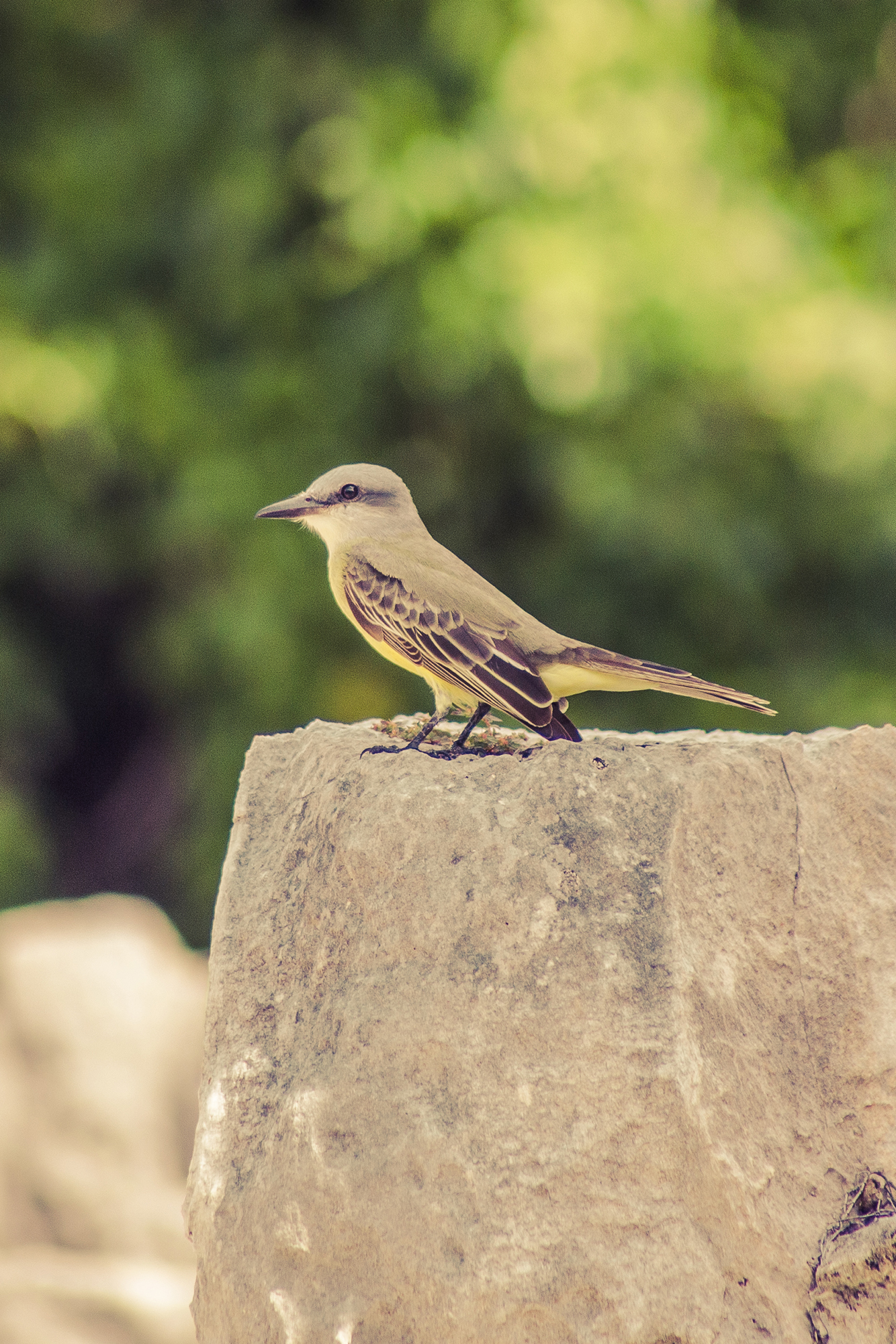 Some not-so-pleasant animals were the tiny-tiny-tiny fly. I have never seen such a tiny fly in my entire life, and they were absolutely horrible creatures – they bit me all over! The bites hurt like hell, almost like a wasp sting, and resulted in big bumps that lasted for over 3 weeks! I believe this mean bastard was called “biting midges”  according to the lovely world of Wikipedia.

I experienced almost the same thing visiting Chichen Itzá, but that time I came prepared at least, poured mosquito repellent all over my body, which they didn’t seem to like.

So that time they struck out, those bloody biting midges!

So if you are planning to visit ruins in Mexico I do recommend you use some kind of bug repellent – even during the daytime, and leave that little black dress in the closet, because these disgusting creatures just simply love black. AND skin! What horrid creatures indeed. It also seems ruins are popular hangouts for these buggers! So be aware!

What about the ruins?

The Mayan ruins at El Rey are from the Mayan kingdom (obviously!) and are over 2,000 years old. No one knows of their original name, and the place received its name “El Rey” because of a statue of a monarch they found there. And if you’re still not following – “Rey” is the Spanish word for king. El Rey is the most important archaeological place in Cancún, but believe it or not, Cancún has more ruins…

The ruins at El Rey aren’t at all as powerful as Chichen Itzá, but it’s a peaceful place (apart from the biting midges!) and you’ll find history here – well worth a visit if you’re in Cancún. And if you’re slightly more extroverted than me maybe you can take the guided tour with the old man 🙂

Have you visited El Rey? What did you think? Did you meat the biting midges? Please share a comment!