Chichen Itzá… A visit to this place seemed slightly controversial. For some… While travelling you, at times, run into people – fellow travellers – who – IMO – have a very strange view on life and the world. And a very strange idea of travelling…

I’m talking about these people who are searching for the “authentic” – nothing else is good enough.

You know those people who feel everything with the slightest amount of tourism is to be shunned, despised, but who often in the same breath don’t have any issues, whatsoever, in taking some drugs on their trip because that is so cool, and you’re on vacation after all…

Don’t get me wrong now, I’m of course searching for authenticity too, a country’s true culture. I’m not travelling to see all the same generic places where they’re selling the same generic stuff and eating the same fast food from the same big chains. I want to experience the truly local domestic, of course.

But sometimes I enjoy getting to a place like Fisherman’s Village on Koh Samui, or Playa del Carmen, Mexico.

I’ve been to small rural places in Nepal and Thailand, amongst other countries, where I’ve been the only foreigner around. Experienced true Nepalese and Thai culture – and that is why I’m travelling! At the same time, the spoiled person within appreciates being able to quickly run into a place to get a cheap massage and/or sitting down in a nice restaurant by the seaside where they serve you freshly squeezed juice or smoothies.

They don’t drink freshly squeezed juices in the bush – that I can tell you – they drink moonshine or Coke!

And yes, maybe I’m a bit lame for appreciating this tourism crap, but isn’t it all about comfort and getting some luxury if I feel like I need it? It doesn’t mean I don’t appreciate what’s unique for Nepal or Thailand (in these cases). It just means I’m spoiled after all…

I want a perfect mix of both.

One of my favourite movies is the Swedish movie  ”Once upon a time in Phuket”. It’s so silly and perfectly nails it concerning Thailand and the many people who go there. I could relate at once – the people I’ve met – those who say they are there for the real experiences, the “real” Thailand (or India, or whatever country you’re in), and then hang around somewhere only with other travellers, speaking English with each other, doing drugs all day every day.

It’s also these types of people screaming they could never visit a tourist place, not experience anything “everyone else” has done. They want to reinvent the wheel, see the heart of the country – hang out with the locals etc etc yada yada ad infinitum.

In Mexico, there are 35 UNESCO World Heritage Sites, and Chichen Itzá is one of them. For me, it’s an absolute must to see Chichen Itzá while I’m here (as I’m writing this I’m in Mexico). Well, maybe this is slightly judgmental of me, but I need to say this – I’m shocked as hell when I hear people don’t want to see Chichen Itzá because it’s “too touristy”.

Well this is obviously not the mainstream idea, because there were plenty of people while I was there. Some completely refuse, however, to even go there because “it’s too touristy”. To even write these words feels absurd.

Yes, well of course it’s touristy, it was one of the largest cities in the Mayan empire. It is one of the world’s wonders, for crying out loud! You should skip it because it has now become “too touristy”?

Well, each and everyone do as one pleases, of course, and in hindsight, I admit it was touristy. There were loads of vendors inside the area of Chichen Itzá, but in all honesty – compared to the ones I met while visiting Angkor Wat in Cambodia – these people were kittens.

In Cambodia the children were running after me, nagging me that I “really needed to buy this for a dollar”. And then they looked at me with these large brown sad eyes to really break my heart in pieces – a conspiracy right? The vendors at Chichen Itzá were all relaxed, screaming “hola” and “1 dollar” here and there, but there wasn’t much more action…

Did it ruin the experience? Absolutely not.

Have you ever been to the Chinese Wall? On 2 separate occasions, I’ve visited Mutianyu – 23 years apart. Nowadays it’s pretty much of a carnival going on there – compared to 1994. If you also look at the photos from Badaling, which is where most Chinese go when they want to experience this wonder, it looks just crazy! So full of tourists heads and vendors I doubt there is room for even one single little soul up there on the wall. On the other hand, I know from experience that there is always room for one more Chinese…

But I don’t care! I want to experience the ancient culture, the wonders, the other stuff – I just tune it out.

In regular ruin procedure I had made sure I arrived at Chichen Itzá shortly after opening. On the parking place there were already buses parked; buses from Cancún and other vacation destinations in Quintana Roo (Yucatán).

I’m an introvert (wasn’t that a shocker!), so I hate group tours and other silly things where you get bunched together with strangers forced to be social and behave. It can ruin my total experience. I’d rather get around alone, so I don’t have to talk to anyone (!).

That’s why I chose to stay a few nights in Valladolid and used that village as a starting point for my visits to the Chichen Itzá and Ek Balam. This also made it possible for me to arrive slightly earlier than most of the busloads, which was appealing. 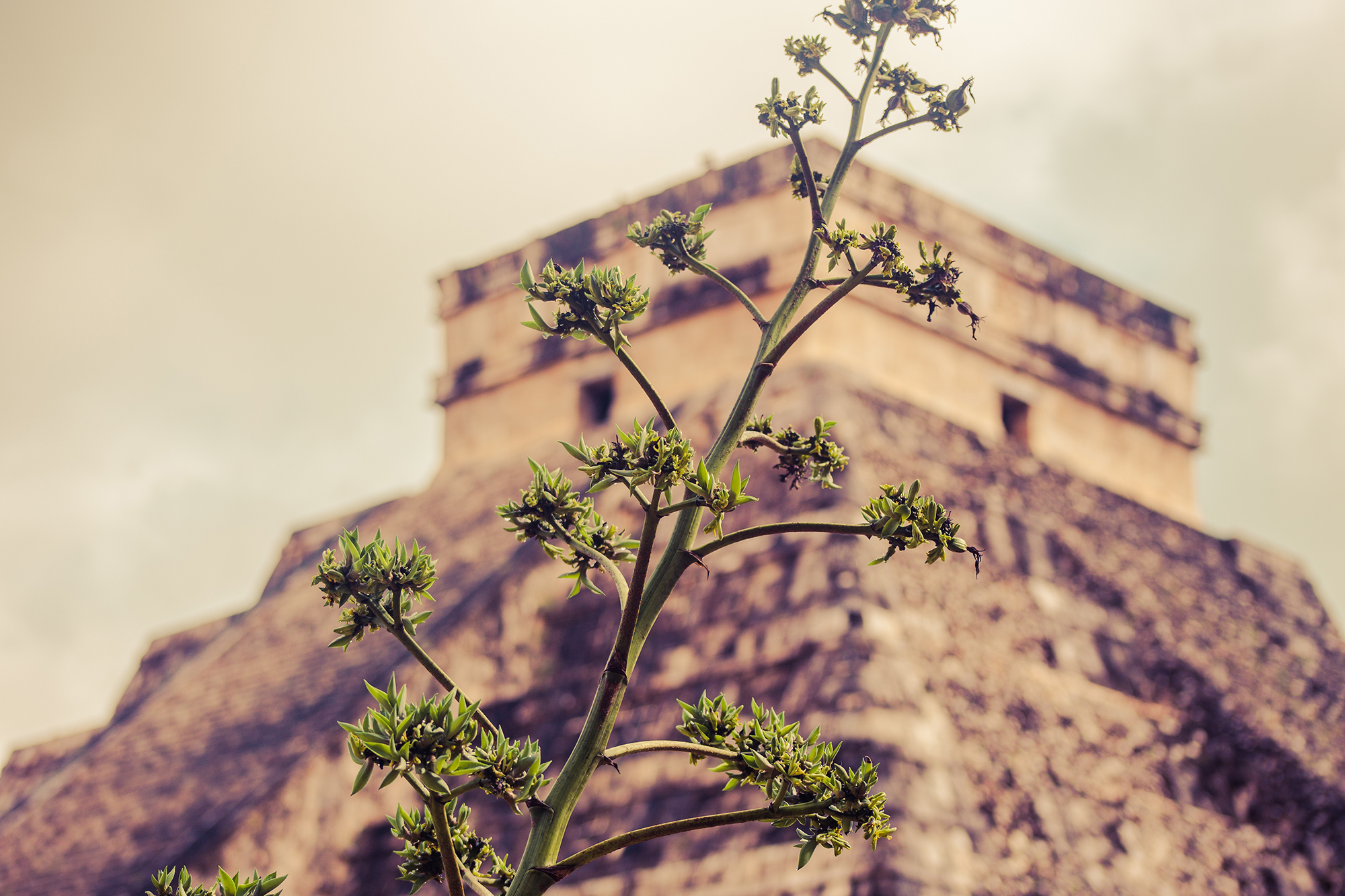 The first thing I saw when entering the area was  ”El Castillo” – The Temple of Kukulkán – which is the most famous building at Chichen Itzá. It was pretty devoid of people so I got some nice shots, and at the same time got the chance to feel in the atmosphere.

When too many people started clapping their hands (that’s a thing you just need to do!) on the “front” where I was, I simply just walked around the corner to the other side – and there was nobody. Perfect!

The pyramid isn’t fully restored on all sides, and since I like ruins I of course prefer when it’s not perfectly restored. 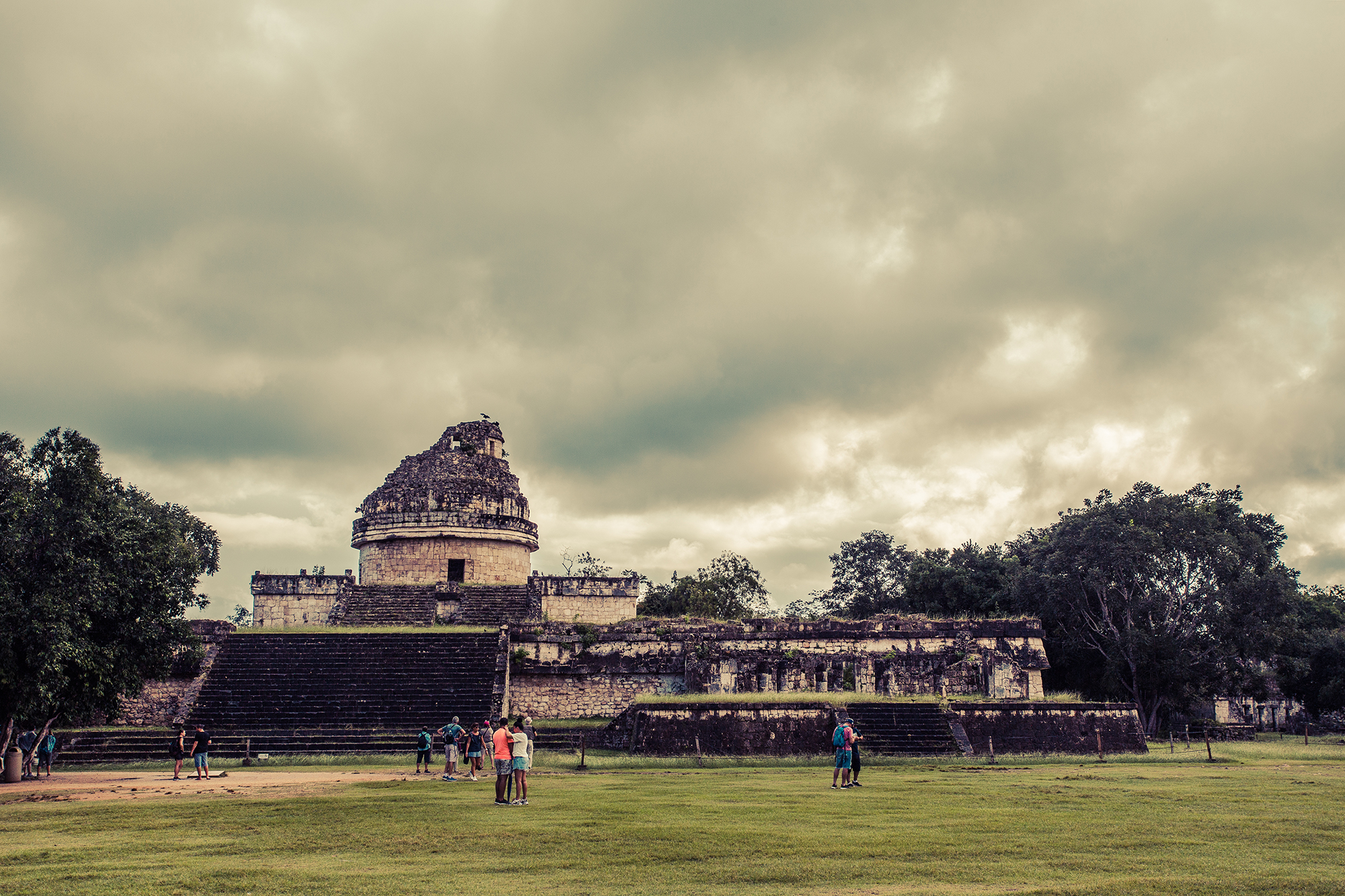 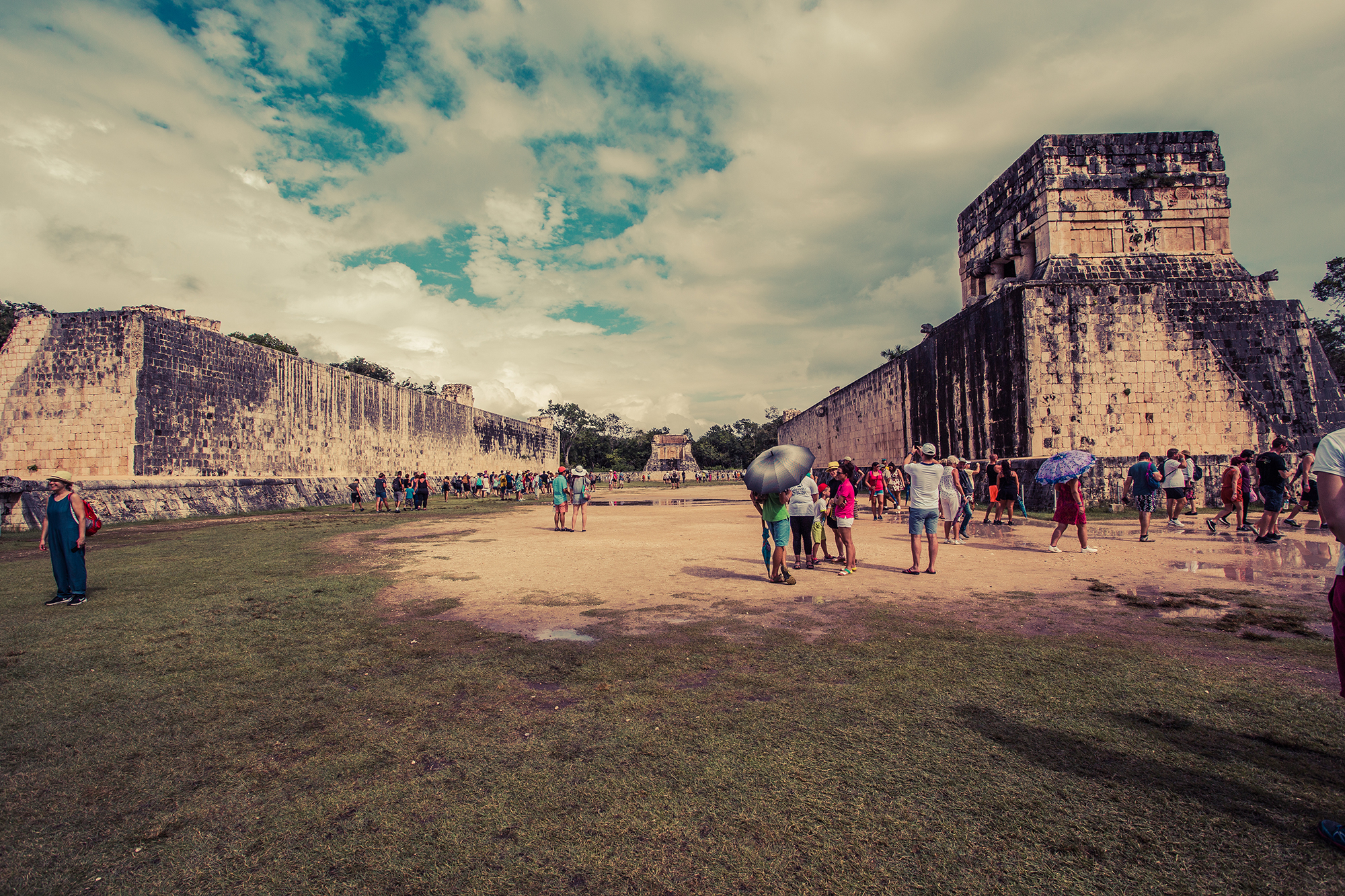 This is what it looks like when it’s “too touristy” at Chichen Itzá – people everywhere… Soo crowded! 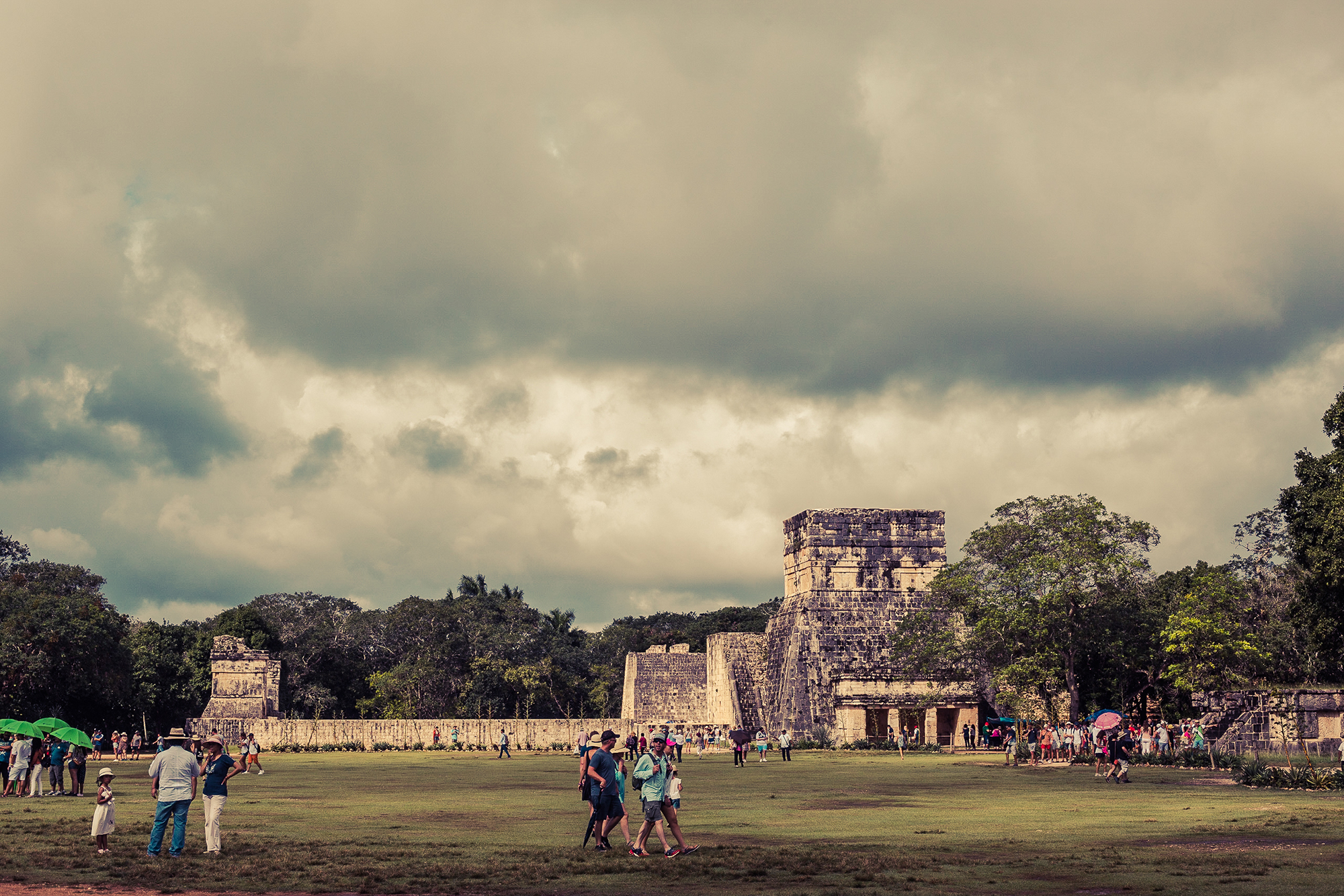 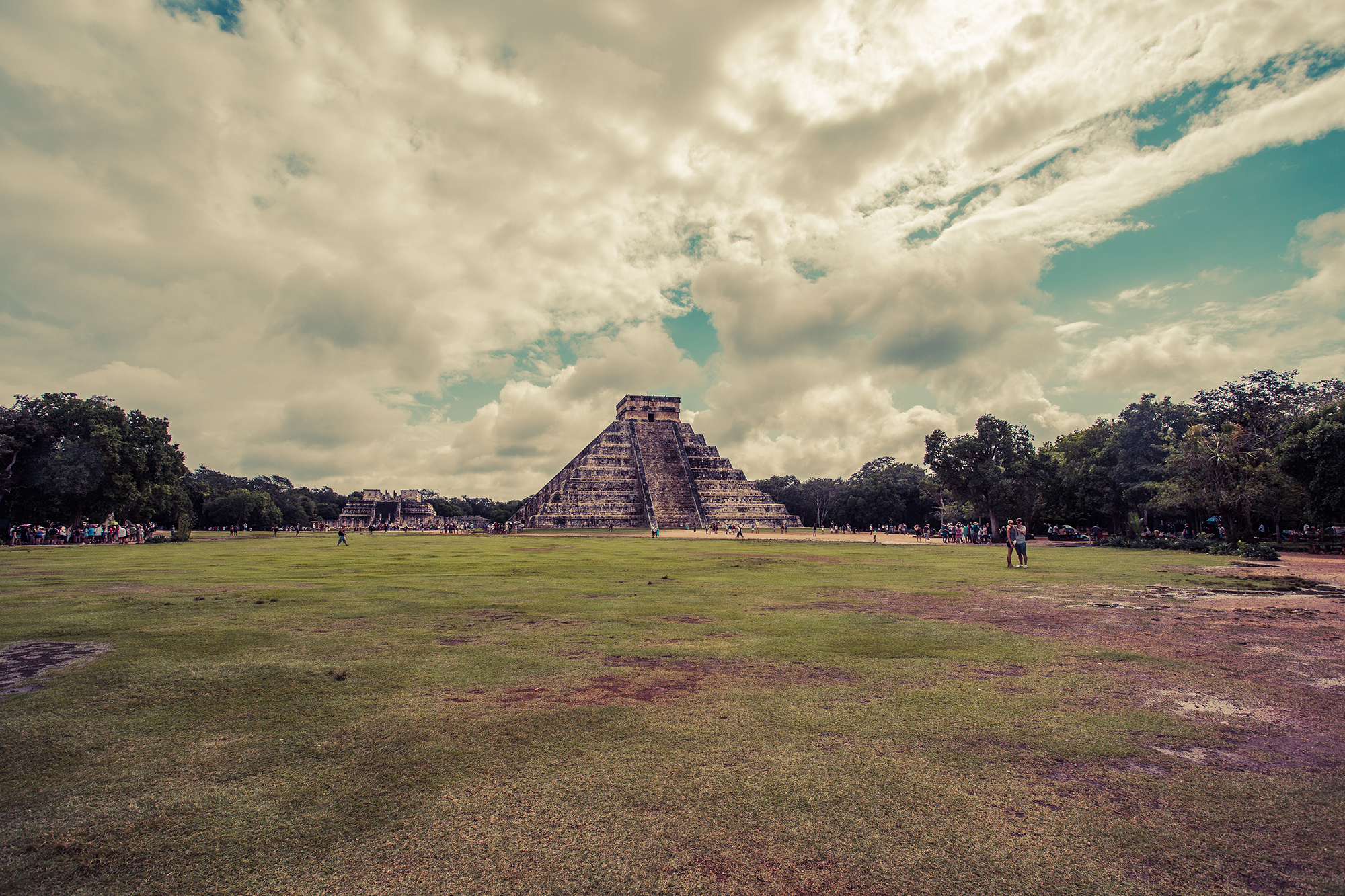 After a couple of hours the people started pouring in and when I left Chichen Itzá there were too many people everywhere. I was listening in on 3 Danish young guys taking shots of each other in front of “El Castillo”. They were discussing back and forth whether they should walk around the area to see the rest of it, but decided to:

No, that’s enough. We got the shot!

So, yeah, that’s all well and good I suppose – to tick off the wonders or chasing likes on Instagram…

Of course, I too snapped a selfie in front of “El Castillo” when I arrived. A girl needs her memories! 😉 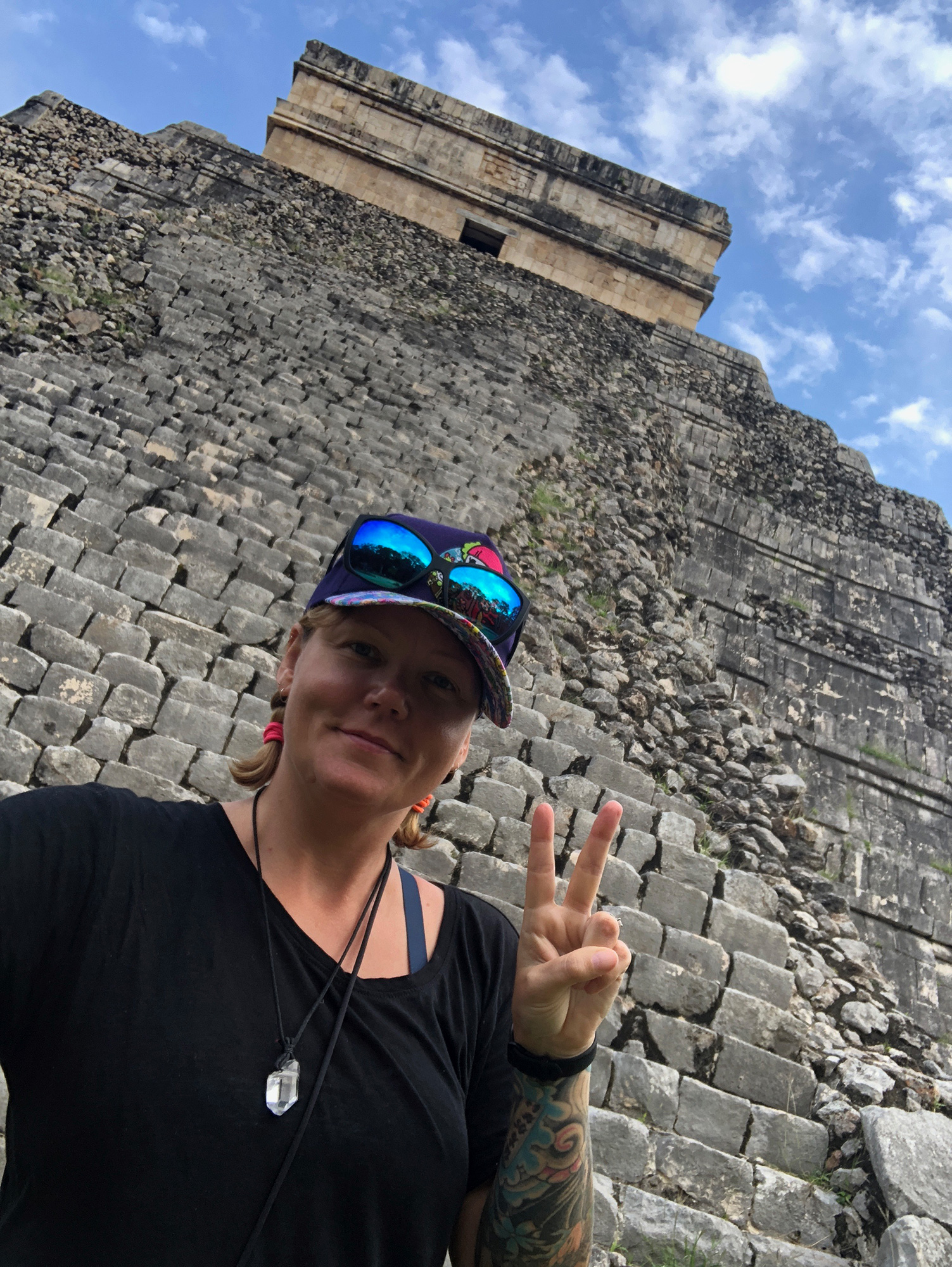 Well let’s get back to the shock inspiring me to write this post: even if it’s crowded I don’t understand how one could choose not to go to Chichen Itzá and instead go watch some of the lesser famous ruins, like for instance Ek Balam.

In the end – I can’t relate to the thought of skipping a place because it’s “too touristy”. At least not when it comes to the wonders of the world. There is a reason why Chichen Itzá has become touristy, and why you want to miss out on it while you’re there is completely incomprehensible. Just go before the crowds and you’ll be fine…

What are your thoughts? Am I being narrow-minded here? Judgmental even? Please leave a comment…