Like complete morons, children as we were, we ran around in Asia…

Weird travel memories – don’t we all have them? I’d like to share some of my weird travel memories. These are however only memories from my very first backpacker trip 1994-1995 with my best friend Pernilla, also mentioned in rather unflattering words in the post “Travel-like-a-local-nostalgia”.

On our very first trip, we had decided on a somewhat complex journey. China was our first stop, after a quick visit to Moscow, before jumping on the TransMongolian train. Arriving in China we took trains all over the country and the end station on this continent was: HongKong (which back in those days still belonged to Great Britain).

Our plan was to get to India from HongKong, but instead, we were drawn to Thailand. Spending some relaxing weeks on the beach filled with sun and alcohol was too alluring to resist. After 3 weeks in Thailand, including some weird travel memories, we moved on to India and Nepal, to finally end up – in one piece (or 2), though rather dirty – in Sweden again.

I mentioned the journey was complex, and it was, in the way that these were tricky countries to visit as first countries, apart from Thailand, of course, but the others… In China, they spoke no English, and OBVIOUSLY, we didn’t speak any Mandarin. In India, they constantly tricked us, making me constantly angry. Coming to Nepal was in many ways equal to ending up in Nirvana…

I learned so much during this first trip, amongst other things that I never want to stop travelling. Ever. It’s probably also true that the first one always remains something special, no matter the subject. My wacko travel memories from this trip are close to my heart, even though some memories are… hm, complex… 😛

Constantly angry I dived full-on into a truly intensive argument with a fruit seller on a bus station somewhere in India. The fight had arisen because he tried to over-charge me. I was about to buy 1 kg Oranges and upon payment he suddenly demanded double the amount.

The total sum I was demanded to pay was 1 dollar, which meant he tried to cheat me of 50 cents!

In the end I had to pay this preposterous price of course. I wanted the Oranges, and he knew that. I was, as always, the losing party in India…

When the bus arrived in Kathmandu it was already dark. We had to trust the tuktuk-driver, believing he would bring us somewhere nice, because we had no idea, and we saw absolutely nothing in the pouring rain. The place seemed ok, though, and they put us in a small one-room house built on top of the roof terrace. In the middle of the night, Pernilla woke up, started mumbling. The rain was still pouring outside and something was dripping down into her bed and her face. I turned the lights on to see if it might be rain, maybe the roof was leaking.

No, it wasn’t rain, it was carrion insects!

All of a sudden we were wide awake, sitting straight up in my bed. The both of us. Pernilla had done the only wise thing – fled her own bed! Staring at her bed we were totally convinced there was a body “buried” up on the roof. Where could these white carrion insects come from if not from a corpse? No – the signs were all there – we were sleeping under some dead dude.

At sunrise, we packed our stuff, went downstairs – refused to pay for the room, while screaming unpleasantries to the staff, who refused to believe us. We left the accommodation without paying and moved to Freak Street. The coolest street to live on before Thamel was the area to be.

Happily accepted an invitation to join a Chinese woman for dinner in her home. What an adventure, and how interesting it would be to see how they actually lived in China! It was me, Pernilla, and 2 travel buddies we actually shared a cabin with on the TransMongolian. A couple from Stockholm, who we really clicked with, and to our joy – destiny wanted us to reunite for New Year’s in Yangshuo.

The woman served a tasty dinner of some vegetables and rice. We had a nice time and her kids were cute little monsters. 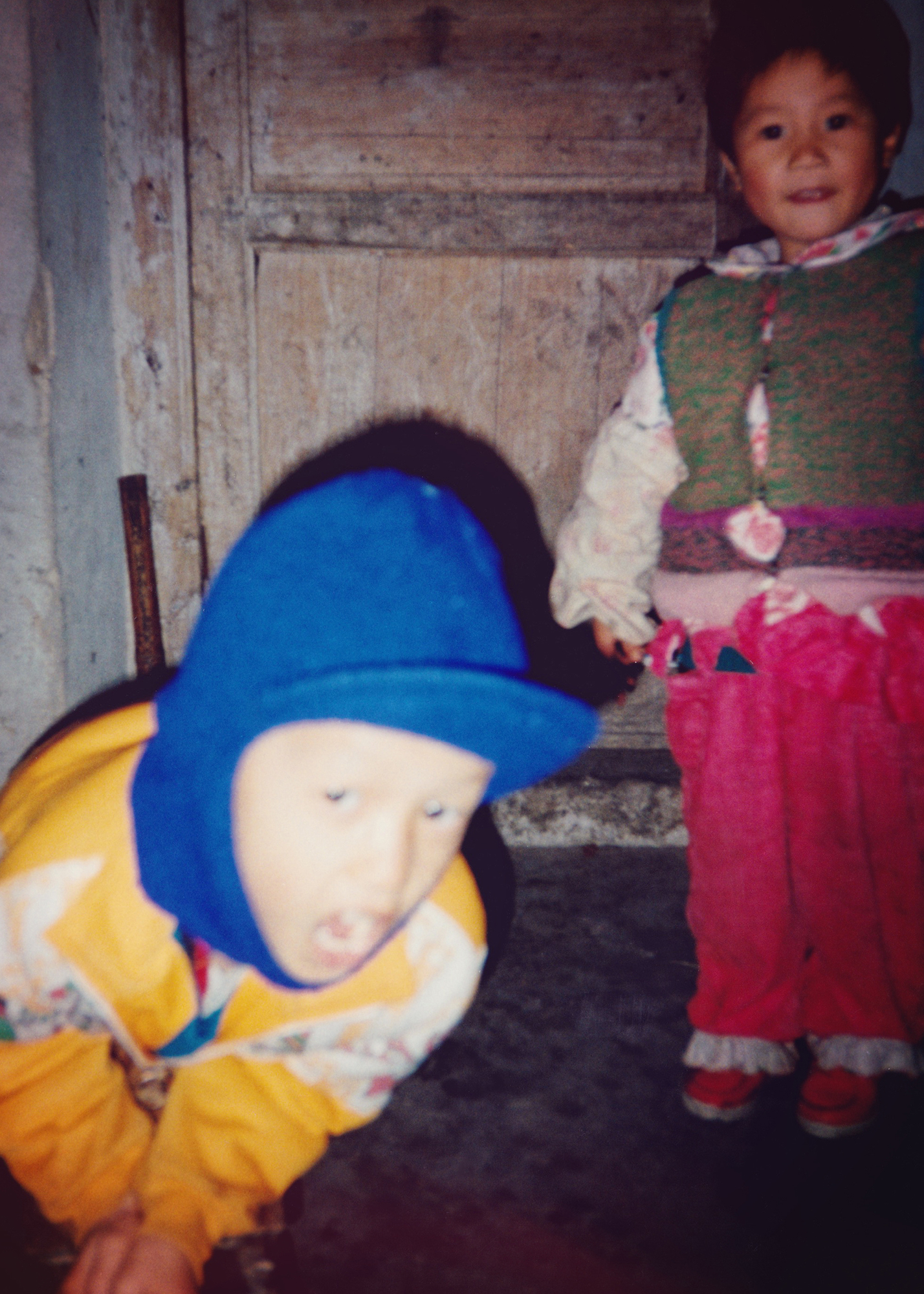 All of us stared naively at her outstretched hand after dinner. Now she wanted money?

When we finally had agreed on giving her 6 dollars, which back in those days would buy all 4 of us at least 2 restaurant visits each, she was very displeased. Her dissatisfaction annoyed us. It was the end of our journey in China, and thus far our experience of the Chinese had mostly been they demanded money for any and every tiny little thing. Even though it always started out as a free offer…

Climbed out through a bus window…

This bus, full of people, was so heavy it couldn’t even move forward. Even so, the Chinese continued to press in, while they were laughing heartily.

You have to admire the Chinese ability to laugh in all situations!

Me? I was mostly busy with claustrophobia and hyperventilating in some random Chinese person’s paper bag!

Lounging around with random babas and wanna-be sadhus all over the country. The discussions revolved more around materialistic worldly things and no deeper philosophies if memory’s not failing me…

Money will often lead to weird travel memories, and especially if you don’t really know the amount you’re actually holding in your hand. Or what the currency is worth, thus how much it can get you. In Moscow we exchanged 1 USD into Russian ruble, thinking we would not spend it all at once! Get caught in a spending spree or something crazy…

Everyone said Russia was so cheap!

Disappointment rushed over us as we discovered the money wasn’t even enough for a Coca Cola, so we decided to go back to the hotel’s exchange office to make another exchange. After discussing back and forth we decided to exchange yet another dollar (!). Well, it’s important to not go overboard…

I hardly need to mention I’ve never before (nor after) spent less money in my entire life than I did on my first backpacker trip!

Forced a poor Chinese woman bartending in a bar/restaurant to fry me some rice, in the middle of the night, when the kitchen was already closed. But I was so hungry and my logic waterproof (and maybe somewhat racist):

“All Chinese can fry some rice, right!”

Shockingly enough I was right because it sure was tasty! Or it might have been the alcohol since this was early on New Year’s Day after a whole night of partying on New Year’s Eve!

Hitchhiking with a gang of random Nepalese guys? Ah, well… we were after all late for our dates with our “local bad boys” (they weren’t bad at all – just a fun expression!) on Swoyambhu . However, our newfound friends wanted to bring us to a place for drinks before taking us where we wanted to go. Apparently, we needed some Chang/rice wine.

So this time too we managed to get there in one piece! Although pretty drunk. Amazing!

Enjoyed (!) a disgusting red wine to the tones of old fashioned (although quite trendy at the time) Goa trance at my very first rave party. We quickly realised we were the only ones drinking alcohol though! All the other cool hippies were only drinking water…

And finally: No 1 – The weirdest, odd and maybe the stupidest of weird travel memories:

Travelled all over China, from Beijing in the north to Yangshuo in the south, with a real sword by my side! I bought it in Beijing but wasn’t able to send it back home to Sweden. I tried in every city, but in every post office they screamed loudly: NO CUSTOMS! as soon as they laid eyes on me and my sword…

In Yangshuo, I finally managed to send it back home, which was pure luck, since Yangshuo was our last stop in China.

Something positive in dragging it around the whole country was that we had protection against the homicidal Chinese! Well, to be perfectly honest, they were hardly homicidal. They were however quite curious and fascinated seeing this white girl running around with a sword by her belt, so I don’t really know if it was good protection or not…

Today they have metal detectors in all train stations in China, so I doubt I could’ve travelled far today in this same manner…

I love to travel. Travelling is what makes my life worth living, experiencing new cultures, meeting really unique characters, and discovering new sides of yourself.

Thinking back remembering all weird travel memories I thank my guardian angels (yes, I’m pretty sure I have at least 1, probably more, since I’ve always managed to come out on the other side rather unscathed!) they have always let me lose control completely without having any particularly rough war scars to show afterwards.

Thankfully I’m much older today and somewhat wiser, but I wouldn’t have been on this particular page in my book hadn’t I experienced it all, and well, so much more… 😛

We are all children of our actions…

Have you done something crazy abroad, which you today question? Please leave a comment…

Photo of the Month: Ayutthaya, Thailand