So, well, Yangshuo China. It was really exciting returning to a place I had visited 23 years earlier. I was, of course, nervous before I arrived – simply because I truly loved Yangshuo when I was there in 1994, celebrating New Year’s Eve. The village had back then been really amazing, but maybe not really authentic. There was this walking street in the middle of the city – West Street – full of backpacker places.

The Yangshuo countryside is unreal, it’s so beautiful, and artists have been coming here for centuries painting. All paintings you see from China with these classical mountains – this is it. Mostly.

Unfortunately, I don’t have any photos of me on West Street from 1994, only photos from our favourite place Lisa’s café, whose owner looked exactly like my mom. Or at least that’s what we thought, in our alcohol haze. Back in the day, we saw copies of people everywhere…

The city had changed. No doubt about it. I wrote in this post “Returning to China – 2017 – HERE I COME!” that I was looking forward to returning to Yangshuo, “a small lush pleasant village with 900 inhabitants”. Well I don’t know… 😛

Maybe I had been drunk while writing in my travel diary 1994 that Yangshuo had only 900 inhabitants, but plenty of more visitors?

Or had the city simply exploded in growth since 1994? I’ve been trying searching online, but haven’t found anything. So if anyone has any reasonable explanation I’m “all ears”.

Because it sounds rather improbable that the village has gone from 900 inhabitants to 300,000 in only 23 years, right?

Sure, China has turned into a completely different country during these 23 years, but still…

However and whichever was the reality back in the day, Yangshuo China today is a nice small city. Small city according to the Chinese measures, that is, but rather large according to Swedish ones. It’s as big as our 3rd largest city – Malmö. There is this walking street with a lot of tourist places, and it’s pretty much rather international, due to its high amount of tourists.

I want to remember this large road in Yangshuo didn’t even have asphalt back in the day, but this too might just be a dazed memory. 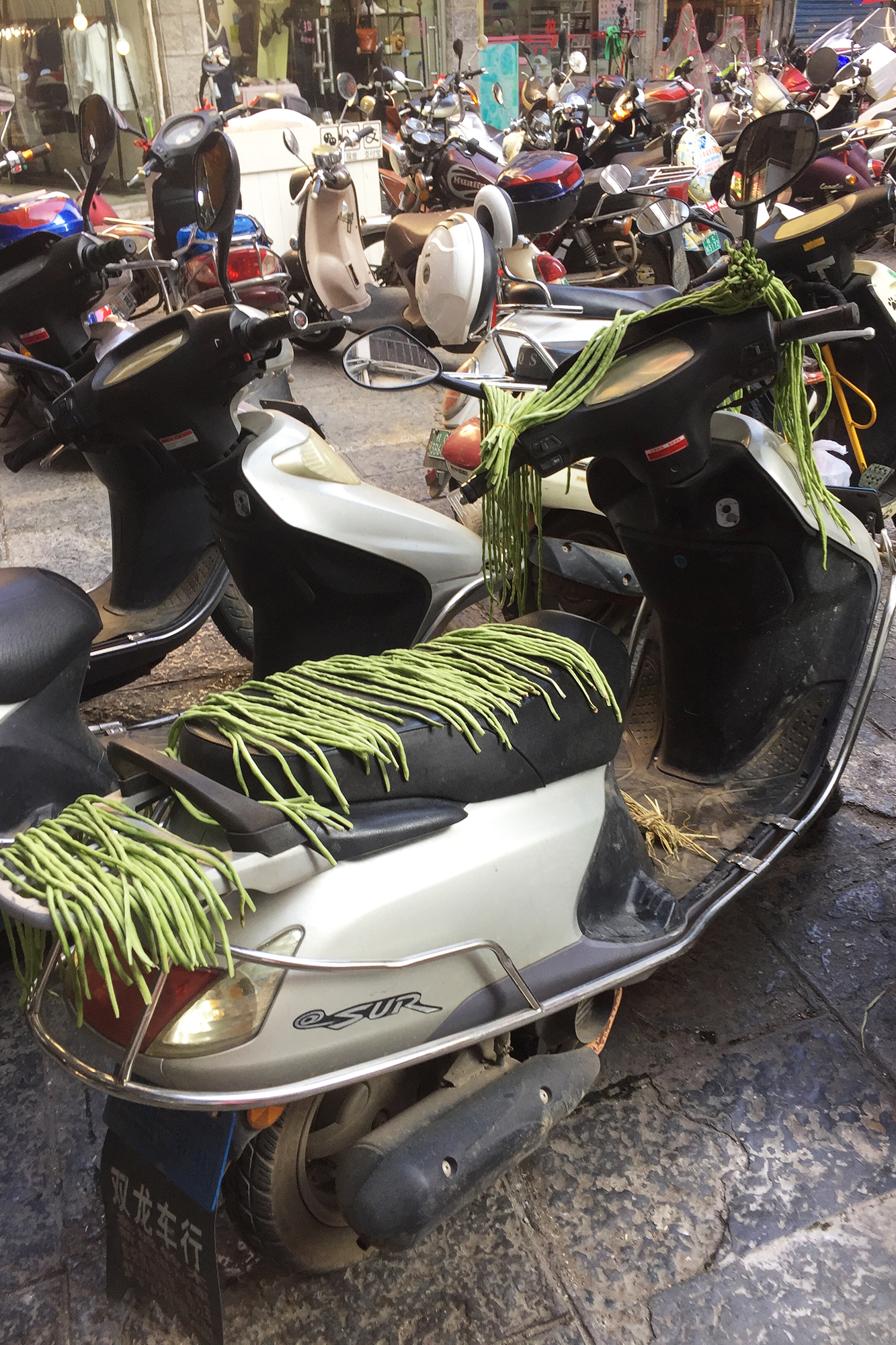 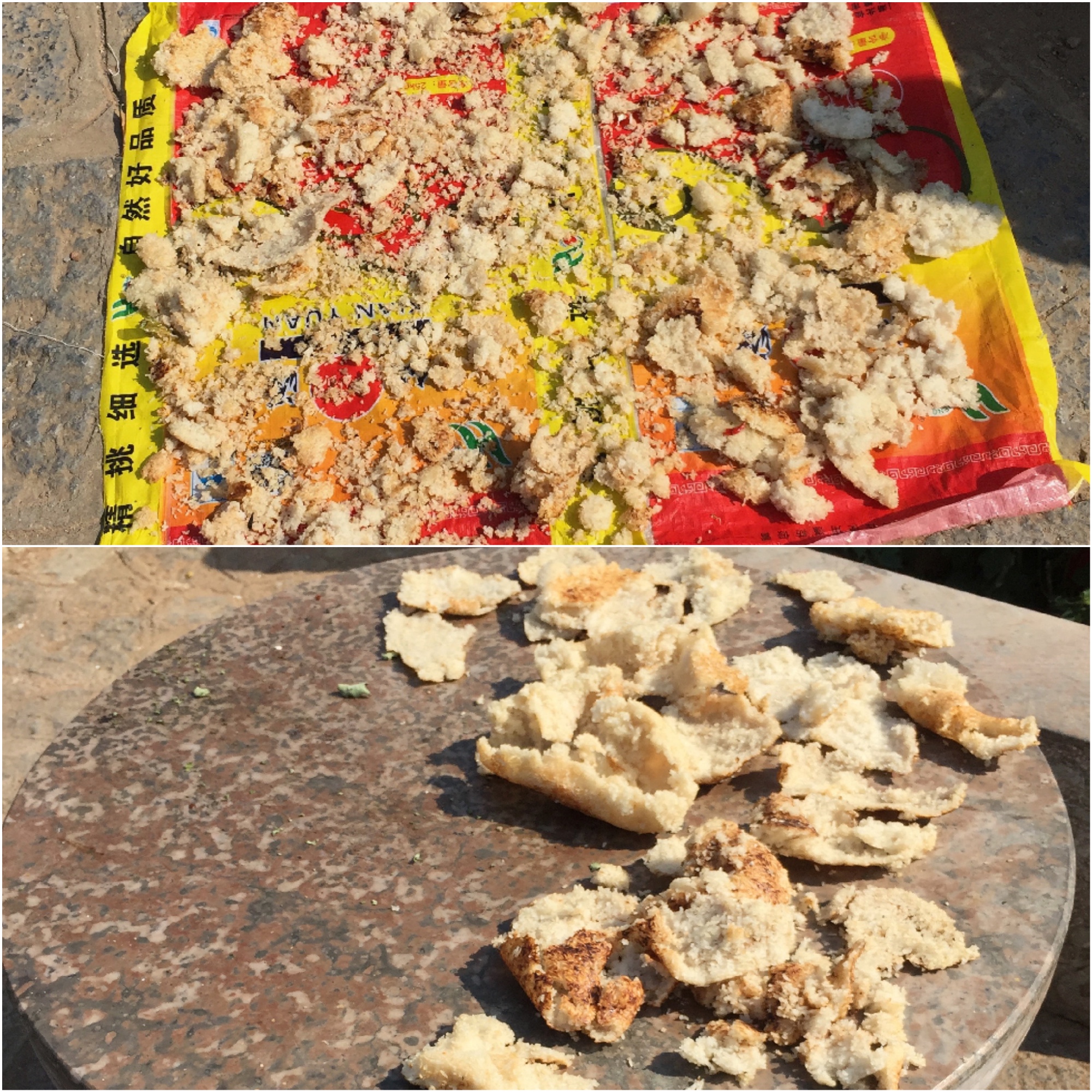 Some funny stuff is going on here openly in the Chinese cities… For example this thing with drying the vegetables/food on different vehicles or other surfaces… What now?

One of the days I was doing my usual mindless walking, trying on shoes here and there. Something I usually devoted my time to in China – the shoes were so cheap! It was insane! A Chinese woman attacked me out of the blue – she needed me to help her.

Of course, I wanted to help! I am a giver, after all…

Had she only told me from the beginning I’d probably had run away quicker than anyone could’ve said “oops”, but it was such a long procedure and completely incomprehensible English and when I finally understood what she wanted me to do, it was too late to bail. By then we were already standing on the footbridge crossing the main road, which is where she had planned to film it. It?

She wanted to record a video with me. A video where I was supposed to be ACTING, reading from a script she had written!

HELP! alternatively OMFG! are fitting panic expressions for such occasions!

So we went for it. I was a disaster, of course – in front of the camera I have always been way too stiff, but she did her best trying to direct me.

“Could you make some more movements?” She showed me how to clench my fist next to my head at the same time while pronouncing the word “problems”. Like to make it clear this was serious stuff!

I can’t even describe this catastrophe, you have to see it for yourself… Some people actually thought I was crazy for sharing it, because it wasn’t funny, it was truly horrible. But that’s why it’s funny – because it’s awful. I mean come on, this is me showing you my most embarrassing moments, right! This is both a fun experience and a fun memory! Hilarious!

From me to you!

Have you been to Yangshuo China? When were you there? What did you think? Please leave a comment!