Cenotes in Tulum are truly something you shouldn’t miss while on the Yucatán peninsula. There are a plethora of them all over the Yucatán, and while I was visiting I swam in a couple of them. Had there only been fewer tourists I’d probably would’ve swum in several more, but well… shit happens.

For all of you who haven’t been to Mexico, the word “cenote” might feel slightly strange. It means “well/spring” in Yucatec, which is one of the Mayan languages, and a cenote is a natural sinkhole, formed by collapsing limestone. After the collapse, the hole has then naturally been filled up with fresh water from underneath. Cenotes are completely natural and quite common in Mexico, and especially on the Yucatán.

On this particular day, I had decided to visit 2 different cenotes in Tulum – Cenote Calavera and Gran Cenote. They are both located along the same road, leading out of town, in the opposite direction from the beach, so it felt convenient to combine them into one trip. The first one you’ll reach if you’re coming from Tulum town, which is what I did, is:

Arriving at Cenote Calavera I eagerly paid the entrance fee of $100mxn. I received a completely naive answer to my question to whether they had lockers inside, where I could lock my stuff up:

There are only tourists inside! They won’t touch your stuff.

Right… well, exactly, because no tourists are thieves…?

Somewhat surprised, and slightly disappointed, I entered the area. When you’re solo travelling this is always a hassle – who will keep an eye on your stuff while you’re swimming? Who can you rely on?

Frequently, this is “no one” and since “no one” isn’t really that dependable, swimming can be stressful.

Well, I didn’t need to get agitated about the whole thing. Cenote Calavera was very crowded anyway, so the introvert completely lost the urge to take a swim. My judgment was that if you’re not gonna go scuba diving here, you can probably skip this cenote (if you feel the need to skip any of them, this could be the one to skip). 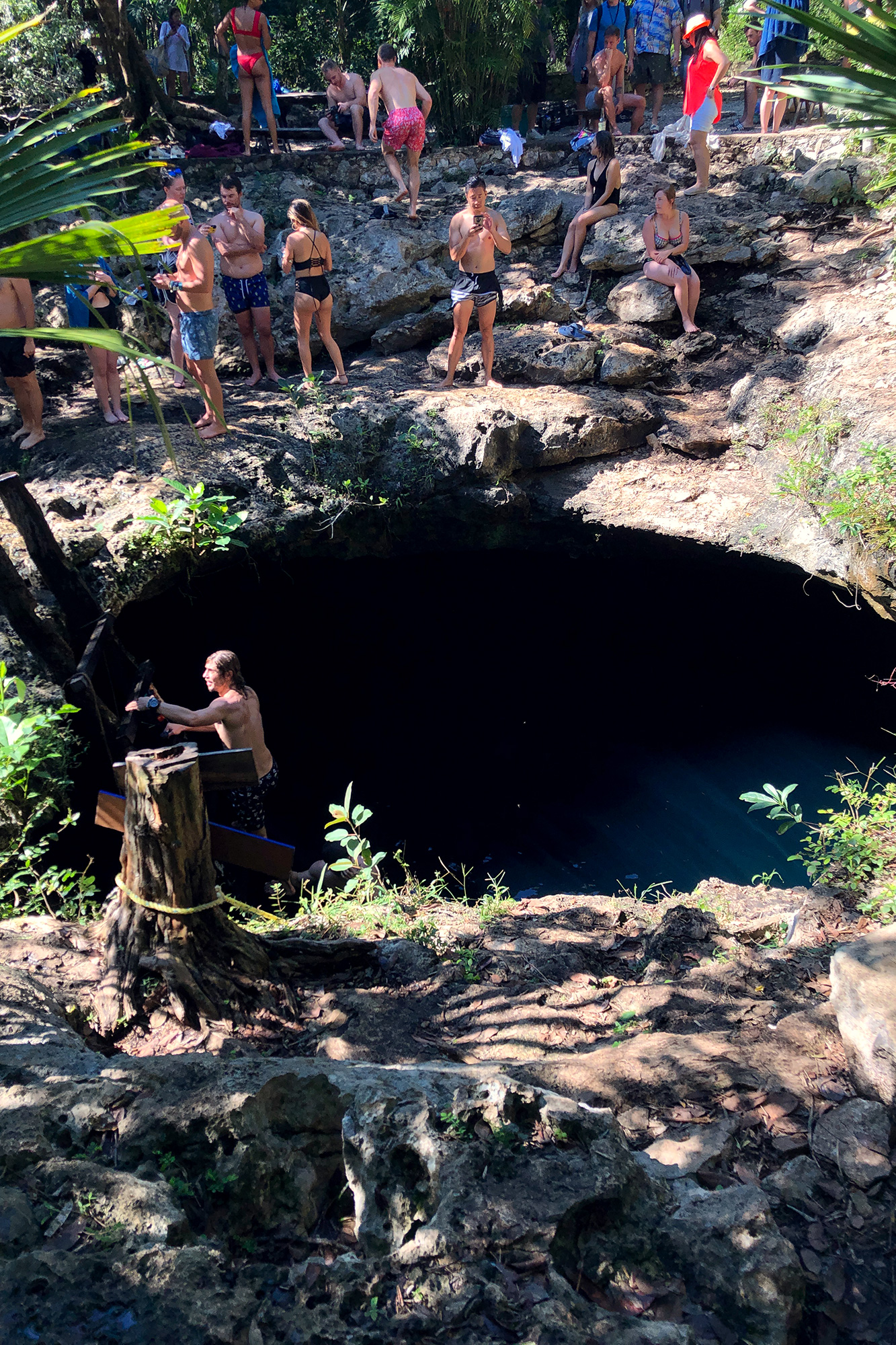 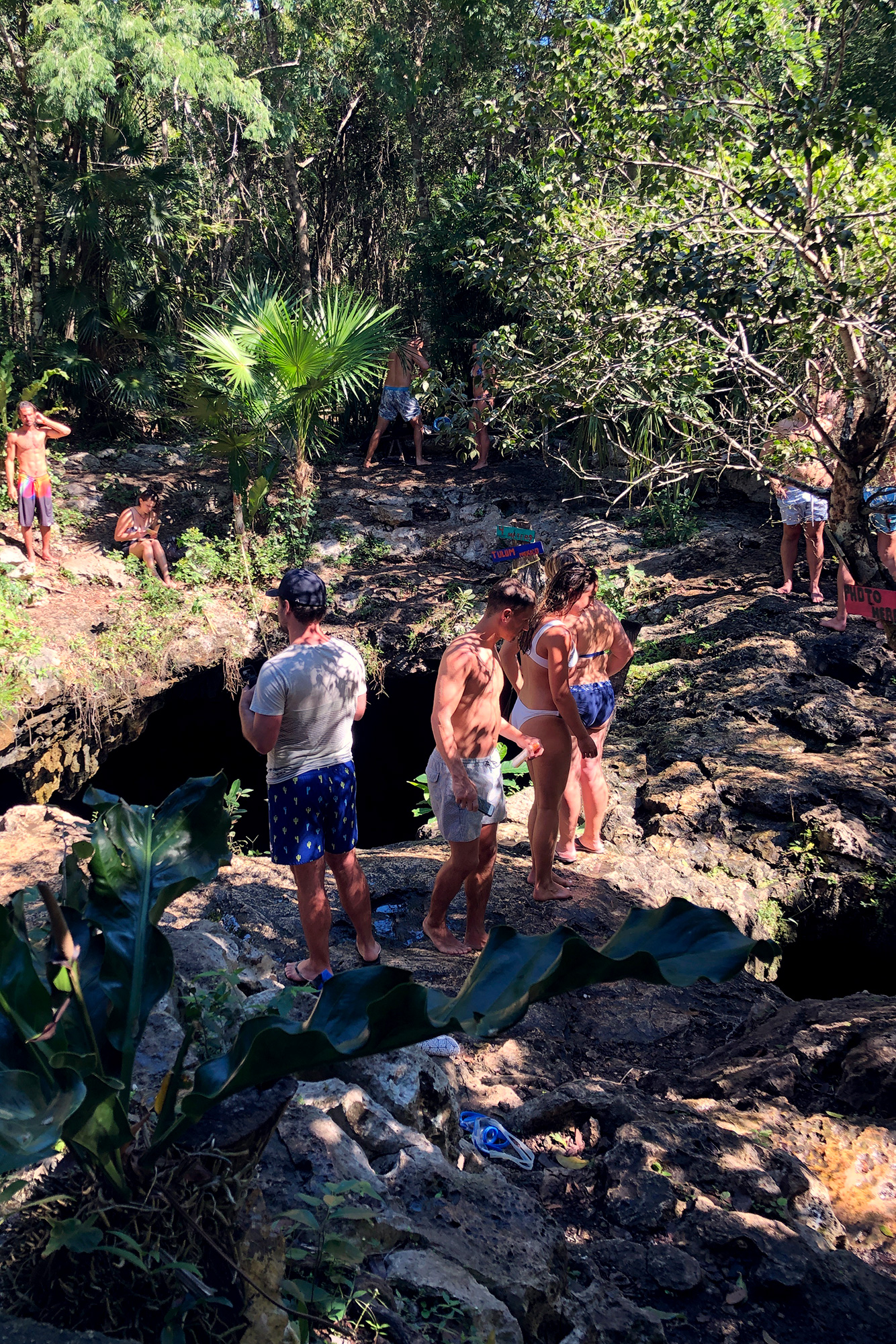 There were people standing around absolutely everywhere, and everyone was surrounding this tiny hole leading into the cenote, which you needed to nail, in order to get down. Get down to what? It was quite dark down there in the hole and without any scuba gear you wouldn’t see jack… well, I don’t know, maybe I’m just being ms Negative here, but I wasn’t impressed…

No, this just seemed like a snapshot from an introvert’s nightmare.

Thus – no swimming in Calavera for me. In my mind I kept a dialogue where I was making up excuses – valid excuses I might add – I couldn’t actually lock up my camera gear. So I had no choice, really. It was probably more about all the people crammed into the smallest of areas! Well you know – read the above line again – completely valid excuse!

I was, however, able to find an exact copy of a weird tree I ran into in Zimbabwe – quite a funny looking tree… with thorns… anyone who has the slightest idea of what type of tree this is, please leave a comment… 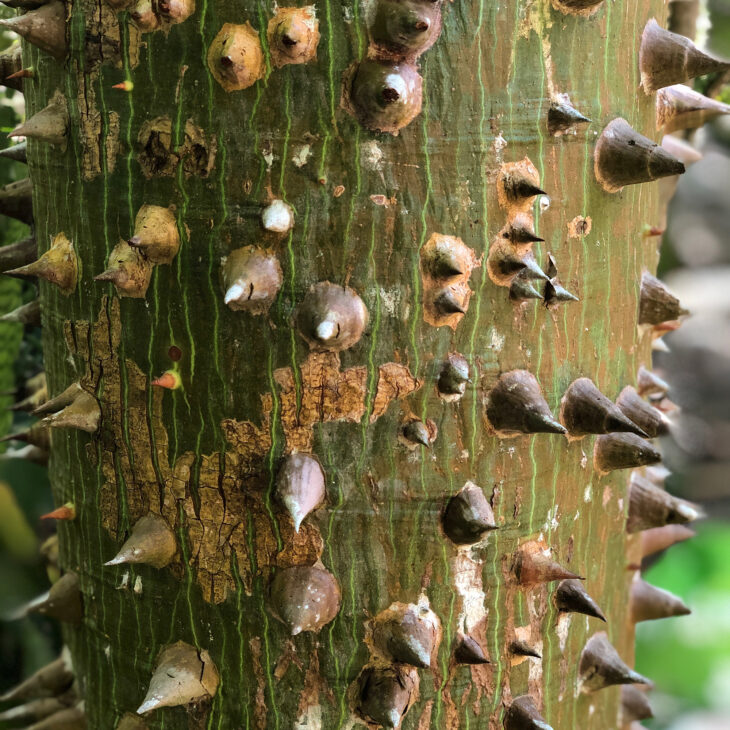 So, disappointed in the first of my two choices of cenotes in Tulum, I cycled on towards the Gran Cenote – the largest in Tulum, hence the name – Gran meaning large. The entrance fee here was slightly higher – if my memory is not failing me the hefty sum was $180mxn. There were quite a lot of people hanging around here too, but since the cenote, as well as the whole area, is much larger, it didn’t bother me. People were also lying everywhere sunbathing, and the athmosphere was just so nice, relaxing. 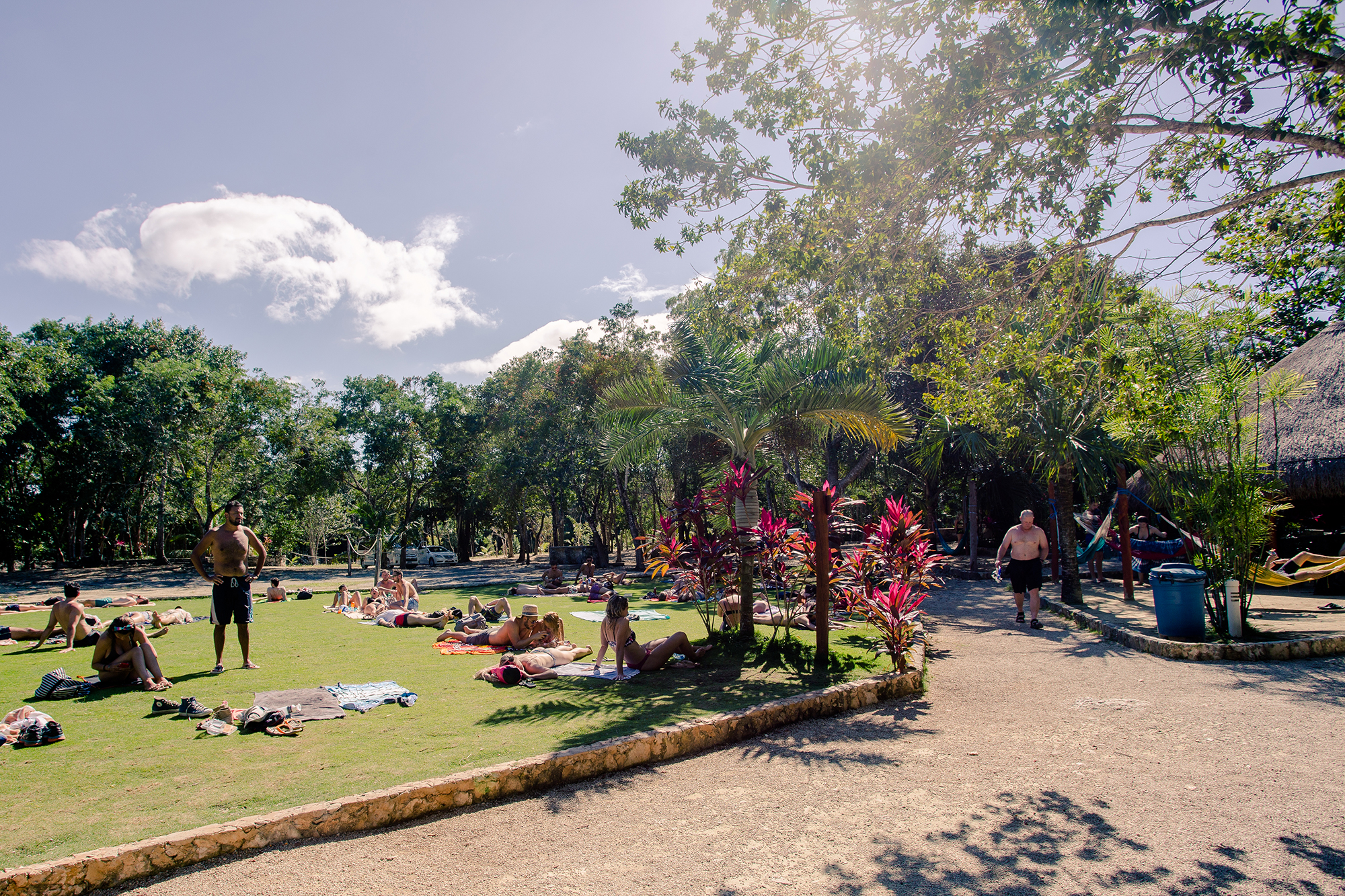 At this place I managed to get hold of a locker where I put my bag + camera (yey! they had lockers to rent!), which was a huge plus. To swim in the cenote while being able to fully relax, not needing to worry should my stuff just walk away by itself – simply just amazing.

I also rented a mask + snorkel to fully enjoy all the wonders around the cenote. 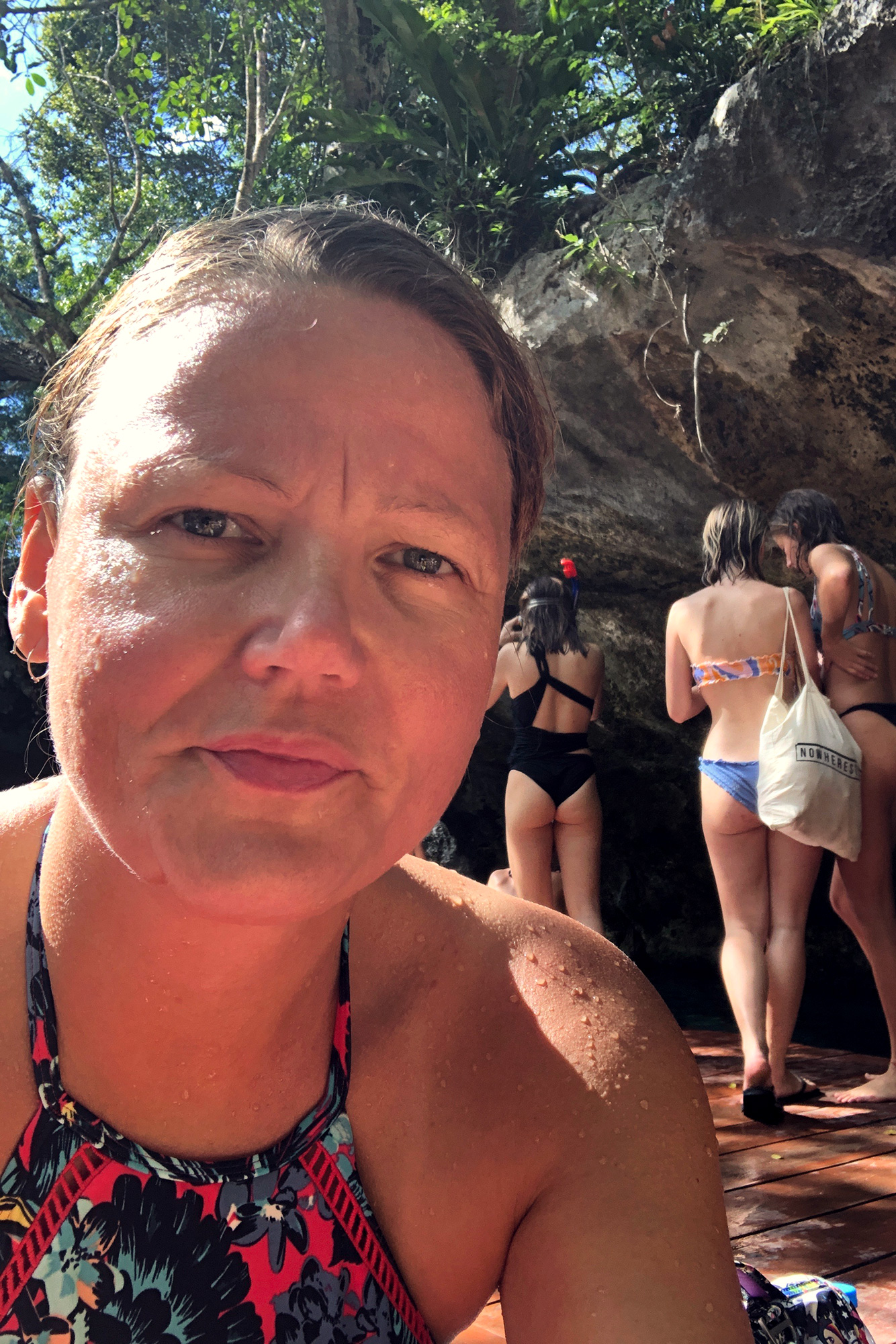 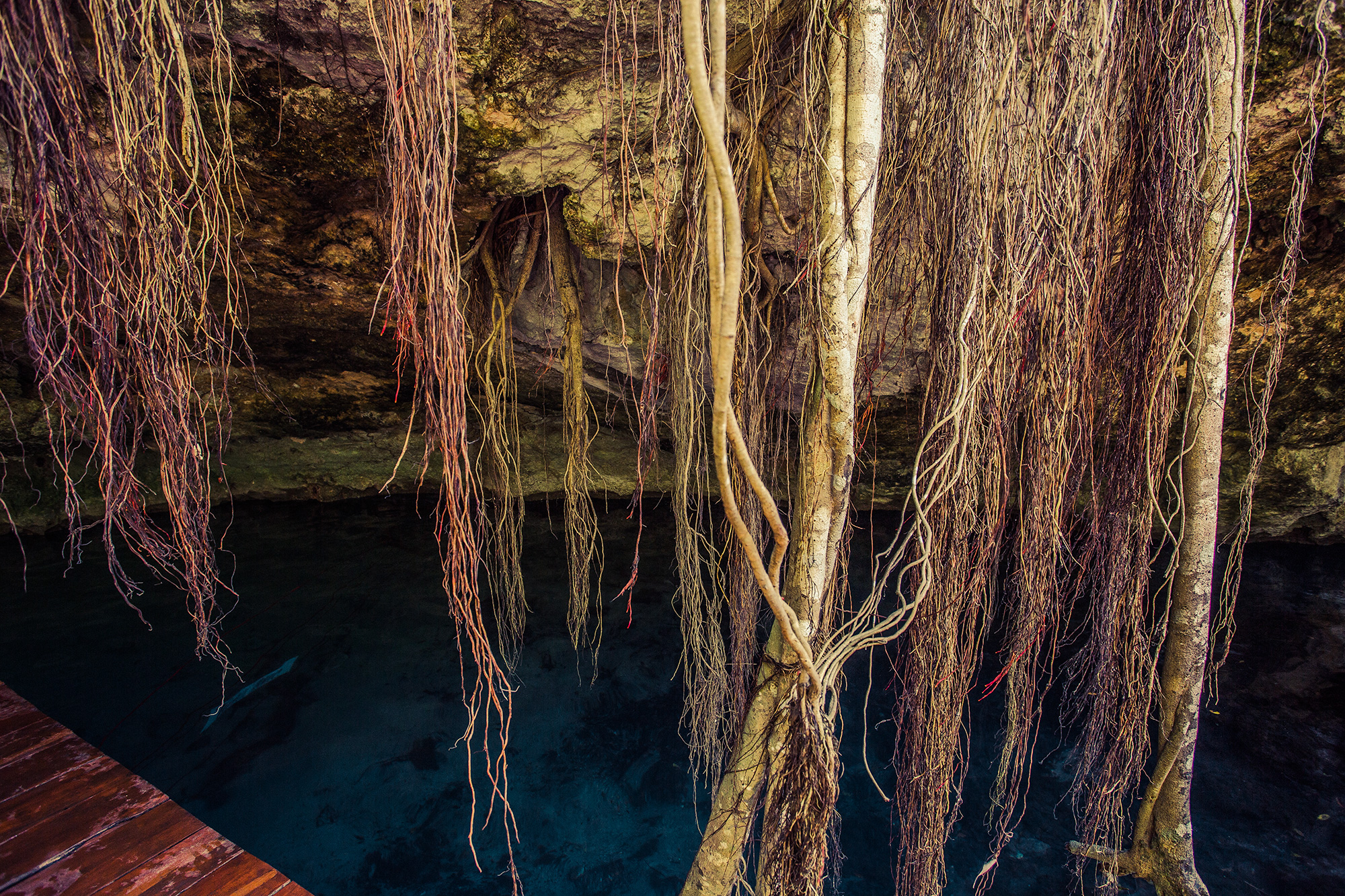 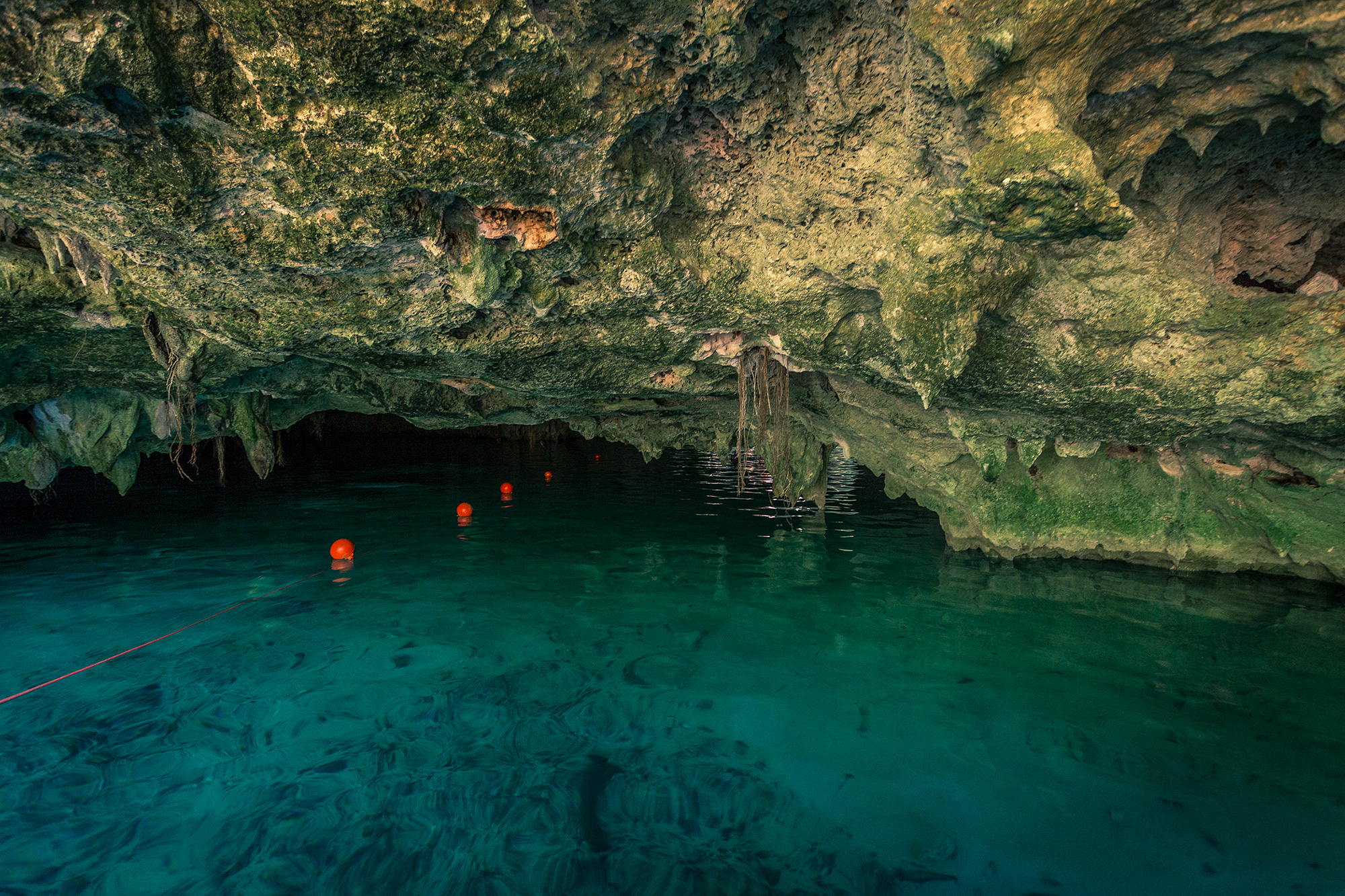 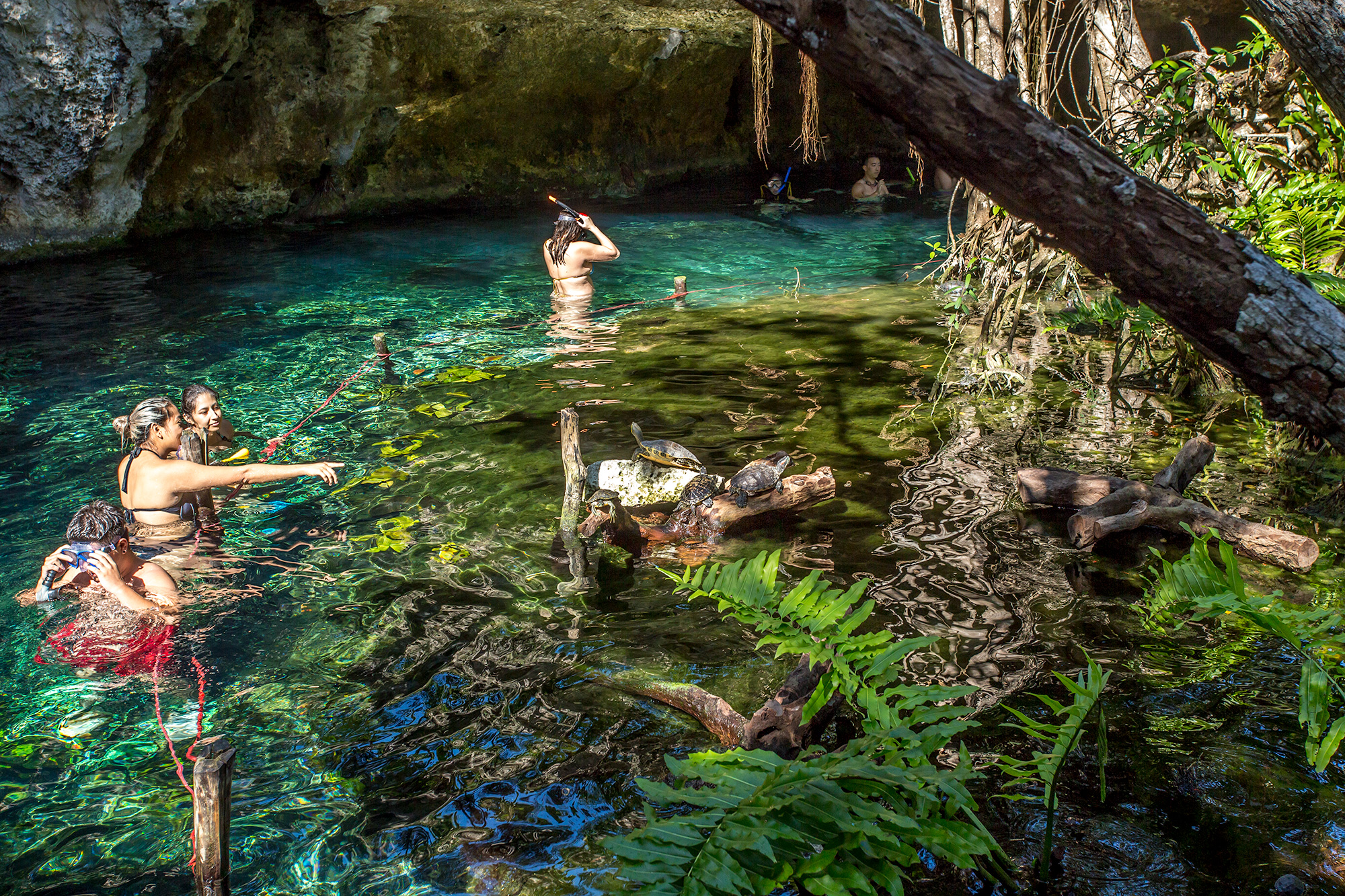 In the Gran Cenote I got to swim alongside turtles and bats! Well, to be honest, the bats didn’t do that much swimming with me, but still, they were there –  hanging upside down in the cave, and that was just so cool! Gran Cenote was without a doubt truly magical! Really, really a tip – in case you’re in Tulum! I recommend you take a swim here, even though it might not always be that clean to swim in cenotes nowadays in polluted Tulum.

Have you taken a swim in a cenote in Mexico? Maybe even here? Please leave a comment!