December 2016/January 2017 I spent a month as a volunteer in Zimbabwe on the wildlife orphanage Chipangali. For a longer period, I had felt kind of burned out or empty in my soul, if you will. My concerns for my health were growing and I felt a deep need for a vacation, but maybe not the regular beach type. I needed something different, so I stumbled upon this volunteer thing, and since I love animals I thought it would be easy to choose.

So anyway, I did choose, and spent a whole month at Chipangali Wildlife Orphanage in Zimbabwe, as a volunteer. Every day is basically a workday. Tuesday-Saturday were full days 08-17, and Sundays-Mondays halfdays, meaning you only worked during the mornings. Regardless of how tired you might be as a volunteer, the animals still needed food and water every day. That’s no surprise.[/dropcap]

The nursery was “ours”

The nursery “belonged” to the volunteers, our duty. Apart from the wild, hurt animals arriving here there, we also had smaller animals, like bugs and rabbits (well, yes, I did put insects under smaller animals – so be it!). 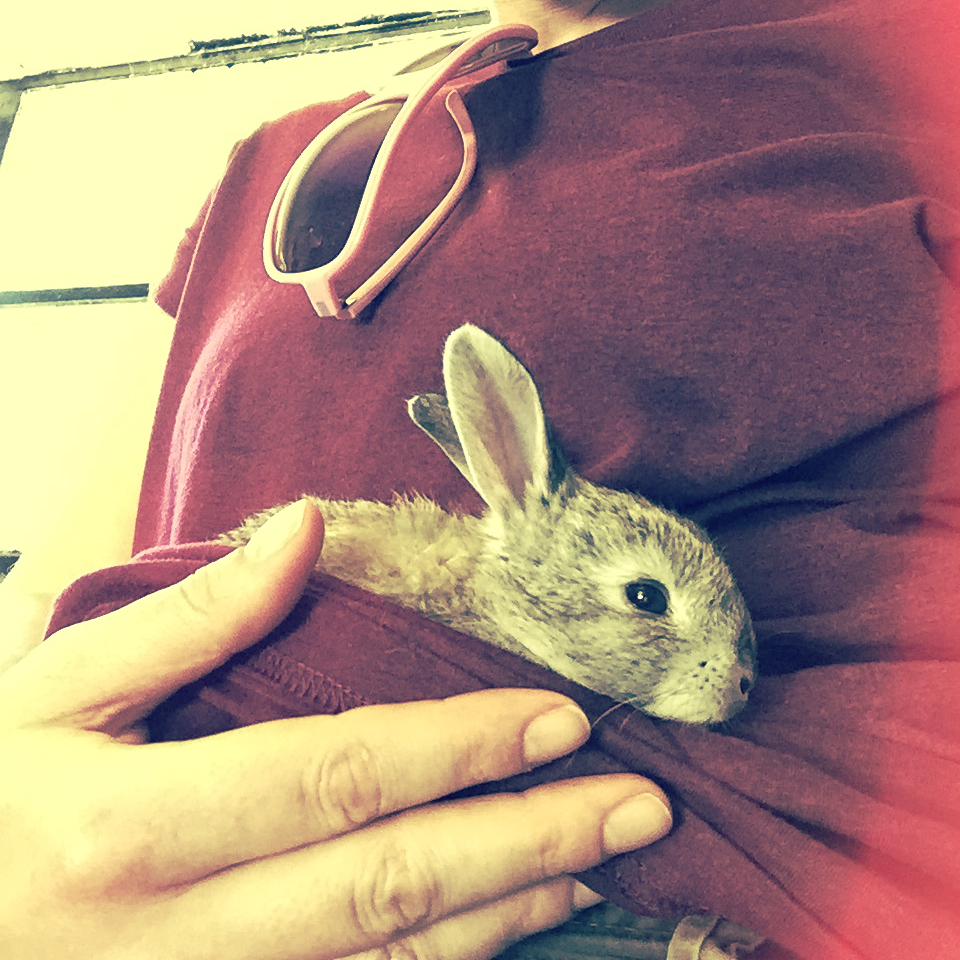 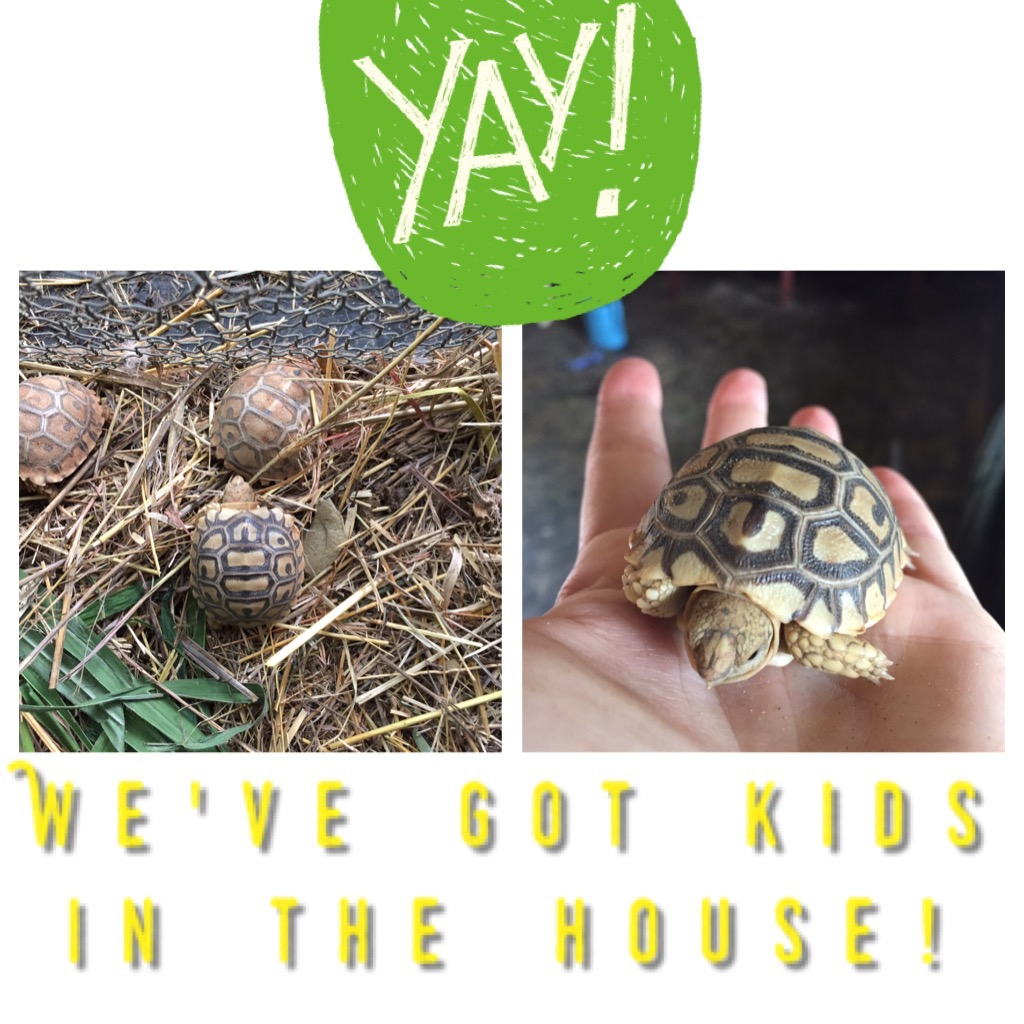 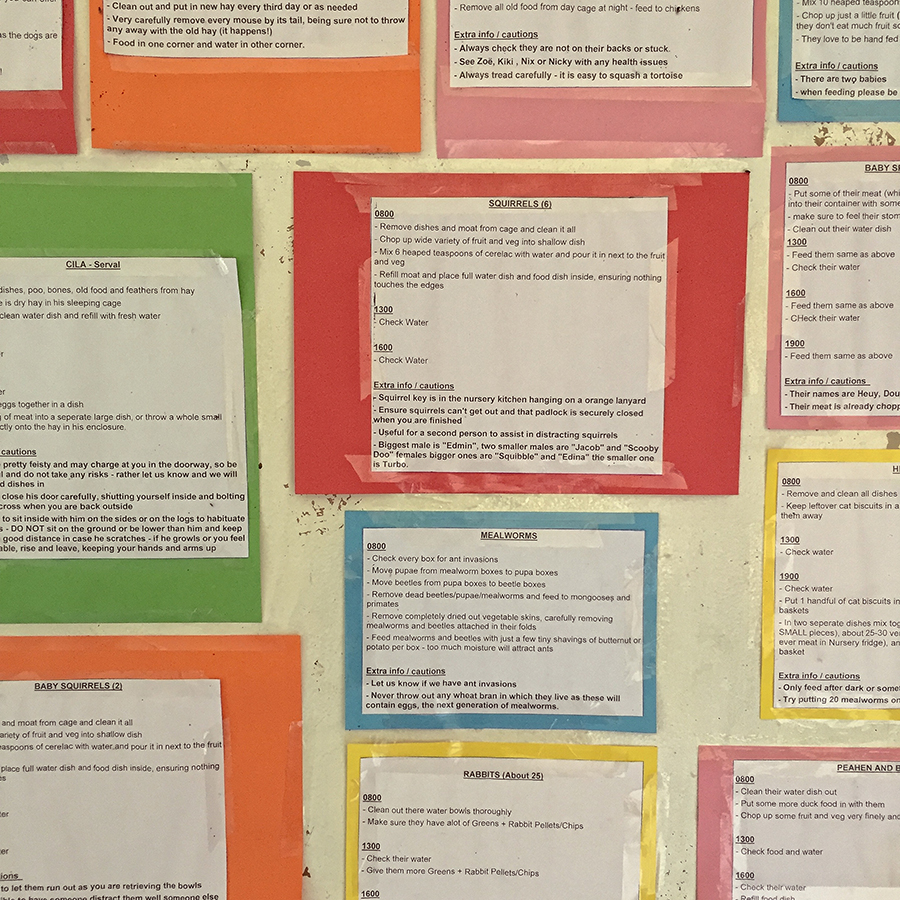 On the wall in the nursery, there were notes about each and every animal, and what type of food they should eat, as well as feeding/watering times. It was important to not deviate from this, since the wrong type of food could have fatal consequences for the animal.

Something we were tasked with was catching grasshoppers for the chameleon. This raised a whole heap of conflicting feelings within me. Without exaggerating one could say I was abruptly thrown into a smaller existential crisis!

Who was I to decide who should live or die? Just because some other random art, which had had the fortune of ending up on Chipangali, needed to be fed, someone else had to die…? Grey zone…

Who decides which art has the right to survival?

A while ago a friend of mine, who is a vegan, wrote a comment on FB to me regarding feeding our pets. He raised the question if it was right to kill other animals in order for the pets to survive. At that moment I had difficulty understanding his reasoning on a deeper plane since I felt it was only natural for animals to eat other animals. Speaking about cats, for instance – they can’t survive without meat.

All of a sudden I understood what he meant.

After overcoming my first impulse of slight phobia of catching insects I realised, to my absolute horror, I found the exercise rather amusing every time I managed to catch one. Pretty soon I had also gotten quite “good” at this horrendous task… This is not a proud moment of my life…

If they ever were to be released again, the wounded animals on Chipangali needed mending. However, depending on the damage, they might not make it back there in the wild, so some needed to stay.

In the nursery, we had a serval by the name of Cila, whose legs had been broken upon arrival – all four of them! Servals needs their legs to work because they jump all the time; especially during a hunt. Cila would never make it in the wild again, so now he had to spend the rest of his days on Chipangali. 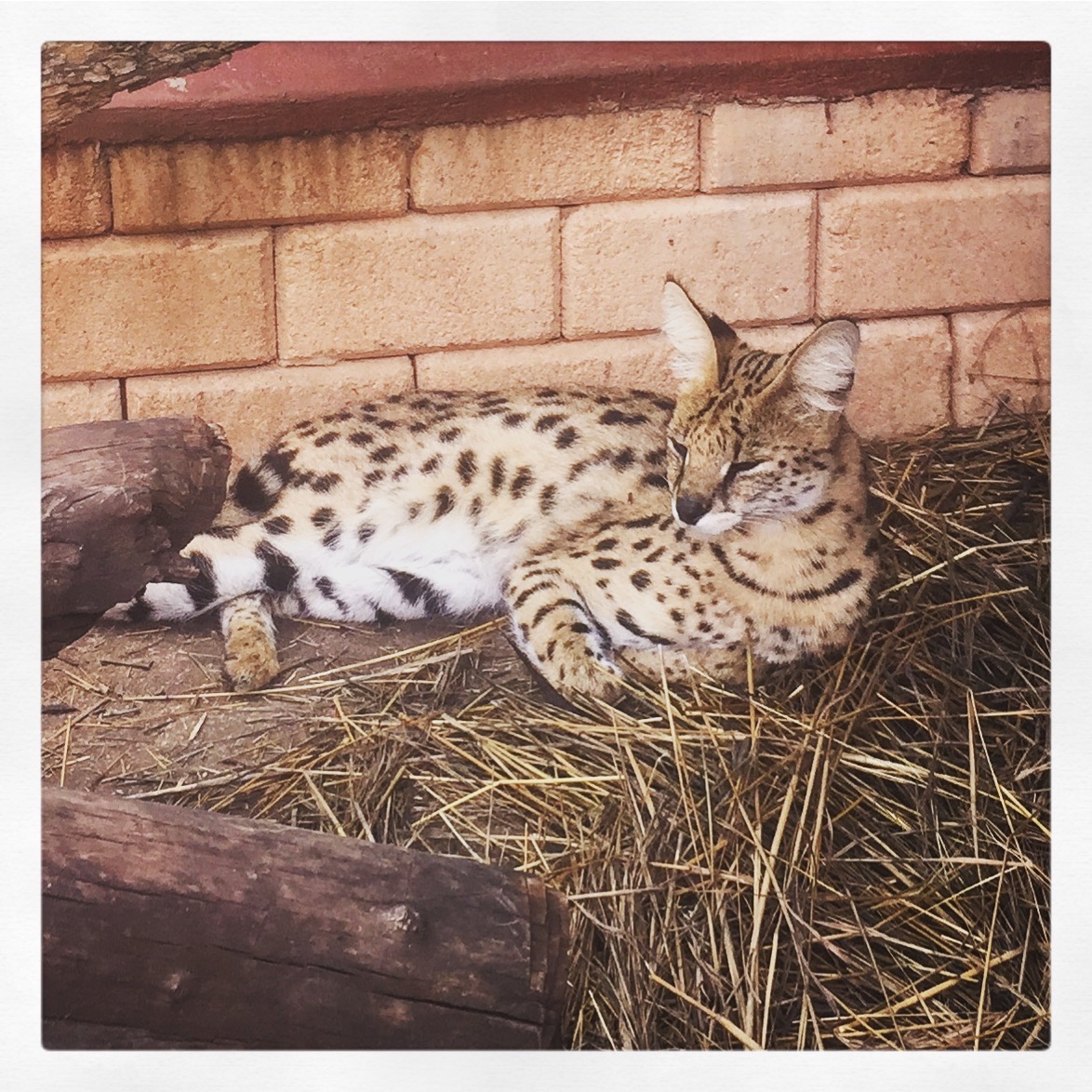 When Cila first came to Chipangali he had been very affectionate, but after a visit to the vet things had changed, and he let nonone near. Since he was a patient in the nursery, the volunteer’s responsibility, I met him every day, and he was one of those I got particularly attached to. I spent hours taking care of his cage; cleaning it, changing the straw, his food and water. In the beginning – the getting-to-know-each-other phase – there was a lot of small talk, but then we moved into deeper conversations, even though I have to admit they were somewhat one-sided… Well, he’s just the typical male I guess!

In the beginning he was kind of grumpy, hissing at me as soon as he saw me.

The same day I went back home I managed to get quite close to him without him hissing at me. He didn’t seem that interested in me, but at least he didn’t care I was standing there nose against nose. Allbeit on the other side of the fence, but still… That wasn’t even possible before.

Of course I saw this as a sign he’d finally accepted me. 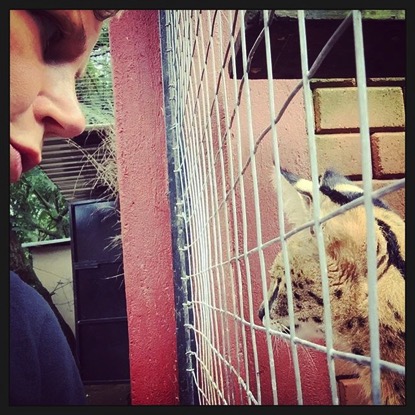 As a volunteer in Zimbabwe, and specifically on Chipangali, you also had to help out with most daily tasks. Or at least try it – if only once. One task I didn’t really try was butchering, or cutting up, an animal. As I mentioned in the post Animal sanctuary in Zimbabwe – Chipangali they regularly received dead animals on Chipangali they could use as food for the animals living there.

The volunteers were invited to join in the butchering, but noone was forced to perform this task. This particular task can be very provoking for some, so if you didn’t want to, that was totally fine. I decided to try, but the carcass stench was so rough I couldn’t even be in the so called butchery. Even though it was outside.

Butcher an animal? No, thank you…

In all honesty, I don’t believe I could’ve done it either – cut an animal in pieces. It’s hard enough cutting up a dead chicken for my Cila… I think my soft side is putting down its foot right here!

However, I did join – after the butchering – when they were feeding the meat to the large cats, and I only did this once too, since the pieces were so large it was hard for me to carry and hand over to the worker who then had to throw them over the fences! I am a broken woman after all, so I had to acknowledge my limitations – this was too much for my body to handle.

Another of my favourites was Karla – a female leopard. She was pretty tame, so it was possible to pet her through the fence, and her purrs… Truly magical! 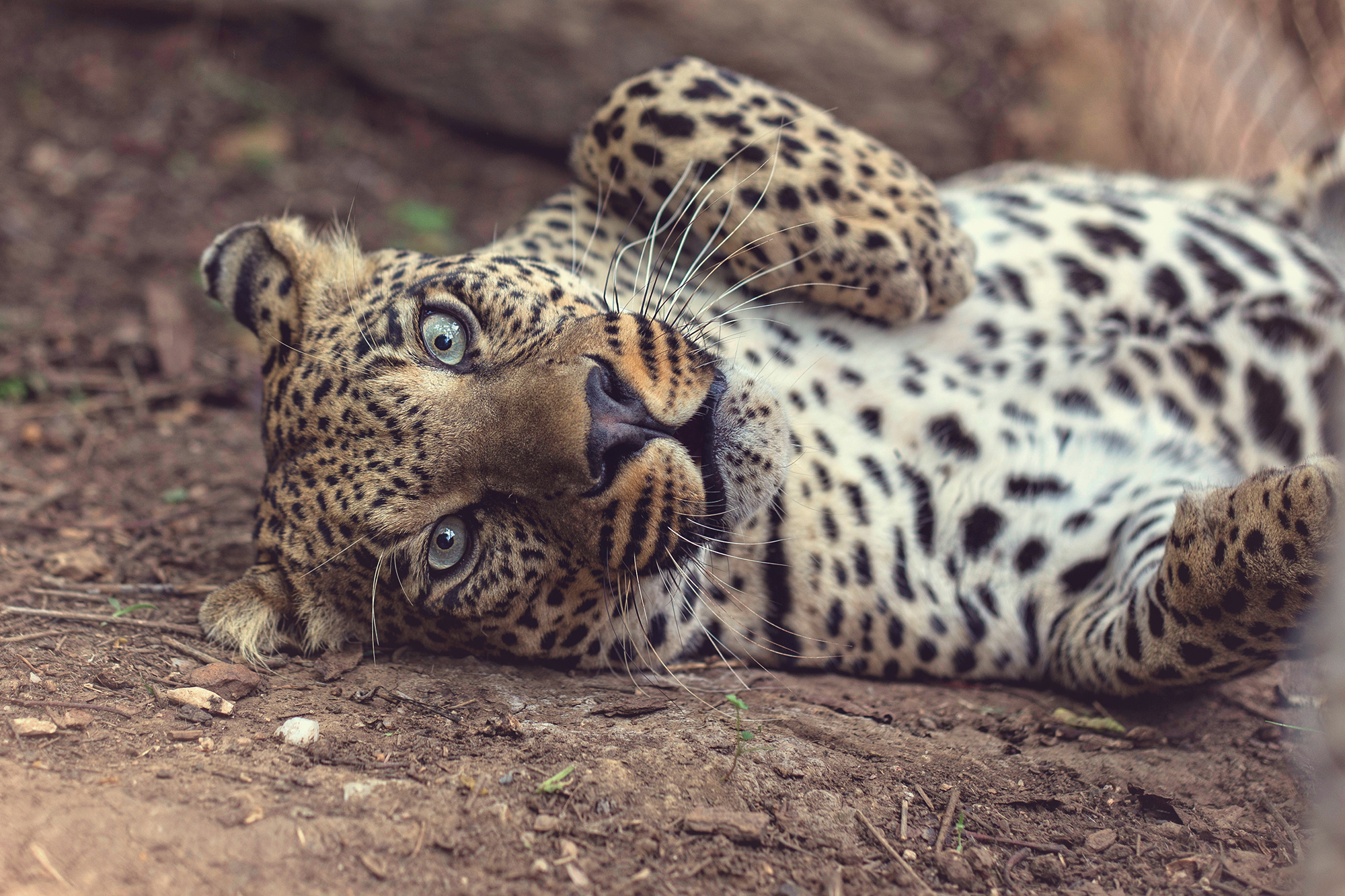 Apart from hanging out with the cats it was kind of cozy hanging out with the vervet monkeys. I stopped by their cage sometimes for some grooming, which basically meant they taking care of me, liberating me from lice and whatever… stuff they do. It was nice, relaxing. Like a free spa experience. 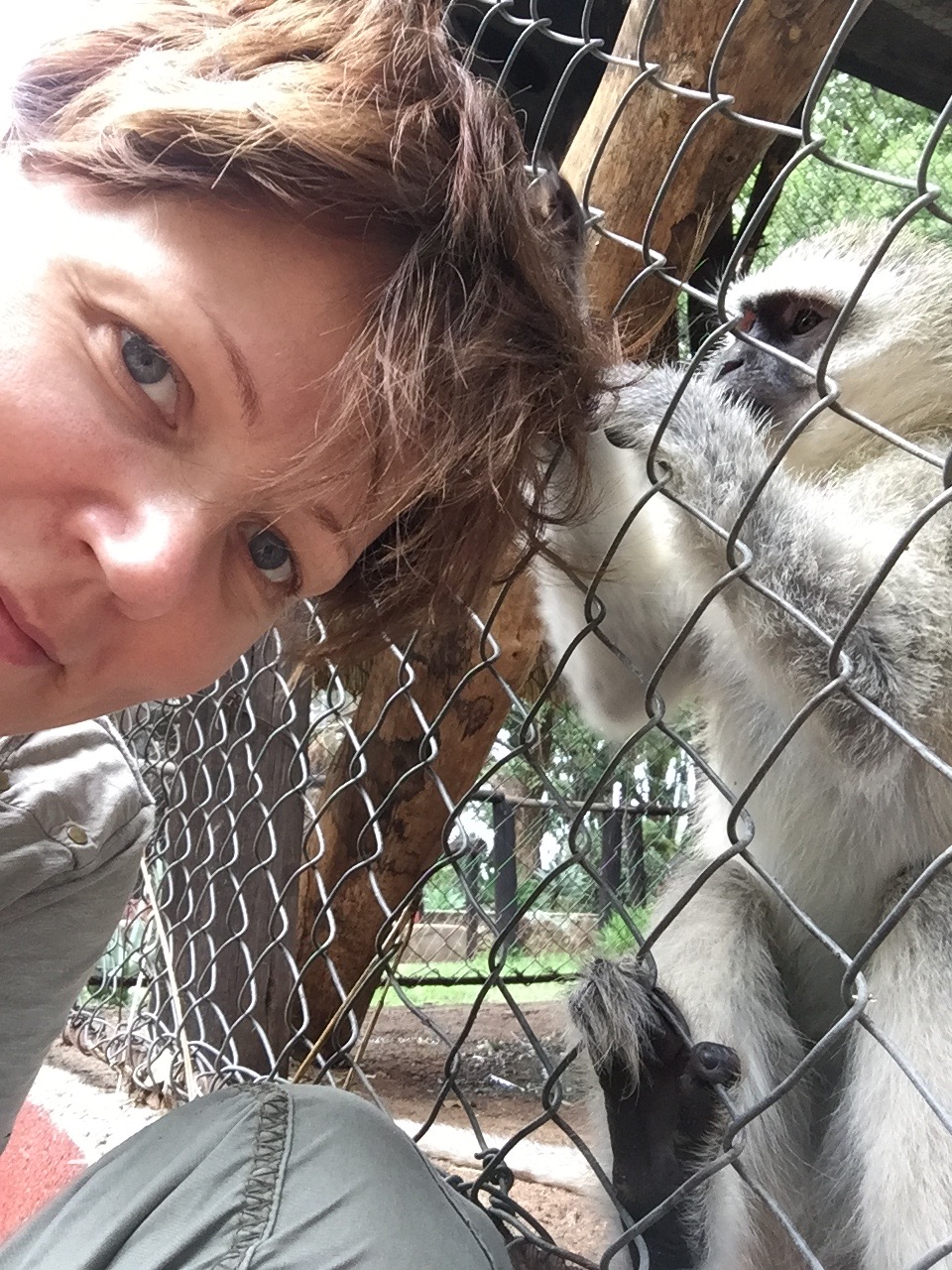 The family baby ripped my earring off and put it in his mouth!

I freaked out – could he swallow it? Choke to death? I ran to get the caretaker. We entered the cage and found the earring on the ground. Luckily noone had found it delicious or had the urge to swallow it!

As I mentioned above as a volunteer in Zimbabwe, or Chipangali, you had every Monday off and then you had the possibility to go into Bulawayo, which is about a 30-minute car ride from Chipangali. They dropped you off in a small mall in the outskirts of Bulawayo, so you didn’t really get anywhere in the city, but still… This was a nice place for volunteers to go, since there was a café offering free wifi here.

A couple of hours later they picked you up to go back to Chipangali.

The mall’s location was slightly off, so there wasn’t really anything else to do, and you couldn’t just walk into the city, so this is all there was in case you wanted to go into “the city”. Exploring was thus not an option.

For someone like me, a traveller soul, this was kind of boring and slightly limiting. However I understood the reason behind it – it is extremely hard to get gas in Zimbabwe – every time we passed by a gasstation there were these crazy lines. And there was no guarantee for getting gas in the end either, even though you’ve been in the queue for hours.

It is a corrupt country, so everything boils down to how much you’re willing to pay…

So I got it, but it was still boring. I was a volunteer in Zimbabwe – a country I’ll probably never visit again – but couldn’t really see anything at all. Had the gasproblem not been a problem I probably couldn’t have seen anything anyways, since Chipangali was pretty from Bulawayo, so no hope for a bicycle either. It wouldn’t have taken me anywhere. And were there wild animals outside?

However, as a volunteer in Zimbabwe you can’t miss out on the most beautiful waterfall in the country! Chipangali thus offered us a couple of days off to go to Victoria Falls, which was a magical experience. It was also quite nice to have a change of scenery. All of a sudden I felt like I actually was on vacation. 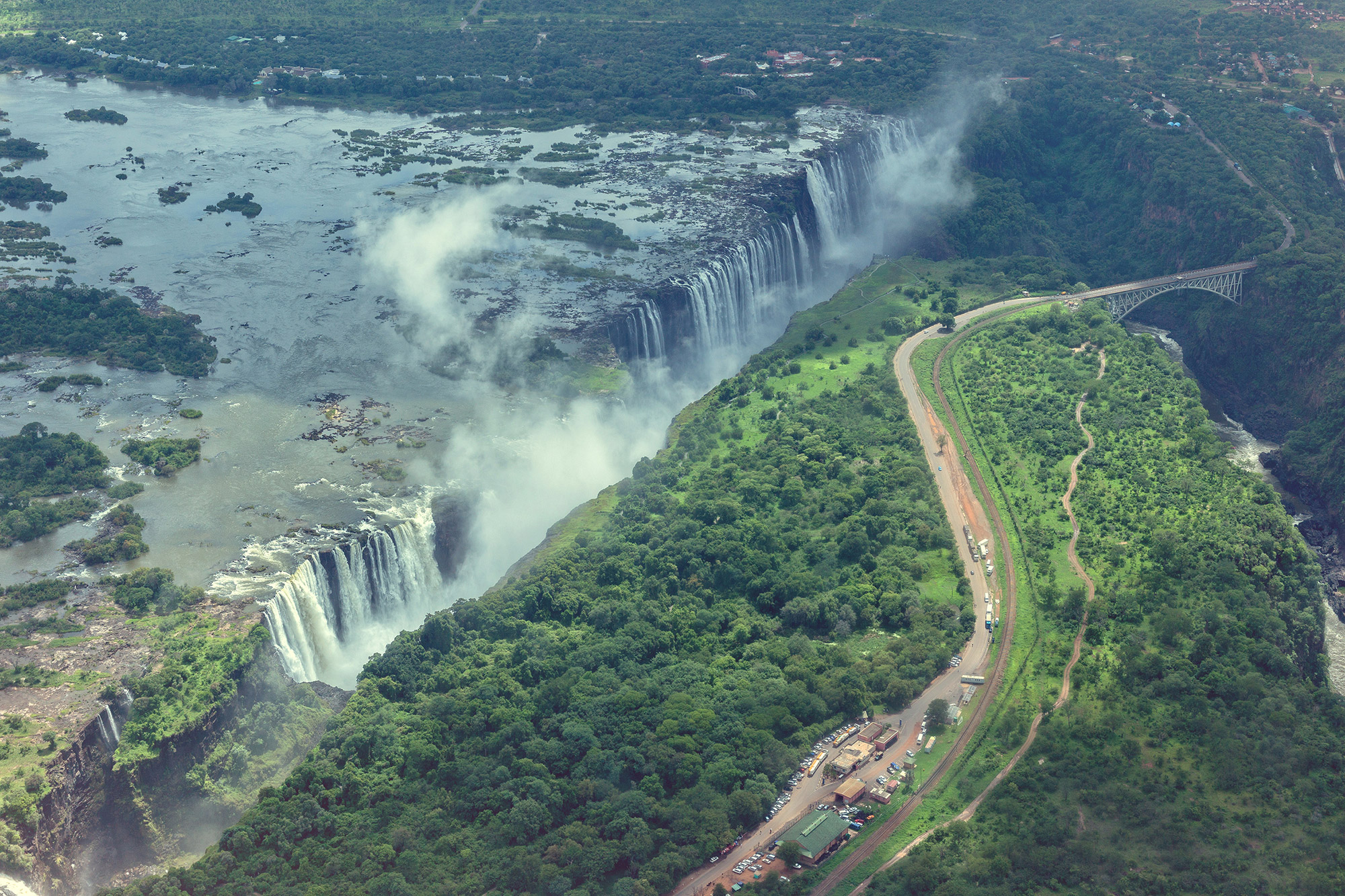 As it turned out, it did my soul good to put some time and effort into taking care of other individuals – and not humans this time. Working with something hard, boring and monotonous, was also good. I managed to heal quite a lot.

I just should’ve chosen a longer period than 1 month to be a volunteer in Zimbabwe. Since this was my first time as a volunteer I didn’t dare booking a longer trip, with regards to my neck injury. It could’ve easily been a disaster, since I had no idea how heavy it all would be!

All in all I must say it is very rewarding working as a volunteer in Zimbabwe, so if you’ve got the money you should try it. You’ll get so much in return, but keep in mind it is expensive, so make sure to pick wisely, and make sure you really want to do this.

I do hope I will make another one of these types of journeys one day soon.

Have you ever been volunteering? Where did you go? What was your experience? Did it give you something mentally, or feed your soul? Please leave a comment!